The Anthologist: A Compendium of Uncommon Collections

by
Staff
News and Trends
July/August 2022

Among the many new books published each season is a shelf full of notable anthologies, each one showcasing the work of writers united by genre, form, or theme. The Anthologist highlights a few recently released or forthcoming collections, including Body Language: Writers on Identity, Physicality, and Making Space for Ourselves. 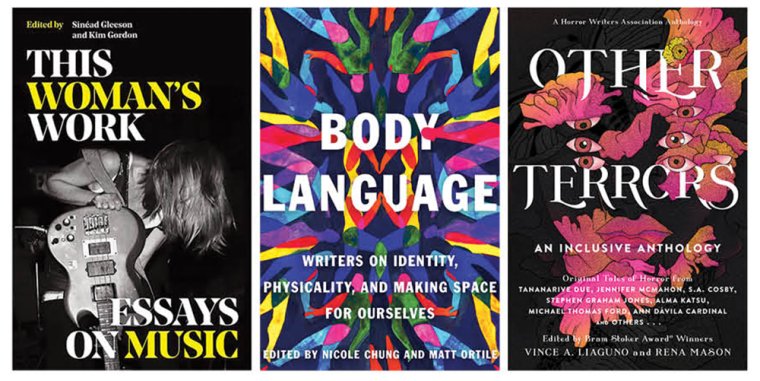 Kim Gordon, the female figurehead of rock band Sonic Youth, is now staking a claim for women in music writing. In This Woman’s Work: Essays on Music (Hachette, May 2022), Gordon and coeditor Sinéad Gleeson, an Irish Book Award–winning author, gather more than a dozen wide-ranging meditations on sound from Leslie Jamison, Rachel Kushner, Yiyun Li, Ottessa Moshfegh, and others. Contributors consider a range of subjects, from Moshfegh’s upbringing by a violist and a violinist to Li’s reflections on Communist propaganda tunes. Singer and composer Heather Leigh writes in her introduction that these “highly personal, lucidly detailed” essays “become songs themselves.”

Since its launch in 2015, Catapult magazine has provided a platform for writers to explore intersectional identities. Body Language: Writers on Identity, Physicality, and Making Space for Ourselves (Catapult, July 2022) is “an extension of that project,” write editors Nicole Chung and Matt Ortile, adding “nuance to personal and political conversations around human bodies.” Representing thirty writers—including Gabrielle Bellot, Destiny O. Birdsong, and Melissa Hung—this essay collection examines the experience of inhabiting a powerful, fat body; anti-Black racism in U.S. health care; chronic pain; and other visceral subjects.

Fear of the unknown, or “the other,” is at the heart of horror. But as more authors from “othered” identities—women, queer people, and writers of color—gain long-overdue access to publishing, they are reframing the genre’s conventional monsters “from villain to victim,” write Vince A. Liaguno and Rena Mason, editors of Other Terrors: An Inclusive Anthology (William Morrow, July 2022). S. A. Cosby conjures a contemporary revenge for the formerly enslaved and Holly Lyn Walrath explores a haunted home for female “lunatics,” among other spine-tingling tales that interrogate what—and who—terrifies us.

The Anthologist: A Compendium of Uncommon Collections
by Staff | News and Trends 2.16.22