This week’s installment of Ten Questions features Viet Thanh Nguyen, whose second novel, The Committed, is out today from Grove Press. In The Committed, Nguyen returns to the story of the unnamed narrator of his debut novel, The Sympathizer. After enduring a year in a communist reeducation camp and two years in an Indonesian refugee camp, the narrator has managed to reach Paris and gain shelter with his French Vietnamese “aunt.” He, along with his close friend Bon, turn to drug dealing to make their way in the new city. But the work becomes increasingly dangerous, and the narrator is wary of participating in such a decidedly capitalist business. Told with characteristic wit and intelligence, The Sympathizer is a nuanced examination of ideology and identity. “A rich and exhilarating story of friendship, loyalty, and greed,” writes Laila Lalami. “Viet Thanh Nguyen gives us an unsparing look at the poisonous effects of ideology—whether colonialism, communism, or capitalism—even as he explores the deep-seated need we all have to believe in something.” Viet Thanh Nguyen’s first novel, The Sympathizer, won the 2016 Pulitzer Prize for Fiction, among several other awards. He is also the author of the short story collection The Refugees and the nonfiction book Nothing Ever Dies: Vietnam and the Memory of War, which was a National Book Award finalist. He lives in Los Angeles. 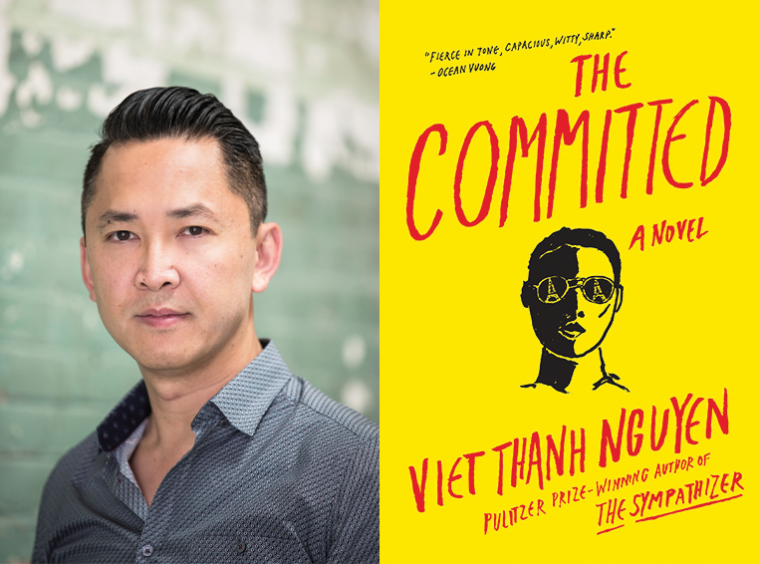 1. How long did it take you to write The Committed?
A bit over four years, from 2016 to early 2020. The novel would have been published in late 2020 but for the pandemic pushing everything back.

2. What is the earliest memory that you associate with the book?
How fun it was to start writing it in 2016. The Sympathizer had been a success, but it hadn’t yet won a Pulitzer Prize, so I was still left alone to enjoy the writing.

3. What was the most challenging thing about writing the book?
Coping with all the attention and expectations the Pulitzer brought. It was very distracting and prolonged the writing of the book by at least a year, maybe two.

4. Where, when, and how often do you write?
When I’m not teaching, I write four hours or one thousand words a day, whichever comes first. When I am teaching, I write a few days a week, nothing during grading, and mostly during holidays and summers. Most of my life, I wrote in a corner of a bedroom, facing a wall. Now I’m lucky to have my own office with a view of my garden.

5. What are you reading right now?
Many incredible books for the Aspen Words Literary Prize and the Pulitzer Prize. The Aspen Words longlist is public and I highly recommend it. The Pulitzer Prize is confidential so you’ll have to wait until the nominations and winners are announced in April.

6. Which author, in your opinion, deserves wider recognition?
Edward P. Jones. He won a Pulitzer Prize for The Known World, but he’s a modest man who doesn’t indulge in publicity, so he’s not as well-known as he deserves to be. His Lost in the City is one of the great short story collections. I love that book.

7. What trait do you most value in your editor (or agent)?
Their ability to understand what I want to do and their willingness to suggest what I need to cut.

8. What is one thing you might change about the writing community or publishing industry?
Eliminate blurbs. They are a tax on the writers and editors who have to ask for them, and the writers who have to write them. I’ve been on both sides. Just publish books without blurbs and let readers decide.

9. What, if anything, will you miss most about working on the book?
It was set in Paris and gave me a reason to spend more time there, including two full summers. I haven’t been back since the pandemic and look forward to returning in summer 2022, if not sooner.

10. What’s the best piece of writing advice you’ve ever heard?
I found Haruki Murakami’s What I Talk About When I Talk About Running to be the most inspirational book about writing, even though it’s explicitly about running. But that’s what writing is. You get up and you go and run every day, or as many days of the week as you can, for as long as you can, and you do it over and over and over and over until you can’t do it anymore, and it is an experience that is both repetitive and inspiring, painful and exhilarating. That’s writing.

“I hate saying goodbye.” —Alex Dimitrov, author of Love and Other Poems

“Commit to completing a scene each time you write” —Randa Jarrar, author of Love Is an Ex-Country