This week’s installment of Ten Questions features NoViolet Bulawayo, whose second novel, Glory, is out today from Viking. The novel opens onto a crowded square on Independence Day in Jidada, a fictional African country populated by animal citizens. Some animals attempt to escape the heat and leave early but are pushed back by military dogs—“violent, morbid beasts”—who later brutalize protestors who disrupt the Father of the Nation’s speech. Throughout the novel, Bulawayo expertly renders such dramatic set-pieces of dictatorship and revolution, while also zooming in on the stories of individual animals, their wounds and resilience. Both witty and harrowing, Glory is inspired by the aftermath of the 2017 removal of Robert Mugabe in Zimbabwe, but the novel offers insight into the cruel absurdities of politics the world over. “Bulawayo keenly displays the perspectives of political players and the civilians who bear the brunt of their violence,” writes Publishers Weekly. “With satire that feels necessary and urgent, Bulawayo brings clarity to a murky political morass.” NoViolet Bulawayo is the author of We Need New Names (Reagan Arthur Books, 2013), which was a finalist for the Booker Prize and won the PEN/Hemingway Award, the Art Seidenbaum Award for First Fiction, a Hurston/Wright Legacy Award, and the Etisalat Prize for Literature. She grew up in Zimbabwe and lives in the United States. 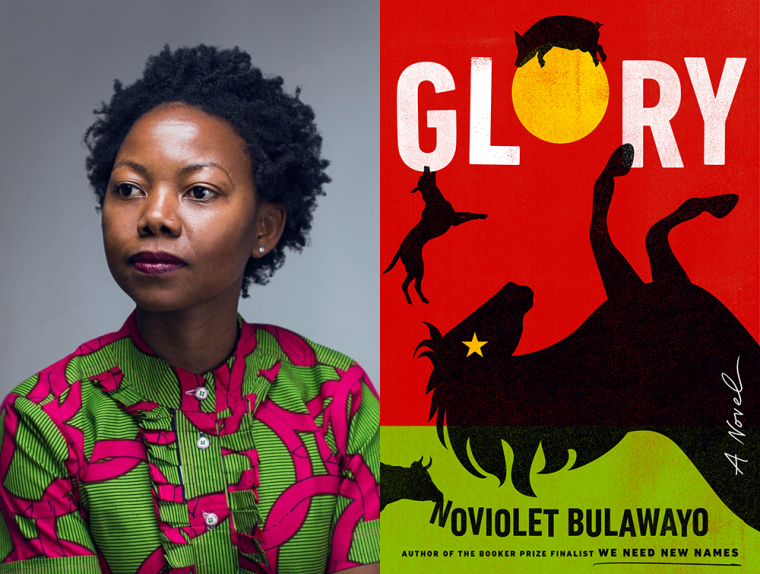 1. How long did it take you to write Glory?
About three and a half years of the most intense focus I’ve ever had to pull off, an experience that reminds me that sometimes we write only because of those who make it possible for us to do so. I’m especially grateful to all who supported me during that time, including the then-director of creative writing at Stanford, the late Eavan Boland, who understood my near desperate need to go to the wilderness, and sent me off with such grace, understanding, and encouragement.

2. What was the most challenging thing about writing the book?
Writing against an unfolding public narrative driven by forces I couldn’t control sometimes complicated the story’s focus, raised questions like how much of new storylines to include or leave out, how to reconcile unforeseen traits or actions with a character I’d framed a specific way. Still, working through these issues gave me the opportunity to really push my imagination in interesting ways.

3. Where, when, and how often do you write?
It depends on the project, but I generally write when the draft that happens in the head is ready to come to the page. Whatever it is will normally tell me how it wants to be done; Glory demanded to be written every day, beginning in the wee hours of morning till about late evening. The first shift was the bed-shift (I insist on large, comfortable beds for this purpose); the second and the third shifts were divided between my apartment and an office. I must work in isolation because my process tends to be messy.

4. What are you reading right now?
Lost in the City by Edward P. Jones, one of my favorite books to reread.

5. Which author, in your opinion, deserves wider recognition?
Far too many to mention. It’s strange to pick just one author when the world is full of incredible writers who aren’t recognized, but outside of the spotlight is where one finds some of the most surprising and exciting work.

6. What is one thing you might change about the writing community or publishing industry?
I’d get rid of the gatekeeping at every level so we not only have a fair system, but also one that reflects the real world.

7. What is one thing that your agent or editor told you during the process of publishing this book that stuck with you?
Somewhere in the preliminary drafts (Glory was a monster of about 700 pages then) my editor mentioned in her comments to figure out how to maintain the steam; this really helped me keep my finger on the pulse of the story, and of course with the much-needed pairing and polishing.

8. If you could go back in time and talk to the earlier you, before you started Glory, what would you say?
I’d tell me to proper brace up; I wasn’t ready for how much this novel would demand.

9. Who is your most trusted reader of your work and why?
My agent and editors are my trusted dream team; for their critical but caring eyes, for being ready to say what must be said, no matter how difficult, for their generosity, and most importantly, for understanding me. What they brought to Glory, and how they handled the project especially in its infancy, thoroughly humbles me. I don’t even know how to thank them.

10. What’s the best piece of writing advice you’ve ever heard?
“Figure out how you work best.” ⏤Toni Morrison

END_OF_DOCUMENT_TOKEN_TO_BE_REPLACED

“Then summer came and there was a lightning moment.” —Yanyi, author of Dream of the Divided Field

“What if there was an agency that verified people’s online dating personas?” —Jane Pek, author of The Verifiers

“How do you navigate a life in opposition to and in spite of systemic racism, with poetry?” —Angel Dominguez, author of Desgraciado