This week’s installment of Ten Questions features Marie NDiaye and Jordan Stump, the author and the translator of the novel That Time of Year, which is out today from Two Lines Press. In a remote village in the French countryside, a vacationing Parisian named Herman becomes distressed when his wife and son do not return from a trip to purchase eggs. This was meant to be last day of their vacation, and Herman was eager to return to the city after the idyllic weather had abruptly given way to a chilly rain. Anxiously traversing the community in search of his family, Herman suddenly finds the once amiable locals unnerving. They reply to his urgent queries with vacant smiles, that “time-honored duty to treat visitors courteously, overlook any offense…despite what they might be feeling inside,” and Herman’s mission and resolve appear increasingly fragile. First published in French in 1994, That Time of Year is an eerie literary thriller about conformity, social stratification, and otherness. “Marie NDiaye is one of my favorite living writers and That Time of Year is yet another shape-shifting masterpiece,” writes Laura van den Berg. Marie NDiaye is the author of more than fifteen novels, short story collections, and plays. Born in Pithiviers, France, she has received the Prix Femina and the Prix Goncourt, the country’s highest literary honor. In addition to That Time of Year, Jordan Stump has translated numerous other works by NDiaye, including Ladivine, which was longlisted for the International Booker Prize in 2016. His other translations from French include books by Jean-Philippe Toussaint, Eric Chevillard, and Claude Simon. 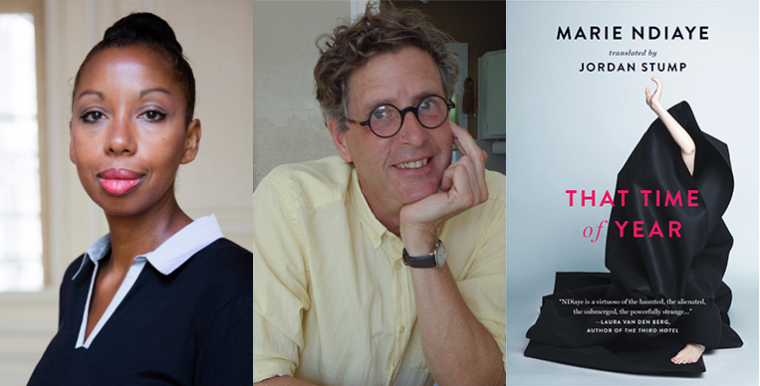 Marie NDiaye and Jordan Stump, the author and the translator of That Time of Year.  (Credit: NDiaye: Francesca Mantovani)

Jordan Stump: Probably about a year, but not a year of solid work—I was translating other books while I was doing this one, and I also have to fit my work as a translator into my teaching schedule.

2. What was the most challenging thing about the project?
Marie NDiaye: At the time I’d recently moved to Cormeilles, a village in Normandy that gets a great many tourists from Paris and Great Britain in the summer. I had to learn to live in that village after the summer was over, after the bustle and the sort of artificial but still agreeable cheeriness that visitors bring with them. The idea of the novel grew out of that experience: How does one live in a village when nothing comes in from outside to provide some sort of diversion? This was long before the internet, so distractions and ways of escaping the little world of village were much more limited.

Jordan Stump: NDiaye’s writing is so beautiful, so distinctive—when I first tried to translate one of her books, years ago, I gave up in despair after a few pages. I just couldn’t figure out how to write her voice in English in a way that sounded like her voice. I kept trying. In the end I think I more or less learned to translate her writing, but that doesn’t stop every new book from confronting me with the same challenge as that first one: How to duplicate in a second form something that is so entirely and so magnificently itself alone?

Jordan Stump: I try to translate every day, even if it’s just a few lines, or even if I’m revising more than I am translating. I probably spend ten hours revising for every hour I spend actually turning the French into English. I work wherever I can: at home, or during office hours at the university, or on airplanes—back when people took airplanes.

4. What are you reading right now?
Marie NDiaye: An anthology of contemporary French poetry. At the same time, a rereading: E. M. Forster’s A Passage to India. And also—I always read several books at a time, at different times of the day or night—Lydia Chukovskaya’s journal of her conversations with Anna Akhmatova.

Jordan Stump: In all honesty, I’m just finishing up reading the books I’m teaching this semester—I like assigning books I haven’t read before. I’m doing a class on contemporary writing in French by women: Just now it’s Celles qui attendent by Fatou Diome.

5. Which author, in your opinion, deserves wider recognition?
Marie NDiaye: Hélène Bessette, a postwar French writer whose prose, at once concrete and lyrical, produces in the reader a delicious feeling of suffocation.

Jordan Stump: Well, Marie NDiaye, since you ask. At least in this country.

6. What is one thing you might change about the literary community or publishing industry?
Marie NDiaye: I don’t know.

Jordan Stump: I don’t really have any complaints—I think there’s far more openness to translated works and to adventurous writing from the non-English-speaking world today than there was even just ten years ago, and I see that as a glorious development.

7. What is one thing that your agent or editor told you during the process of publishing this book that stuck with you?
Marie NDiaye: There wasn’t anything like that.

Jordan Stump: No one thing, but I’ll be forever grateful to CJ Evans at Two Lines Press for his enthusiastic embrace of writers like NDiaye and for his unfailingly sensitive and thoughtful editorial suggestions.

8. What is the biggest impediment to your creative life?
Marie NDiaye: Social life, going out to see people. I always have trouble working after I’ve spent a long time in conversation.

9. Who is your most trusted reader of your work and why?
Marie NDiaye: Jean-Yves Cendrey, my husband, a writer himself. He’s always the first person who reads what I write. His feel for language and his perceptive sense of the “outline” of a novel, possible weaknesses in the plot, are remarkable. I always make some fundamental changes to my work after he’s read it.

Jordan Stump: My wife, Eleanor Hardin. She always reads my translations before they’re published, and I’ve found that her ear and her eye—for both what’s right and what’s wrong—are simply without peer.

10. What’s the best piece of creative advice you’ve ever heard?
Marie NDiaye: When I was twelve years old and my French teacher, after he’d read my composition, told me, “You’re going to write books, I’m sure of it.”

A very elegant sentence, more or less impossible to translate—it plays on two senses of the word ouvrage—but the meaning is at once simple and profound: Constant revision and rethinking are the key to artistic creation. You’ve got to “put your work back on the table twenty times” before it’s done.

“The glimmer of an idea appears in my notebook long before I begin writing.” —Daisy Johnson, author of Sisters