This week’s installment of Ten Questions features Gala Mukomolova, whose debut poetry collection, Without Protection, is out today from Coffee House Press. Mukomolova, who arrived with her family in New York when she was ten years old as a Jewish refugee from Russia, weaves together personal narrative and fable in her poems to interrogate ideas of identity, family, sexuality, and violence. Taking inspiration from Slavic folklore, several of Mukomolova’s poems reimagine the story of Vasilyssa, the young girl left to fend for herself against the witch Baba Yaga, to explore the ways in which a queer immigrant woman situates herself in a new country, navigating trauma, homophobia, displacement, and desire. Mukomolova earned an MFA from the University of Michigan and is the author of the chapbook One Above One Below: Positions & Lamentations (YesYes Books, 2018). Her poems and essays have appeared in Poetry, PEN American, PANK, and elsewhere, and in 2016 she won the 92 Street Y Discovery/Boston Review Poetry Prize. She also writes horoscopes and articles on astrology for NYLON. 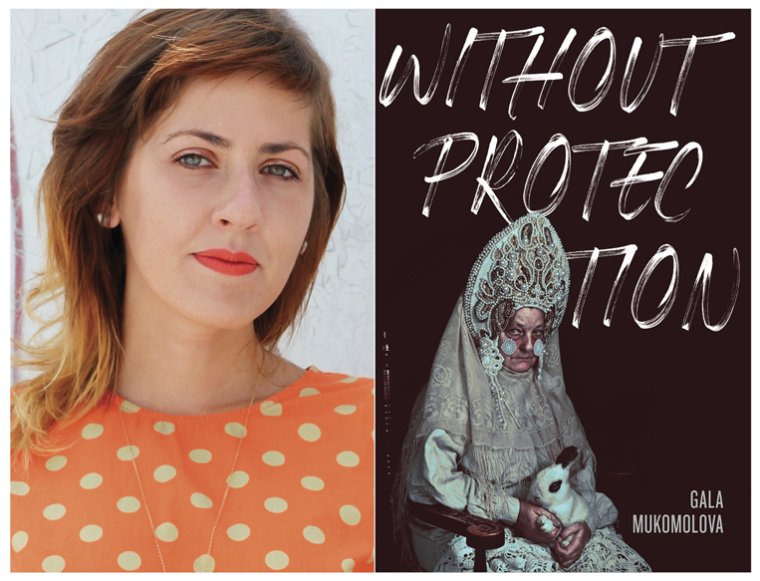 Gala Mukomolova, author of Without Protection.

1. How long did it take you to write Without Protection?
Without Protection took me anywhere between four and six years to write. Primarily because the Vasilyssa poems were originally from a separate project. Although, in hindsight, I can see how they were gathering together like a coven that would eventually conjure up the rest of the book.

2. What was the most challenging thing about writing the book?
Living through it was the most challenging thing. I wrote this book through some of the hardest, darkest moments in my young life. I wrote it through dealing with my father’s death and my long-term girlfriend’s departure. I wrote it through the pain of opening my heart again and through the inevitable heartbreak that resulted. Sometimes writing these poems was a reminder that I was still alive and sometimes I resented the reminder.

3. Where, when, and how often do you write?
I write all the time but I often do it for work which, if you don’t know, really gets in the way of what some might call the poet’s call. My astrology writings are a place where I exercise my creative freedoms, and I write articles sometimes twice a week. I’m surprised at what lyricism NYLON lets me publish. I’m grateful for it. Otherwise, when I’m avoiding admin work or emotional work, a poem will come to me. Sometimes every week or so, sometimes nothing for months.

4. What was the most unexpected thing about the publication process?
How I stopped being able to see the book. I felt almost blind to it. I had to look at each edited line individually like a bird fallen from the nest that I had to tenderly brush off and return.

6. Which author, in your opinion, deserves wider recognition?
francine j. harris is a poetic genius with a smoky quartz for a heart and she should have many awards and many readers and possibly a temple devoted to her where one leaves sweet little offerings.

7. What is one thing you’d change about the literary community and/or the publishing business?
I’m not in the publishing business and don’t feel I have enough information to speak to that but in terms of the literary community, one thing I would change is the obsession people at large seem to develop with that one good white man. The moment one good white man appears to exist, people are ready to tattoo that man’s poems all over their bodies and eat their words like holy wafers.

8. What is the biggest impediment to your writing life?
Coming from financial precarity, living without a net, and spending most of my time hustling to makes ends meet is a pretty huge impediment. That and all the dissociation—but sometimes it does work in my favor, like when the paper swallows me like a genie bottle.

9. What trait do you most value in an editor?
The ability to approach the poem, not as they would want it but as they have perceived you, the writer, aiming to approach it. An editor who crafts a new lens for each writer they work with.

10. What’s the best piece of writing advice you’ve ever heard?
If what you’re writing begins to scare you, don’t stop—it’s about to get real good.

“There’s a lot of mystery in my writing process, and I have the suspicion that I’m doing all the steps out of order.” —Emily Skaja, author of Brute

“I usually wait until I need to write, which makes for a really thrilling, cathartic experience of creation.” —Hala Alyan, author of The Twenty-Ninth Year