It is a warm, spring Wednesday in Tirana as I cross the tree-lined café district with my translator, Altin Fortuzi, through the once infamous Blloku (The Block) neighborhood, on our way to meet with a group of Albanian writers and poets. During the reign of the Stalinist dictator Enver Hoxha, who served as the head of state of Albania from 1944 until his death in 1985, only the party elites were permitted to enter Blloku, but now it’s home to shady cafés, mobile phone outlets, upscale clothing stores, and brightly-painted bars; even Hoxha’s former villa has been turned into a restaurant. We pass the now-defunct museum to the deceased dictator, a concrete shrine—its architect appears to have hoped it would resemble a rising sun but it looks more like a squashed grouper—now mercifully stripped of its former marble façade and repurposed as a state television studio.

Tirana is surrounded by green mountains topped with swatches of snow even in mid April; to the north are the Albanian Alps, also called the Accursed Mountains. South and west, the mountains continue to the Adriatic and the Mediterranean eventually plunging to white sand beaches.

Albania borders Greece to the south, Macedonia to the east, and Montenegro and Kosovo to the north. Its ancient Illyrian people are referred to in classical Greek and Roman texts. Today, the conical felt cap—the pileus—worn by Odysseus in Homer’s epic can still be found on the heads of Albanian farmers.

In the 15th century, Albania was the European sore thumb of the Ottoman empire, constantly getting whacked by incursions and excursions. The Muslim Ottomans famously Shanghaied young Christian Albanians, pressing them to fight in their mercenary armies where, devoid of roots, they occasionally grew to overwhelm their masters. One Albanian conscript in the Ottoman ranks cut off a piece of the empire in the 15th century and kept it for himself. Popularly called Skanderbeg, he carved out a buffer zone between the Ottoman Empire and the Italian city states, selling his services back and forth while maintaining territorial hegemony over a proto-Albania for a few years in the middle of the early Renaissance. Today, a bronze statue of the hero, on horseback with raised sword and horned helmet, overlooks Tirana’s Skanderbeg Square, the marble-tiled communist-era parade grounds. 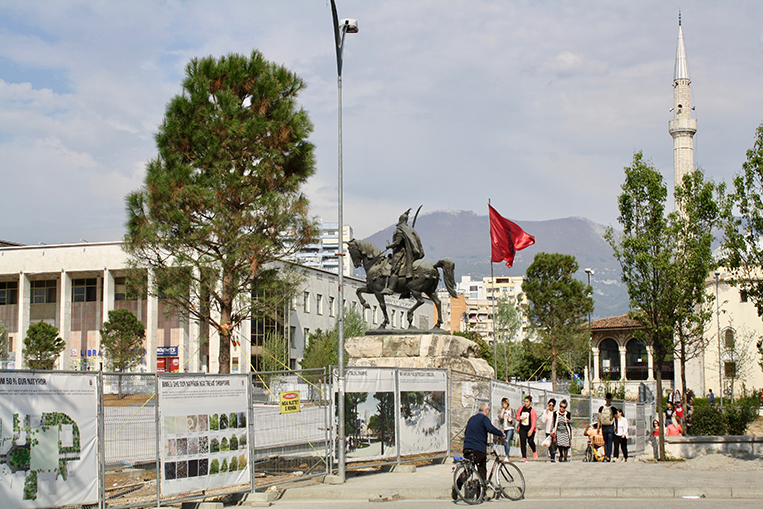 Our first meeting is with poet and novelist Arlinda Guma at a restaurant, bookshop, and small publishing house called E7E. Located in the downtown, the café and independent bookstore was founded by a loose and temporary coalition of poets and writers who, in the waning days of the communist dictatorship, transformed the home of the poet, essayist, painter, and rock lyricist Ervin Hatibi into a meeting space for writers, artists, and creative types. The name comes from a bit of Albanian wordplay: E7E stands for E përshtatshme, which means “suitable,” but this can be shortened using texting slang and written as E për7shme. The founders of the café shortened it further to E7E, which also refers to their early goal of publishing a literary arts newsletter every seventh day of the month (i.e. the 7th, 17th, and 27th). We sit at a small table in the open courtyard among other customers.

“I don’t read bestsellers and I’m a little bit ashamed of the name writer,” says Guma. “In Albania, a driver of a politician is more respected than a person of culture.” 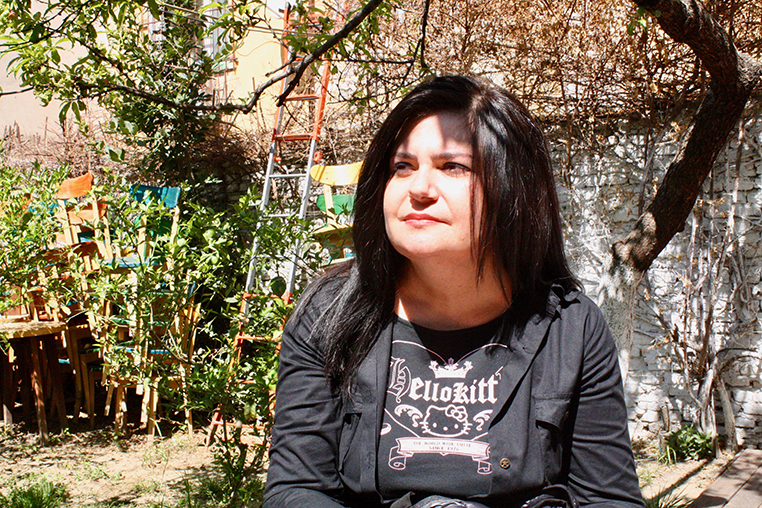 Guma has written and published two novels and a collection of poetry while working as an office assistant and assistant accountant for various organizations, including an arm of the European Union and an Italian firm. She is annoyed that it isn’t easier for a writer of literary fiction to make a sustainable income.

Writers typically bear the costs of printing their own books in Albania, she says, while the publishing house handles distribution to bookstores. “When I have to meet a publisher I feel like a child who is afraid of going to the dentist,” she says. “For them it doesn’t matter if you are talented or not, for them what matters is how much you will pay, because in Albania the writer has to pay the publisher [to print] the book.” When a book sells, the writer gets a portion of the cover price, usually 55 percent.

Guma’s annoyance over the fate of artists and writers in Albania’s capitalist economy may reflect the fact that she can remember a time when writers were selected then supported by the communist state. The end of communism has brought greater freedom—anybody can choose to be a writer—but greater freedom, in this instance, also means more uncertainty. There is no guarantee that a writer will earn any money from their work.

Guma’s first novel, Bulevardi i yjeve (Stars Boulevard), which she self-published in 2014, follows characters in a mental hospital, and her second, Terma humanitare si fjala bombardim (Humanitarian Terms Like the Word Bombardment), released two years later, in 2016, is based on a true story about a tragi-comic bombardment of a UN Humanitarian mission during the U.S. war in Afghanistan. Stars Boulevard was praised by some French academics, and Guma, hoping that she might find a French publisher, applied for a translation grant from the Albanian Ministry of Culture, an arm of the Albanian government, but was rejected. Undaunted, she is in the midst of her third novel, a humorous account of the life of a young writer.

She also writes columns for an online Albanian woman’s magazine and, until three years ago, wrote for a local print newspaper, but this relationship was terminated after she wrote an unflattering piece about Albania’s current prime minister, Edi Rama. “During communism, the government only promoted writers who promoted their demagogy,” she says. “During democracy, it’s the same system.” She explains that the current ministry of culture tends to favors writers it views as political allies.

She recalls that one of her childhood influences was Lost Illusions by Honore de Balzac, the Post-Napoleonic French realist who influenced Friedrich Engels and others. Most American and Western European writers were banned during the communist era of her childhood, but since the fall of the communists in 1992, literature from around the world is available. “I’m enchanted by Salinger’s style, and I’m heavily influenced by French and German authors,” she says. She mentions Stefan Zweig, the mid-20th century Austrian writer who killed himself during the Nazi occupation, and she’s effusive about John Fante, the American writer who influenced and was championed by Charles Bukowski. (There is a bar named for Bukowski across the street from E7E). She says she also admires the Albanian poet and story writer Millosh Gjergj Nikolla (penname Migjeni) and the poet Frederik Rreshpja, and she appreciates Ismail Kadare, the most famous of all Albanian writers. 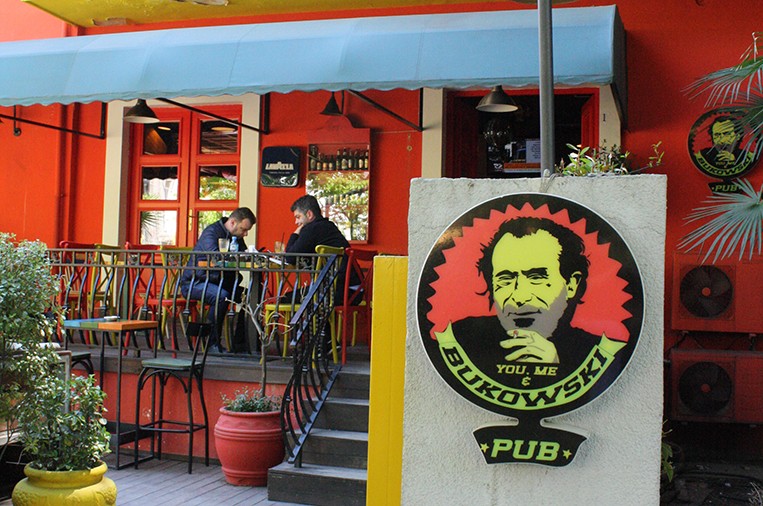 You, Me & Bukowski, a bar and restaurant in Tirana.

Under the communist regime, published writers and poets served as the mouthpiece for the state, and few were brave enough to experiment with the party line. One exception was Kadare, author of thirty-seven novels, seven story collections and a play. Like Mo Yan, the government-supported, Nobel-Prize-winning Chinese author, Kadare has a talent for writing philosophically complex novels while also adhering to the party line of his communist rulers. Kadare won the Man Booker International Prize the first year it was offered in 2005, and more than twenty of his works have been translated into English.

“During communism, only the writer of the ruling ideology was respected; the other was shot or sent to prison,” Guma says. “Kadare was the only exception.”

In a continuing series examining the lives of writers in the international writing community, contributing editor Stephen Morison Jr. spends time with three authors in Rome who share a common desire "to shake free from a past so impressive it's...

The Exiles: Report From Literary Syria
by Stephen Morison Jr. | The Literary Life 2.12.14

In a continuing series examining the state of literature abroad, poets Amjad Etry and Hala Mohammad and filmmaker Muhammad Bayazid discuss the challenges that writers and artists face amidst ongoing political turmoil in Syria.