In Search of David Foster Wallace

David Foster Wallace is a funny thinker, a library vaudevillian with an “amphetaminic eagerness” to please. Though best known for his two long, deeply complicated, and often funny novels, The Broom of the System (Penguin, 1987) and Infinite Jest (Little, Brown, 1996), Wallace is most popularly read as a writer of provocative short fiction, collected in three volumes—Girl With Curious Hair (W.W. Norton, 1989), Brief Interviews With Hideous Men (Little, Brown, 1999), and Oblivion (Little, Brown, 2004)—and as a profanely humorous essayist. Wallace’s second collection of essays, Consider the Lobster, published last month by Little, Brown, follows eight years after his first, A Supposedly Fun Thing I’ll Never Do Again, also published by Little, Brown, in 1997. 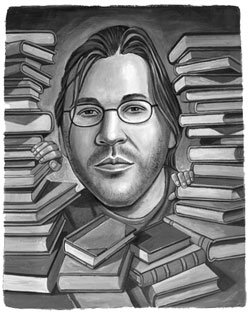 Everything I know about DFW (even his wanton use of acronyms in place of proper nouns) I know secondhand—through his books, a few printed interviews, reviews, and critical studies. It’s not that I haven’t tried to pose some questions directly to the writer himself, to ferret out a few insights from the man Sven Birkerts—in a review of Infinite Jest for the Atlantic Monthly in 1996—called “a wild-card savant.” No, my search to find the real DFW has been impeded by agent and publicist alike: I’ve been stonewalled. Whether he is “publicity shy,” as his publicist contends, or whether he’s weaving a web of literary mystique about himself, I do not know. And, it seems more and more likely, I never will.

I do know that DFW lives up a canyon road in the easternmost foothills of Los Angeles. I know the road that leads to him often washes out when rains push over the San Gabriel Mountains. I know he lives among coyotes and suburban black bears, “trash bears” we call them—bears that must be careful, lest they end up with crimped collars around their necks, performing in a traveling circus. I know all this because I live where he lives—in Claremont, California.

My odyssey to interview DFW began with a series of telephones calls—first, to Pomona College, where he is Disney Professor of Creative Writing (an endowed chair funded by Walt Disney’s nephew, Roy). From Pomona College I was sent to DFW’s literary agency in San Francisco, Frederick Hill/Bonnie Nadell. San Francisco sent me back to Los Angeles, to Bonnie Nadell herself, DFW’s agent and the person to whom Consider the Lobster is dedicated.

While Bonnie Nadell was certainly nice, she was noncommittal. She was interested in taking down my phone numbers and e-mail addresses and “getting back to me.” She was interested in “talking things over with David,” and seeing if, together, they felt the interview was worth it. When I didn’t hear back from her, I contacted DFW’s publicist at Little, Brown in New York, but she offered little help. Each time I called her, she was seemingly in a hurry to do something else, and answered each of my questions before I finished asking:

Would it be possible to interview David Foster Wallace for Poets & Writers Magazine? “I spoke with David last night, and he’s not doing interviews for the book.” Could I send him a few questions by e-mail to respond to? “David doesn’t do e-mail.” Are you saying he’s not going to do any interviews at all for Consider the Lobster? “I may talk him into one or two major things.” Can I at least get an advance reading copy of the new book? “They’re all gone. They went like hotcakes.”

In a last-ditch, Woodward-and-Bernstein effort, I stalked DFW at work. I delivered a plea for an interview, in writing, to his office in Crookshank Hall (a name and place straight out of Harry Potter) at Pomona College. Silence.

So, it’s really true. The road that leads to DFW washes out.

Luckily, there is a precedent for this kind of journalistic profile sans interview, and it comes from the work of DFW himself. In the same way he never spoke directly with David Lynch, but wrote about him (in the essay “David Lynch Keeps His Head,” in A Supposedly Fun Thing I’ll Never Do Again) and never actually talked to Michael Murphy, John McCain’s senior campaign strategist (for his essay on the senator’s 2000 bid for the GOP nomination for president, in Consider the Lobster), I never actually spoke with DFW.

I’m forced back to his work, the words—and there are plenty of them. I’m forced back to the clues you can buy at the bookstore and read on the Internet and in the papers. And nearly everyone has an opinion, something to say, about DFW. Everyone, it turns out, except David Foster Wallace.