In Search of David Foster Wallace

Born in Ithaca, New York, in 1962, DFW was raised in Illinois, in the middle of Tornado Alley, by two college professors interested in books and tennis—his father taught philosophy and his mother taught English. Clearly, DFW continues to work his family’s metaphorical farm; he puzzles and writes, writes and puzzles. It’s a plausible petri dish, certainly, for the writer he is still becoming. But who is DFW, really? What makes him tick? 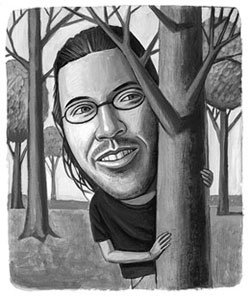 Again, my guesswork turns forensic, archeological. I want to know things—I want the silence cracked. I have my own set of Questions for the Absent Author (QAA). Do you believe in God? Do you believe you “put the novel back on the map,” as Charlie Rose said you did, when he interviewed you back in 1997? (Charlie Rose must fall neatly into his publicist’s classification of “major things.”) Do you love the primary material of your work—the people, places, things—more than the work itself? Is Scientology the answer to any question at all? What pain lies behind your panoply of fun?

Fortunately, trace elements of DFW’s biography are threaded throughout his work. Just like the weird Beadsman clan in The Broom of the System, published when he was just twenty-five years old, DFW followed his father to Amherst College. He graduated from Amherst in 1986 with a degree in philosophy, while focusing his studies on mathematical logic and semantics (an interest that would later develop into a book about, of all things, infinity—Everything and More was published by Atlas Books in 2003). DFW received his MFA from the University of Arizona in 1987, and for most of the 1990s, he taught at Illinois State University before filling the Disney Chair at Pomona College in 2002. QAA: Why did you choose prose over proofs?

DFW’s academic background might explain his love of pulling together arguments using footnotes—nearly all of his books, whether fiction or nonfiction, include detailed footnotes—in discussing hegemonies, in opining on his intellectual cravings (what he calls his “jones”), in unpacking “complicated ironies” in front of readers in hopes of reaching a conclusion, which, it turns out, he rarely does. If anything, DFW enjoys the journey, enjoys allowing the reader, in nearly every case, to come to her own conclusions. His work is always difficult, though, layered with complicated sentences and underused words, and, depending on your own “jones,” worth the trouble—or not. Reading DFW isn’t for the weak. QAA: Why the compositional witchcraft? Do you think the form of your prose helps or hinders the content? Do you ever feel like simply telling your readers what and how to think? Should that ever be the point of writing in the first place?

While DFW’s theoretical thinking on fictions, on metafictions, on the modern and postmodern is thoroughly tangled and troubling—and at certain low biorhythmic times during the day, beyond my powers—his actual fiction and his actual essays are not, really. It can be said that DFW’s writing rarely strays from a singular expository axiom: Isn’t it interesting what I find interesting? Even Michiko Kakutani, the book critic for the New York Times, has agreed. His essays, in particular, are stuffed full of the offbeat and underexamined. In Consider the Lobster—which I was finally able to procure from my editor at Poets & Writers Magazine—DFW stretches to cover subjects as diverse as the annual Adult Video News (AVN) Awards, McCain’s presidential bid, the poor quality of Tracy Austin’s tennis memoir, ruminations on Kafka and Dostoevsky, and the morally quarrelsome method of preparing lobsters. QAA: Have you ever been in a fistfight? Do you think Ben Marcus was a big meanie in his October 2005 Harper’s essay, “Why Experimental Fiction Threatens to Destroy Publishing, Jonathan Franzen, and Life As We Know It,” or do you agree with him that “literary language can also make a more abstract but no less vital entertainment”? Does it bother you that you weren’t mentioned in that article—even as a footnote?

Consider the Lobster opens with “Big Red Son,” a long travelogue, first published in Premiere magazine in 1998, devoted to the AVN Awards in Las Vegas. The essay begins with a soliloquy on self-castration—with talk of “kitchen tools” and “wire cutters” and the male odyssey to find the “perfect release.” What follows, though, proves that his hyperbole has little point—he was, in fact, only joking. “Big Red Son” actually ends up tracing DFW’s rather routine journalistic junket through an adult video industry, which was, unfortunately, on its best behavior. His convention weekend coverage reveals no wild sex in stairwells, no drug vials casually left behind at a booth in the casino’s all-you-can-eat buffet—just bored starlets in hotel rooms watching reruns of Seinfeld and the like.

“Big Red Son,” like several other essays in Consider the Lobster, and some in A Supposedly Fun Thing I’ll Never Do Again, wasn’t DFW’s idea in the first place. He was simply contacted, or “contracted,” by different magazines and asked to go somewhere, look around, and write about it. And so he does. QAA: Has there ever been a topic that you refused to write about? Have you ever considered covering the Rubik’s Cube World Championships in Orlando?

All of the pieces in the new essay collection are saturated with footnotes, and in DFW’s books, this is how readers learn more than they really need to know. For example, there were nearly eight thousand adult videos released in 1997; the AVN Awards cover 106 presentation categories; thirty thousand sex scenes were committed to tape over twelve months, and so on. Readers learn, too, that “The average professional lifespan of a female performer is two years. Males, though lower paid, tend to last much longer in the business—sometimes decades.” The details pile up. QAA: What did a minimalist ever do to you? Do you believe Joan Didion was right, that “we tell ourselves stories in order to live”?

While DFW is himself learned, he is keenly interested in making his readers so, too. Whether we are following him around a lobster festival, thinking about whether the crustaceans “feel pain” when boiled alive, or whether he’s busy mulling over Kafka’s kind of funny—DFW wants something from us. He wants a conceit, a confession that none of us knows as much as we thought we did about anything—even him. Every essay, complete with footnotes, is a quest for knowledge and a giggle. He goes wild for an academic yarn.