Walton Muyumba’s astute, engaging literary and cultural criticism can be found in a wide variety of influential media outlets, from magazines like the Atlantic, the New Republic, the Believer, and the Oxford American to newspapers like the New York Times Book Review, the Los Angeles Times, the Boston Globe, and the Chicago Tribune to websites like the Los Angeles Review of Books and the Barnes & Noble Reviews. Over the years he has reviewed an impressive array of books by many of today’s preeminent writers, including fiction by Colson Whitehead, Toni Morrison, Yaa Gyasi, Ottessa Moshfegh, Percival Everett, Don DeLillo, Darryl Pinckney; poetry by Terrance Hayes; and nonfiction by Zadie Smith, Hanif Abdurraqib, Rowan Ricardo Phillips, Laila Lalami, Carol Anderson, Ta-Nehisi Coates, and Edward Ball, among others. To get a taste of his brilliant work in cultural criticism, check out his reflection on Miles Davis’s “Blues for Pablo” in ASAP Journal and his ingenious Believer essay, “A Denzel Washington Filmography of Character, Death, and Mercy.” 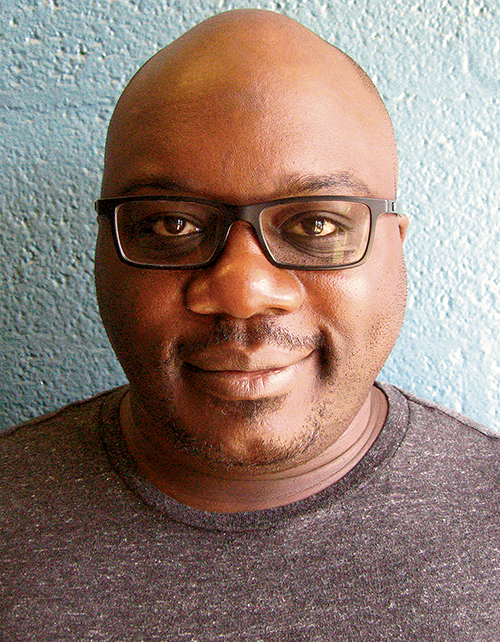 Muyumba is the author of The Shadow and the Act: Black Intellectual Practice, Jazz Improvisation, and Philosophical Pragmatism (University of Chicago Press, 2009), a work that examines the influence of jazz improvisation and pragmatist philosophy on the literary art of Ralph Ellison, James Baldwin, and Amiri Baraka. Currently he’s finishing a book about contemporary American literary art and popular music and is working on projects about John Edgar Wideman’s literary works and about ethnic American art in the age of terrorism.

How did you get your start as a literary critic?
Even before I knew what criticism was, I was fascinated with it. As a kid I’d stay up late on Saturday nights to watch the syndicated movie review show Siskel and Ebert, and I learned about criticism from reading their reviews in the Chicago Tribune and the Chicago Sun-Times. During my undergraduate and graduate studies, I became a critical journalism junkie, reading everything from the New York Times Book Review and New York Review of Books to Vibe and the Source to Oxford American and the Village Voice and Voice Literary Supplement. Reading and rereading Scott Poulson-Bryant, Greg Tate, Stanley Crouch, Gary Giddins, Joe Wood, Joan Morgan, Elizabeth Hardwick, Joan Didion, Darryl Pinckney, and many others trained me to think critically.

My first reviews appeared while I was writing my dissertation at Indiana. In 1998, I reviewed Toni Morrison’s Paradise for the university newspaper, the Indiana Daily Student. The next year I wrote a few movie reviews for Black Camera, the journal attached to Indiana University’s Black Film Center/Archive. In February 2000, I reviewed a pair of poetry anthologies for the Chicago Tribune.

You served on the board of the National Book Critics Circle (NBCC). What committees were you a part of?
I was a board member for two terms, from 2014 to 2020. I served on the fiction, nonfiction, criticism, and poetry committees. I also moderated a couple of NBCC-sponsored public conversations about criticism and representation, e.g., gender, immigrant writers. Book criticism is better when book pages and critical outlets present writers who mirror the demographic richness of American life.

What’s your reading process like? How many books are you typically reading at any given time?
While reading paper or PDF advance reading copies, I underline strong and weak sentences, add comments in the margins, and mark passages for rereading. I build a trail of reactions throughout the pages that make up a kind of predraft. The trail also encourages rereading. So crafting a review means moving through a book several times over. Sometimes I’ll transcribe key quotations into a notebook, trying to catch the rhythms and revelations of the writer’s prose. On some level I’m always working to raise my own writing to the level of the art under consideration. I like reading several books at once. I often have four or five books going concurrently, especially when I’m not teaching. When my university responsibilities are particularly demanding, I might be able to manage two or three books at a time. Taking on multiple works simultaneously gives me a sense of the many different trends circulating in the book culture.

What would you like writers to know about your role as a literary critic?
I understand how difficult it is to write artfully. I also understand how difficult it is to advance a book project from conception to completion. So, in the midst of a review, I think it’s important to demonstrate respect for the artist’s labor, that the book has been read seriously, even when the final product fails their intentions. In the main I’m interested in dealing with how books work aesthetically, emotionally, and intellectually. The books that often fascinate me most are the ones attempting something innovative, formally or generically, while also attempting unique representations of contemporary life and delivering wisdom about human emotion. Sometimes those books draw my attention because they’re overstuffed with genius but don’t achieve their intentions. Sometimes masterful writers can calf-rope that kind of messiness into mesmerizing art—Paul Beatty’s The Sellout, for example. Hopefully my reviews present entryways into either kind of work and into already ongoing conversations among other readers and writers about art, politics, ideas, and experience.

Is there ever anything from the publishing side—notable blurbs, a sizable advance, your relationship with an editor or publicist—that raises your interest in a particular author or book?
No, I’m not motivated by blurbs or advances. I do pay attention to the ARCs mailed to me and to publicist e-mails.

Are you able to review many books outside of the Big Four publishers?
Yes, editors have accepted my pitches to review books from Two Dollar Radio, Graywolf, and Beacon. I admire the books coming from independent houses like Deep Vellum, Restless Books, Open Letter Books, Belt Publishing, Wave Books, Coffee House, Hub City, Milkweed Editions, New Directions, and New York Review Books. And after the great success that Deesha Philyaw had publishing The Secret Lives of Church Ladies with West Virginia University Press, we all ought to give more attention and love to university presses. Some of my favorites are Indiana, Chicago, Northwestern, California, Duke, Georgia, Harvard, Texas, and Yale.

How conscientious are you about diversity—gender, race, sexual orientation, etc.—when choosing which books to review?
I think that diversity matters in criticism. Though I’ve written most frequently about African American artists, I want to write about all kinds of writers, subjects, and experiences.

What’s your opinion of the value of negative reviews?
Negative responses can be important. Writers must take risks to create potent, truth-telling art. However, when a writer creates misogynist or racist or any other form of dehumanizing characterizations, or his book unironically amplifies imperialist/genocidal worldviews, then critics ought to put intense pressure on that work. Sometimes that kind of pressure produces stunning, invaluable criticism. Two examples from the London Review of Books live in my memory: Pankaj Mishra’s “Watch This Man,” an incendiary rebuke of Niall Ferguson’s Civilization: The West and the Rest (March 3, 2011), and Patricia Lockwood’s “Malfunctioning Sex Robot,” a postmortem on John Updike (October 10, 2019). Lockwood and Mishra both use humor, irony, close analysis, and masterful linguistic control to build essays that maintain their power well beyond publication date. In other words they turned stinging rebuke into artworks. Sometimes keeping real can go wrong, though: See Stanley Crouch’s negative review of Morrison’s Beloved. There is another way: When describing a book’s problems or an author’s particular weaknesses, I work hard not to either belittle the art or insult the artist. I think it’s better—even when delivering bad news—to be generous rather than punitive.

Have you ever changed your mind about a book that you praised or panned earlier?
No. However, speaking of generosity, I wish that I’d been more forceful in praising Yaa Gyasi’s abundant powers in my review of Homegoing. Still, my take on that novel’s problems hasn’t changed. In any case, her second novel, Transcendent Kingdom, proves that Gyasi has become a stronger novelist. And that has everything to do with her commitment to the art and likely nothing to do with my critique of her debut.

Has a work of criticism ever changed your opinion of a writer’s work?Yes, several times. Most recently, while reading Philip Roth: The Biography, Laura Marsh and Parul Sehgal posted reviews that adjusted my appraisal and changed how I think about that biographer’s other books.

Has social media been helpful at all in your role as a critic?
I’m not sure. I’m on Twitter and Instagram, following magazines like the New York Review of Books, Bookforum, the Nation, the New Republic, the London Review of Books, Times Literary Supplement, The Point, n+1, and others to stay in the critical loop. I also follow critics and writers and some houses to catch publication announcements. I post links to my own work on both platforms. But it’s likely that I need to become a more sophisticated user of both.

If you could change one thing about the book-reviewing process or the world of book criticism, what would it be?
Maybe book criticism would be radically invigorated and renewed with a more vital and diverse array of writers—sexual orientation, race, class, gender—from different regions and different kinds of educational backgrounds publishing essays and reviews in the key magazines and journals.

Where do you see the future of literary coverage in ten years?
Hopefully in a decade newspaper and magazine editors and designers will have figured out how to use the internet to produce vibrant, profitable online book sections that resist the industry’s economic fluctuations. That future likely also includes more virtual interaction between critics and audiences. And maybe we will all be dabbling in the kinds of hilarious videos that the Washington Post’s Ron Charles has made over the years.

What books that you aren’t reviewing are you most looking forward to reading this year?
There are so many. I love reading and don’t sleep enough:

Somebody Else Sold the World (Penguin) by Adrian Matejka

A Grave Is Given Supper (Deep Vellum) by Mike Soto

Seek You: A Journey Through American Loneliness (Pantheon) by Kristin Radke

In Memory of Memory (New Directions) by Maria Stepanova, translated by Sasha Dugdale

How to Wrestle a Girl (MCD x FSG) by Venita Blackburn

Why Solange Matters (University of Texas Press) by Stephanie Phillips

Everybody: A Book About Freedom (W. W. Norton) by Olivia Laing

Our Endless and Proper Work: Starting (and Sticking to) Your Writing Practice (Belt Publishing) by Ron Hogan