The National Endowment for the Arts (NEA) and the Poetry Foundation recently completed the pilot phase of a new program designed to raise the profile of poetry in high schools. National Poetry Recitation Contests were held in Washington, D.C., and Chicago, providing students the chance to cultivate an appreciation for poetry while honing their public speaking and memorization skills. 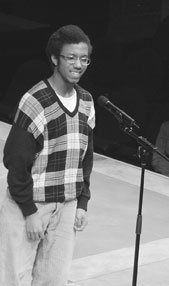 “The idea of the Poetry Recitation Contest was to ask students to take ownership of their literary heritage by taking a poem, making it theirs by memorizing it, and then delivering it to others,” said Cliff Becker, former director of the NEA’s literature program, in an interview before his death on May 17.

More than four thousand students at ten Washington-area schools, and thousands more at approximately forty schools in Chicago, participated in the program. The events featured several rounds of competition, in which students recited poems and were judged on stage presence, inflection, accuracy, and how well they appeared to understand the meaning of the poem. The competition culminated in April as regional finals were held in the two cities. Devin Kenny, a senior at Walter Payton High School, won the Chicago competition with his recitation of Gertrude Stein’s “Susie Asado.” Stephanie Oparaugo, a senior at Banneker High School, won the contest in Washington by reciting William Butler Yeats’s “The Second Coming.” Both students received $1,000, and their respective schools received $2,000 each, for the purchase of poetry books.

As part of the program, each student at the participating schools received a copy of two poetry anthologies—101 Great American Poems and 100 Best-Loved Poems, both published in the Dover Thrift Editions series—and Performing Poetry, an audio guide to recitation. The CD includes recordings of Dana Gioia, chairman of the NEA, speaking about “the power of poetry,” former Friends actor David Schwimmer reading Lewis Carroll’s “Jabberwocky,” and Alyssa Milano, the star of the syndicated series Charmed, reciting “I think I should have loved you presently,” by Edna St. Vincent Millay. Poetry recitation guidebooks were also provided to teachers at participating schools.

The program was created partly in response to the Reading at Risk study released by the NEA last July. In what Gioia called a “bleak assessment of the decline of reading’s role in the nation’s culture,” the study found that the steepest drop in literary reading over the past twenty years has occurred in the youngest age groups.

Although it is still being evaluated, Becker considered the National Poetry Recitation Contests a success, and said the NEA hopes to place similar programs in each of the fifty state capitals by early 2006. To make that happen, the NEA would most likely work with state arts agencies to fund the program. “It’s a way for us to take the program national but not overwhelm ourselves,” he said. “It’s controlled growth.”

While both organizations agree that the program will take time and money to develop, the goal is for every student in the country to be aware of the pleasures of poetry recitation.

If the enthusiasm of the students who participated in the pilot phase of the National Poetry Recitation Contests is any indication, the organizations may meet those ambitious goals sooner rather than later. “Some of these kids were really dramatic in their presentations,” Becker said. “There’s been a benefit from the slam and performance poetry movement.” Young agrees and adds that poetry recitation seems to come naturally to young people who have been raised in an age of poetry slams and reality TV. “Maybe it’s the American Idol culture or something,” he says, “but these kids seemed very comfortable up there.”

Kevin Canfield is a journalist in New York City.

NEA Responds to "Reading at Risk"
by Kevin Canfield | News and Trends 3.1.06

In response to its 2004 report "Reading at Risk," which found that significantly fewer people read serious literature now than in years past, the National Endowment for the Arts recently launched an ambitious program designed to reverse the...

The National Endowment for the Arts releases To Read or Not to Read—a follow-up to the nonprofit's 2004 report, Reading at Risk—which further expounds on America's declining reading habits.

The Law of Diminishing Readership
by Joseph Bednarik | News and Trends 5.1.06

As marketing director of Copper Canyon Press, the thirty-four-year-old independent publisher of poetry in Port Townsend, Washington, I am required to read a lot. While most of the titles on my reading list are poetry collections, I recently read...

The Poetic Appraisal
by Sarah Davis | News and Trends 7.1.06

Poetry in America, the 2006 report released by the Poetry Foundation, has spurred efforts to revitalize an interest in poetry among the general population, and in doing so, has also sparked a debate among those in the literary community...