On May 16, Meera Dasgupta found out she had been named the next National Youth Poet Laureate in a way very emblematic of our times—via a Facebook Live event. Dasgupta, who has been New York City’s youth poet laureate since last autumn, was selected for the national role from a group of youth poets laureate representing more than forty states and fifty cities. The one-year position is part of a larger program run by the nonprofit Urban Word that celebrates teen poets who display leadership, artistic excellence, and a drive for civic and social engagement. As National Youth Poet Laureate, Dasgupta will give readings—some in person, some perhaps virtually—across the United States. 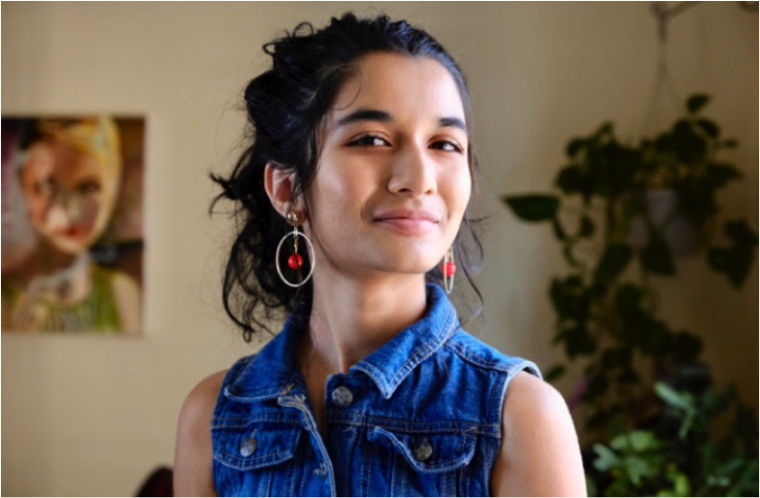 When I spoke with Dasgupta, mere hours after the announcement, via Zoom at home in New York City, the sixteen-year-old Stuyvesant High School junior was flush with excitement and already knee-deep in planning how to best use her role and new platform. Dasgupta is passionate about women’s political empowerment and climate justice—she participated in the youth arts program Climate Speaks run by the Climate Museum—and has been invited to perform at Carnegie Hall, the Teen Vogue Summit, and elsewhere. As she steps up to her new mic while juggling a full course load of classes, Dasgupta talked about how she came to poetry and how she stays creative in a very uncertain world.

How did you first come to writing poetry?
When I was younger I would write a lot. Whenever I got an assignment I would write fifteen pages just because. Also, I started performing in chorus and playing the guitar. I started writing song lyrics, and I think that’s where my poetic journey really began. The songs I wrote were basically short poems with music, and even though I look back at them and sometimes cringe, I know that’s where I got my start—so I’m very grateful for that.

You’ve done so many things already: You’ve been involved with Climate Speaks, you’re managing a full course load for high school, and you’re now the National Youth Poet Laureate. How did you know poetry was going to be your thing?
Over the past few years I’ve been very drawn to activism and advocacy, and I started writing poetry as an intersection between the two forms. At Stuy [Stuyvesant High School] I took a summer program in leadership and joined the Youth Leadership Council and just drove right in. We had a summit for one hundred young girls across the city for empowerment, and that was amazing. It was one of the first times I read poetry to an audience. There was a girl from the audience who heard me perform—it was sort of a showcase in order to garner attention for gender equality and gender equity—and she asked if she could read her poetry because she had been inspired and felt it was a safe space. She told me how she was part of the foster care system, how the summit had really helped her, and that she wanted to share her own poetry. I think that was a point where I realized: I want to continue doing this.

Civic engagement is such a key part of the role of National Youth Poet Laureate. What will you focus on?
Women’s empowerment and bringing intersectional feminist voices to politics is very important to me personally. This semester I’ve been taking a women and gender studies course at Hunter College. Growing up, I didn’t have a lot of women who looked like me to look up to, or maybe there weren’t enough for me to find, and I think that’s one of the reasons I really didn’t think I personally could get into politics. I think it’s so important to uplift these voices, especially today.

I am also passionate about climate justice, and last year I participated in Climate Speaks, a youth arts program about the climate crisis. I had never really heard of climate poetry, and I didn’t really see any poems on climate justice. It felt like a new genre of poetry. Intersecting art with activism is very important because sometimes facts aren’t enough to change people’s minds, and sometimes bringing your own emotions and being vulnerable on the page can also help show people that civic engagement is important, and that your voice is important.

So I really want to focus on these sectors of civic engagement, but also see how I can bring other people into the social justice fold because I have a large mic right now, which is an honor—I really didn’t expect it. I think it’s important to pass the mic and allow this influence to also bring other people’s voices up alongside my own.

In this age of social distancing and Zoom, how do you see the role playing out? How do you hope to connect with people?
I feel like Zoom has been a really big help. The internet is a very important tool for me to reach out, but I know that comes from the privilege of being self-quarantined with access to the internet. It’s also important to reach people who don’t have computers or internet access or time to be online. I know so many people are worried about unemployment or their jobs and their families, and I think that’s important to prioritize during this time. We are in a crisis, and it’s important to bring that into our spaces, even artistically.

Do you find it difficult to be creative in this time of heightened stress from constantly being online? And do you have advice, especially for other young writers, on how to be creative during this time?
I think you have to take it a day at a time because some days you really don’t feel like getting up and going on your computer and writing. Sometimes I go to sleep very late and then I have homework and projects and essays and I’m just like, I have to get this done before anything else, I have to prioritize my schoolwork because education is very important to me. Prioritizing yourself is first and foremost. No matter what, always put yourself first. Self-care is very important during this time. But sometimes I feel like writing can also be a way to alleviate stress and find time to be open with the situation and your emotions. So the advice I have for other young writers is: If you want to find a way to express yourself that’s constructive, if you ever feel stressed or any other negative emotion, writing can be a way of finding yourself within this space. Even though you’ve been in this space for so long during quarantine, or even if you feel like you’re stuck in these barriers and you can’t go outside and you don’t know what to do, writing can allow you to put your emotions on the page.

So poetry is a form of self-care?
Yes. I know a lot of people are talking about quarantine and uplifting one another through their words during this time as well. And I know that for many poets and artists, this time has been difficult because people have had to cancel so many tours and different things that would have brought them work during the summer and through the fall. Especially within the artist community, now is the time to bring one another’s voices up to the stage and support one another as much as you can. So writing is not only a form of self-care, but also a way in which we can support one another.

Are you reading anything right now—for fun or for school—that’s particularly inspiring you?
I’ve gotten particularly obsessed with Webcomics. I never expected it, but I’ve just gotten very engrossed in that medium—seeing images as well as words—because right now the only thing I’m seeing are these four walls [of my bedroom] and my living room. In school I’m reading When the Emperor Was Divine, which discusses Japanese internment. In my AP government class we’ve talked about U.S. history and the constitution and politics, but we have never really touched on that subject—what it meant in World War II for all these issues to come up, and [what it means now] during coronavirus, with the [rise in] racism toward Asian Americans, and other minority groups who are also very disproportionately affected by this crisis as well. And to see that, not necessarily mirrored—I know the situation is not the same—but just to see similar themes in general has been very eye-opening.

Madeline Weinfield lives and works in New York City. Her writing on culture and travel has appeared in a variety of outlets including the Washington Post, Lonely Planet, and Here. Her website is madelineweinfield.com.