Lawrence Ferlinghetti—born in Yonkers, New York, in 1919 and raised in France—spent three years at Mount Herman Prep School in Massachusetts. After undergraduate study at the University of North Carolina, he and two friends rented a hundred-yard-long island in Casco Bay, Maine, for thirty-five dollars a month. When World War II broke out, Ferlinghetti served as a ship’s commander in the U.S. Navy. 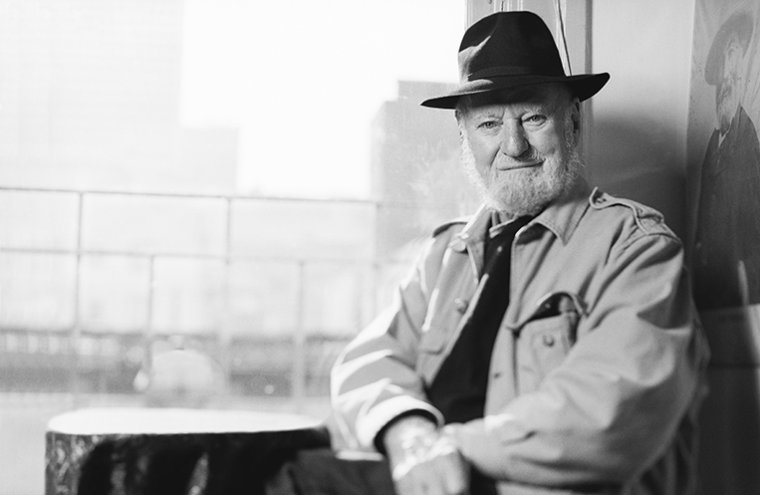 After receiving a master’s degree at Columbia University in 1947 and a doctorate from the Sorbonne in Paris in 1950, he moved to San Francisco, where he taught French, painted, and was an art critic. In 1953 Ferlinghetti and Peter Martin founded City Lights Bookstore, the first exclusively paperback shop in America. Two years later, they launched the independent press City Lights Books, which became instrumental in publishing many voices of the Beat movement. One of the first books they printed was Allen Ginsberg’s Howl, for which Ferlinghetti was arrested, and later released, on charges of obscenity.

Ferlinghetti is the author of more than thirty books. One of his first, the international best-seller A Coney Island of the Mind, has been translated into nine languages. His other poetry collections include These Are My Rivers: New and Selected Poems, 1955–1993 (1993), A Far Rockaway of the Heart (1997), How to Paint Sunlight (2001), and the book-length poem Americus, Book I (2004), all released by New Directions. He has also published novels, experimental plays, collections of drawings, and translations.

Last year I went to hear Ferlinghetti read at an event sponsored by the New England Poetry Club in Cambridge, Massachusetts. The funky old Harvard auditorium was crammed with gray-haired flower children, Vietnam vets, and high school and college students. By the time club president Diana Der-Hovanessian introduced him, scores of people had been turned away at the door. When the tall, white-bearded poet, wearing a bright blue shirt, leaned over the podium, fans exploded into applause, shouted favorite poetry titles, and cheered as he began to read.

Afterward, I squeezed into the signing line with a 1980s New Directions Annual that began with Ferlinghetti’s poem “Modern Poetry Is Prose” and included a poem from my first collection. When I made it to the front, he looked up with alert blue eyes. I was telling him about meeting Ezra Pound in Spoleto, Italy, when a group of teenagers burst on the scene, interrupting us. To these up-and-coming poets and writers, Ferlinghetti was Mr. Cool.

We reconnected last fall through a number of letters and phone calls.

At the poetry reading you said you are labeled a Beat but that you really are a Bohemian. What is your definition of a Bohemian?
That’s what they called nonconformists and people who don’t lead a nine-to-five life. I was the last of the Bohemian generation when I arrived from Paris in San Francisco. I was getting a doctorate at the Sorbonne in Paris on the GI Bill. So I arrived in San Francisco four years before Allen Ginsberg and the Beats did. I was still wearing my French beret.

By any chance did you meet the French writer-poet-singer Boris Vian in Paris? His broad interests—poetry, fiction, plays, criticism, and film scripts, which took on social issues—remind me of you. Around the time you were arrested for publishing Allen Ginsberg’s Howl, Vian was hauled into court for his song “Le déserteur” protesting the French Algerian war
No, I never met him. But I knew a French poet, Claude Pelieu. He knew Vian and he was the first translator of Ginsberg, he and his expatriate American partner Mary Beach—not related to Sylvia Beach who started the Shakespeare & Company bookstore in Paris. Claude Pelieu was an ex-junkie so he had a vocabulary just right for Ginsberg. Later they moved to San Francisco and were good friends.

I was fascinated by your impressions of Cuba you talked about at the reading. Weren’t you there during the Revolution? It must have been quite—what’s the word?—explosive when Castro took over.
Yes, they were experiencing revolutionary euphoria. Some of my mother’s family had migrated from Portugal to the Virgin Islands—the route of the Sephardic Jews to the New World. So when I was coming back from St. Thomas in 1960, I stopped in Cuba, which was perfectly legal at the time. There I ran into some young poets, and it turned out they worked for Lunes de Revolución, the Monday literary supplement of the daily newspaper. They took me to a cafeteria where they said Castro often ate. Sure enough, in the middle of the meal, this tall guy smoking a cigar and wearing combat fatigues comes out of the kitchen, and I said to the young Cuban poets, “Isn’t that Fidel? Will you introduce me?” And they said, “Well, we don’t know him.”

In this country you wouldn’t rush up to a senator, but I got up and walked over to him. At that time my Spanish was hardly existent. The only thing I could think of was, “Soy amigo de Allen Ginsberg.” Ginsberg was living at the Lenox Hotel in New York City, and Castro had seen him when he went to New York to get support for his economic programs. They turned Castro down and he turned to Russia.

So what did Castro say?
Well, he had this funny grin on his face. He shook my hand—he had a very limp handshake, which surprised me. And then he just turned and waved and went out to his open jeep by himself—no guards—and drove away. Everything was really open then.

The Cuban poets had arranged for me to see Pablo Neruda, who was there for the anniversary celebration. He was staying on the top floor in a big suite in the Havana Libre, which had been the Havana Hilton. And his wife, Gertrude, was there. She was French-speaking, which was good. Well, he spoke pretty good English, too. I spent about an hour with him, and he had these huge quarto-size notebooks spread out on a big table and was writing in them with a very large crayon because his eyesight wasn’t so hot. Neruda gave his reading in the National Assembly Building where General Batista’s senator henchmen had sat. And there were these beautiful velvet armchairs and huge balconies. The place was jammed with Fidelistas still in combat uniforms, with their feet up, smoking cigars. And the whole place was jumping with revolutionary fervor. It was really moving to see. The whole hall was pulsing. Neruda gave a very stirring poetry reading.

The big pads of paper Neruda used remind me of something I wanted to ask about your paintings. Your canvases are used for covers of some of your books. Do you ever make Kenneth Patchen–style drawings with your poems?
No. I have always avoided “illustrating” my poems. I’ve been drawing from a model for many years. Before I had anything published I was painting in Paris, and I had an opening last night in downtown San Francisco at the George Krevsky Gallery, a big show called Word Play. About thirty paintings—some of them on cardboard, which I did in Italy when a group there was doing Arte Povera [a movement in which artists use whatever materials are on hand]. I’ve been doing words on canvas—but they aren’t my poems.

The poetry book I’d like to talk about is Americus. It’s totally different from my former poetry, which you could say was conceived to be read aloud—crowd-pleasers. The reason I have such a young audience is that my original concept was that poetry should have a public surface that makes it available to everybody, so anyone can understand it without a literary education.

Your poetry is accessible, I think, because it’s lyrical. When I read it aloud it’s like a good song you can’t get out of your head.
That’s the case with A Coney Island of the Mind, and in fact, the central section is an oral message. But this book, Americus, is in the tradition of William Carlos Williams’s Paterson, Charles Olson’s Maximus Poems, and Ezra Pound’s Cantos. It’s not necessarily meant to be read aloud. It’s for reading on the page because practically every line has an allusion. In fact, the first line of the poem is “To summarize the past by theft and allusion”—which sort of sums up the technique of the whole book. It’s very much in the Pound tradition, even though I take off on Pound early in the book.

A satirical take on Pound?
Well, I have a whole section that is quite critical of Pound. No one has even reviewed it.

BACKSTORY: He’s got to be kidding—a poet whose book A Coney Island of the Mind has sold close to a million copies and he’s telling me he can’t get a review? But after scouring for reviews of Americus in a dozen college libraries and bookstores, I believe him and wonder what National Endowment for the Arts director Dana Gioia had in mind when in 2003 he assured state laureates from all over the country that the United States was enjoying a “poetry renaissance.” Here’s a national icon in his eighties who won the National Book Foundation’s first Literarian Award for his “outstanding service to the literary community,” and two years later you can’t find a copy of his latest book outside of major cities. The Book Review Digest (2004–06) doesn’t have a single entry for Americus.

At the Harvard reading I mentioned meeting Pound in Spoleto. I know you were there because of your poem “Pound at Spoleto.” Any particular reason for writing it in prose?
It was published that way in the old Saturday Review of Literature. When were you there?

In ’66. I believe you were invited to the first International Poetry Festival in ’65 when Pound read at the Caio Melisso theater? In your poem you say, “I went down and out into the sunlight, weeping.” I don’t know why, but I felt sad too—terribly sad.
I visited Mary Pound—Mary de Rachewiltz—at Brunnenburg last year in the farthest northeast corner of Italy, almost in Austria. She was the daughter of Pound’s other woman, Olga Rudge. He wrote a book called Indiscretions, and later Mary wrote one she called Discretions. Pound and Rudge farmed her out when she was a baby to a peasant family near the Austrian border. When Pound came and got her, she was maybe ten or twelve.