by
Staff
News and Trends
September/October 2017

With so many good books being published every month, some literary titles worth exploring can get lost in the stacks. Page One offers the first lines of a dozen recently released books, including Celeste Ng’s new novel Little Fires Everywhere and Frank Bidart’s Half-light: Collected Poems 1965–2016, for a glimpse into the worlds of these new and noteworthy titles. 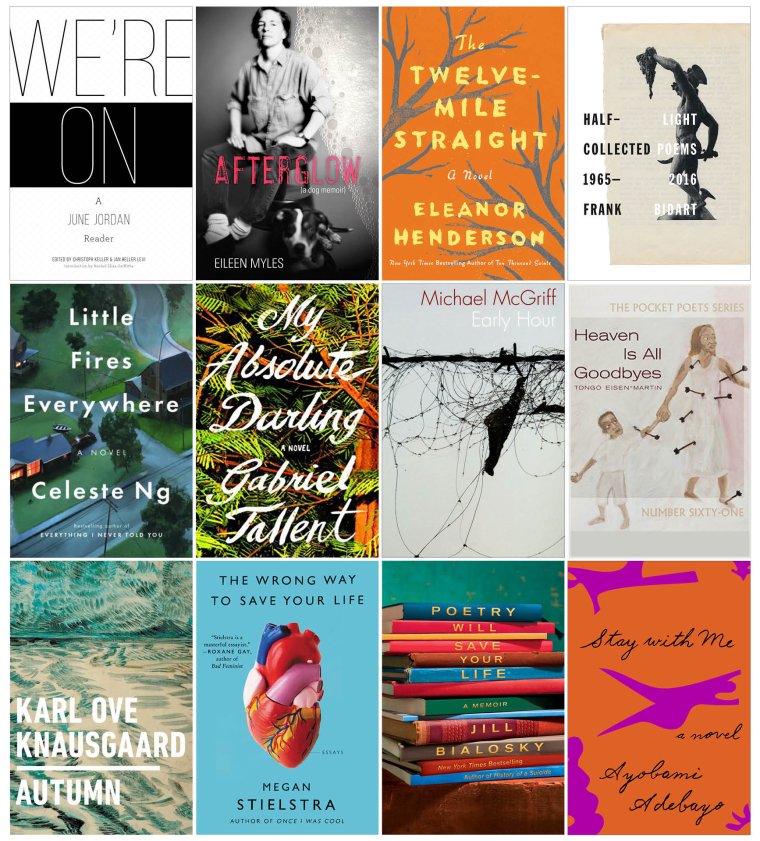 “Everyone in Shaker Heights was talking about it that summer: how Isabelle, the last of the Richardson children, had finally gone around the bend and burned the house down.” Little Fires Everywhere (Penguin Press, September 2017) by Celeste Ng. Second book, novel. Agent: Julie Barer. Editor: Virginia Smith Younce. Publicist: Juliana Kiyan.

“What I hope (when I hope) is that we’ll / see each other again,— // … and again reach the VEIN // in which we loved each other...” Half-light: Collected Poems 1965–2016 (Farrar, Straus and Giroux, August 2017) by Frank Bidart. Ninth book, poetry collection. Agent: None. Editor: Jonathan Galassi. Publicist: Steven Pfau.

“I must leave this city today and come to you.” Stay With Me (Knopf, August 2017) by Ayobami Adebayo. First book, novel. Agent: Kathy Robbins. Editor: Jennifer Jackson. Publicist: Katie Schoder.

“28 August. Now, as I write this, you know nothing about anything, about what awaits you, the kind of world you will be born into.” Autumn (Penguin Press, August 2017) by Karl Ove Knausgaard, translated from the Norwegian by Ingvild Burkey. Tenth of thirteen books, ninth novel. Agent: Andrew Wylie. Editor: Ann Godoff. Publicist: Gail Brussel.

“I am a child sitting in my wooden flip-top desk in my fourth grade classroom listening to Miss Hudson read Robert Frost’s poem ‘The Road Not Taken,’ a poem about two paths and a crossroad.” Poetry Will Save Your Life (Atria Books, August 2017) by Jill Bialosky. Ninth book, second memoir. Agent: Sarah Chalfant. Editor: Peter Borland. Publicist: Lisa Sciambra.

“A tour guide through your robbery / He also is // Cigarette saying, ‘look what I did about your silence.’” Heaven Is All Goodbyes (City Lights Publishers, September 2017) by Tongo Eisen-Martin. Second book, poetry collection. Agent: None. Editor: Elaine Katzenberger. Publicist: Chris Carosi.