The Joy of Collaboration: A Ten-Point I-Told-You-So Guide

One afternoon in March 2003, I received an unexpected phone call from writer Julianna Baggott. "I've got a crazy idea," she told me. "It's so crazy, I feel a little nervous even bringing it up." 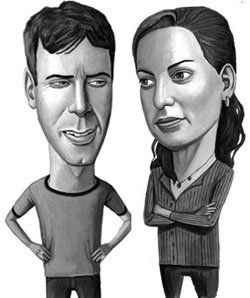 I didn't really know Julianna at that point. Or rather, I knew her as writers tend to know one another. I'd attended a reading of hers some months earlier; read a good deal of her poetry, including her collection This Country of Mothers (Southern Illinois University Press, 2001); and e-mailed her a few times to kvetch about the vagaries of putting a book into the world. Her second novel, The Miss America Family (Pocket Books) was released in 2002, the same year my first short story collection, My Life in Heavy Metal, was published by Grove Press. We were literary acquaintances with perhaps a minor case of kinship.

Julianna took a deep breath. "I think we should write a book together."

I had no idea what to say.

Which was fine, because she had the plot all worked out: A couple of rambunctious thirty-somethings meet at a wedding, get drunk, and proceed directly to an empty coatroom. Rather than have sex, though, they decide to write one another confessions of their romantic misdeeds. Her plan was to write the first chapter, then I would write the second chapter, or confession, and so on.

Julianna had decided to contact me because, as she so kindly put it, "You know how to write about screwed-up relationships, and you're not dead." She was quite aware of how unorthodox her proposal sounded. It was, she conceded, almost like initiating an extramarital affair. She was quick to add that her husband, writer David Scott, loved the idea.

To make a very long story very short, the finished novel, Which Brings Me to You, is being published this month. Both Julianna and I are ridiculously happy about it, of course, and we spend a lot of time these days pinching ourselves—though not, I should add, pinching each other. (A friendly reminder: Julianna is married.)

That said, the collaborative process was more than we had banked on. As in: a lot more. To anyone considering the same precarious arrangement, let me offer a few choice words of advice, or what I like to call my "Ten-Point I-Told-You-So Guide to the Art of Collaborative Writing."

It felt a lot like the beginning of a romantic relationship: hurried, enthralling, voracious, and fraught with the good danger of self-revelation. We had a first draft completed within two months.

I don't suppose I need to tell you what happened next.

2. You will argue. Our initial concerns (that's what we called them back then: concerns—how cute!) were about little things. A word here, a phrase there, a possible deadline for the next chapter. No big deal.

Next came the stylistic issues. My tone was confessional. I wrote long, frightfully earnest scenes. Julianna favored a more poetic mode; her sections were often daisy chains of vivid associations. We spent much of the first draft gently pressing these aesthetic differences on each other.

3. You will argue some more. By the second draft, we were no longer feeling so diplomatic. And neither were our characters. They began to accuse each other of being difficult. At a certain point, we dropped the proxies and went straight for the jugular. Julianna was tired of my sanctimonious judgment. I was tired of her glib evasions.

We couldn't even agree on how to communicate. She liked to talk on the phone. I preferred e-mail. To hear some of the spats we had, you would have sworn you were listening to the audio feed from Divorce Court.

Julianna: It's like you're torturing me!
Steve: Me? You're the one who dragged us into this.
Julianna: And don't think I don't regret it.
Steve: [Sound of muffled weeping] You don't mean that!

4. Don't fight the arguments. I'm not suggesting that either one of us enjoyed fighting. Actually, that's not true. I did enjoy it—but only when I got to shout.

My point is that our fights were a necessary result of the collaboration. They forced us to interrogate our own aesthetics, to confront our flaws. My language became less prosaic; Julianna slowed down her scenes.

The dustups also helped us get deeper into our characters. Both of them, after all, were confessing to considerable rage and hurt, most of it stemming from having made a total shambles of their romantic lives. We (the authors) had a seemingly endless supply of both rage and hurt. How convenient! And I'm pleased to report that we were scrapping right to the last words of the final page, pummeling each other with the various jabs and uppercuts of world-class narcissists. At one point Julianna unleashed a tirade that would be unprintable in this magazine. (I deserved it.)

But then, finally, a calm descended upon us: We had a manuscript.

5. A manuscript means diddly. I don't mean this, of course. It's a major accomplishment to finish any manuscript—particularly when your coauthor has threatened to put out a contract on your life—and no one can take that away from you. So, feel happy. Feel joyful. Drink many alcoholic beverages. I know I did.

But when I woke up the next morning, it occurred to me that, first of all, I probably shouldn't mix peach schnapps and grain alcohol—at least not in Jell-O form. Perhaps more distressing, I had to reckon with the fact that writing the book was only the first step in a long, treacherous process. We had to sell the thing.