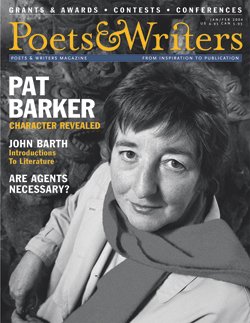 Pat Barker is best known for The Regeneration Trilogy, which is set during World War I and has been called "some of the most powerful antiwar literature in modern English fiction." In the just-published Double Vision, the Booker Prize–winning novelist explores the aftermath of more contemporary wars—Bosnia, Afghanistan—and the resilience of some of war's unlikeliest victims.

by Carolyn T. Hughes
Print Only

Trailblazing author Pat Barker discusses her writing process, how she creates characters, and the darker themes in her novels.

Keeping the Past Aflame: A Profile of Shirley Hazzard

by Lucy Gordan
Print Only

Fifty years ago Shirley Hazzard's parents ended her love affair with a young army officer, a "walking anthology of poetry," by moving their family from Nanking to New Zealand. The National Book Award–winning novelist famously went on to marry the...

Get on the Bus: Bookstore Tourism

Six months ago Larry Portzline, a professor of writing and literature at Harrisburg Community College in Pennsylvania, started a grassroots movement called Bookstore Tourism—a series of bus trips to urban centers where reader-tourists can patronize independent bookstores. At the end of March, a group of readers from the Harrisburg area will travel approximately 200 miles to the 10th annual Virginia Festival of the Book, where they will participate in festival events (readings, book signings, seminars, and so on) and visit the many independent bookstores that are in Charlottesville, Virginia, including New Dominion Bookshop, the Book Cellar, and Blue Whale Books.

Turning the Page, Saving a Tree

At some point during her two-year stint atop an ancient 200-foot redwood tree in Humboldt County, California—an effort to to save the old-growth forest—environmental activist and writer Julia Butterfly Hill was approached by HarperSanFrancisco for the rights to publish her memoir, Legacy of Luna. Hill accepted the offer, with one stipulation: Her book had to be printed on 100 percent postconsumer recycled paper manufactured without the use of chlorine bleach.

In 1998, Dan Bowers, an engineering consultant in Red Lion, Pennsylvania, was on a mission. His son-in-law, Chief Master Sergeant Frederick Honeywell, was serving at an Air Force base in Kuwait that had no recreational facilities and no library—and indeed, no books. When Honeywell's wife, Chris, told her father about the problem, Bowers sent some of his own books, as well as donations from others, overseas. It was the first deployment of what eventually became Operation Paperback. Six years later, the nonprofit organization has sent nearly 150,000 books to American troops in more than 30 locations, including Afghani-stan, Iraq, Bosnia, and Kosovo.

When it comes to getting poetry into unexpected places, the sky's the limit for Billy Collins. Last fall the former United States poet laureate and author of eight books of poetry partnered with Delta Air Lines to create an audio program of poetry to be offered periodically to passengers on its entire fleet of airplanes.

Page One features a sample of titles we think you'll want to explore. With this installment, we offer excerpts from The Epicure's Lament by Kate Christensen and Sad Little Breathing Machine by Matthea Harvey.

Seek and Ye Shall Find: How to Obtain Reprint Permissions

by Mindy Lewis
Print Only

Tips for researching and acquiring reprint permissions for your published work.

Are Agents Necessary? One Author's Argument for Autonomy

by Steve Almond
Print Only

First: On the Path to Enlightenment

by Joanna Smith Rakoff
Print Only

On Elizabeth Kadetsky's debut book, First There Is a Mountain.

"All Trees Are Oak Trees.…": Introductions to Literature

Writers who hang out in academia to help pay the rent are likely to find that their job description comes to include inviting other writers to visit their campus and then hosting them through their visit, introducing them to their lecture audience, and sitting in on the informal sessions with students that typically complete the visitor's tour of duty. Such visitations are, I believe, a generally worthwhile feature of any college writing program: beneficial to the visitor, obviously, who gets paid or otherwise rewarded and may possibly gain a few additional readers; potentially enlightening for the visitor's audience (even those whose curiosity may be more sociological, anthropological, or even clinical than literary); and at least marginally beneficial for the host as well, as I shall attempt to illustrate.

Measures of Success: What Publishing Your Book Really Means

At some point every writer must turn her attention from the art of creating to the business of selling. And while many authors would like to avoid the industry altogether, a basic understanding of it—from the top five houses to the independents—is an unavoidable necessity.