In the spring of 2009, Michael Gustafson’s cousin e-mailed him to say she was granting him permission to date her best friend, Hilary Lowe. He was grateful, but there was one problem: He had never heard of Lowe, let alone met her. “I had no idea who this person was, but I e-mailed her and said, ‘I’ve been given permission to date you,’” Gustafson recalls.

“That was your opening line?” I ask. It’s February 2013, and Gustafson, Lowe, and I are sitting in a café in downtown Ann Arbor, Michigan, just up the block from the gutted storefront that the couple is trying to turn into a new community-minded independent venture: Literati Bookstore.

“Pretty much,” Lowe replies. Gustafson smiles, a bit bashful behind his glasses. She continues: “It was weird and goofy. What was I going to say? I loved it!”

At the time, Gustafson was living with his parents in Michigan, just outside Grand Rapids, having decided to leave Los Angeles, where he’d worked as an assistant on several television programs after finishing a film degree at Northwestern. But a few seasons in the business made him realize that his future wasn’t in Hollywood. Lowe, meanwhile, was living in New York City, working as a sales rep for Simon & Schuster. After their initial contact they began corresponding by e-mail, and within a few weeks they were sending each other books.

“That was our way of courting,” Lowe says. “We would just send each other books. I had never read Harry Potter, and so he sent me Harry Potter. And my favorite book was Too Loud a Solitude. It’s by Bohumil Hrabal—a book about loving books.” Six weeks passed before they ever spoke on the phone, while the words of authors—from Kittredge to Camus—passed back and forth between them.

“I fell in love with the way we communicated before I even knew what you looked like,” Gustafson says, the conversation shifting away from me and settling between the two of them.

“And it was never small talk,” Lowe tells him. “It was always just weird, nerd rants to each other.” She laughs. It’s a laugh that makes Gustafson smile again.

Sitting in a cozy café, a swirl of snow outside the  frost-glazed windows and this young couple across the table from me, I suddenly feel as though I’ve stumbled into a Nora Ephron movie. The casting and plot are spot-on: Attractive, intellectual twentysomethings—of the earnest, nonhipster variety—fall for each other via an epistolary romance. Cue the film montage: Gustafson arrives in Manhattan a few months later, he and Lowe spend a romantic fall dating in New York City, and the following year they move in together. In November 2011 they get engaged (close-up of the ring), in July 2012 they move to Ann Arbor with the sole purpose of opening a bookstore together (long shot of a U-Haul on the highway heading west), and in January 2013 they sign a lease and begin construction (dial up the sounds of saws and hammers).

There’s also plenty of dramatic tension to this tale. Remember that Ann Arbor is the birthplace of Borders, which brothers Tom and Louis Borders opened in 1971, while students at the University of Michigan. In 2011, when the company went bankrupt, it closed hundreds of stores, including the forty-thousand-square-foot flagship in Ann Arbor. The city was also home to iconic independent bookstore Shaman Drum—the Drum, as it’s known to the locals—which closed in the summer of 2009 after nearly thirty years in business. Six years earlier, a small plaque had been erected by the membership of the State Street Area Improvement Project to honor the Drum’s owner, Karl Pohrt, stating with simple thanks: “He kept our eyes on the prize….” The plaque still remains, a bittersweet reminder that Pohrt was able to help revitalize this downtown, but unable to weather the increasingly harsh climate of bookselling, which over the course of the past two decades has swept away nearly 75 percent of the seven thousand independent bookstores that once existed nationwide—more than a thousand of which closed between 2000 and 2007. In the years since, hundreds more have gone out of business, including the Drum.

Perhaps the economic tide of the country as a whole has turned. Or perhaps, more likely, Lowe and Gustafson have chosen exactly the right city at exactly the right time with exactly the right sort of store to succeed. As of Literati’s six-month anniversary, they seem to be making a go of it. But for the couple, whose initial meeting and blossoming relationship seemed somehow preordained, the success of their store up to this point has been no accident. The owners of Literati Bookstore are filled not only with exuberant optimism and staunch idealism, but also with practical determination. And most important, they have a business model to back up each step of the process.

Last February, however, Lowe and Gustafson’s vision of the bookstore was still forming, and the success of Literati Bookstore, much less its opening, was far from certain. After finishing our coffee, we hike through the snow to check out the progress on the renovation of the twenty-six-hundred-square-foot storefront at 124 East Washington Street—most recently the 2010 campaign offices for Republican Governor Rick Snyder—a space split equally between two floors: street-level and basement. Prior to Gustafson and Lowe’s negotiating their lease, the building stood empty for several years. (When they first showed it to me, in mid-January 2013, it was a wreck—particularly the basement, which was to account for half their floor space. Torn-up carpeting lay heaped in piles of debris, an exposed gas meter poked out of the fieldstone wall by the stairwell, and the uneven concrete floor looked like something you’d find in an old barn. No matter how long I listened to the couple describe their vision for this space, when I looked around all I saw was a basement.)

When we arrive at the store a month after that first visit, kicking the snow off our boots, the changes are dramatic. The basement joists are painted a fresh matte black, recessed lighting is in place along with new ductwork, and installation has begun on the first bookcases of the fifty such units they salvaged from the downtown Borders. The look is urban and chic, and I realize that these two not only have a precise dream for their store, but also a healthy dose of the midwestern work ethic needed to make it happen.

Of course, not everything is going according to plan. The wood floors upstairs have had to be torn out and are being replaced. Not only does this represent a significant cost that Gustafson and Lowe haven’t budgeted, but it’s also meant they’re having to push back their early-March opening. And with each delay, the complex calculus of how long they can stretch their seed money until the first book sales begin to provide even a modest cash flow is enough to make the most seasoned businessperson a bit fidgety. Inventory alone will account for more than a hundred and twenty-five thousand dollars of their start-up costs—which they are paying for with a significant loan from Ann Arbor State Bank plus smaller, but no less significant, loans from family and friends—and that’s a modest number of books for a store this size (a number they will try to nearly double over the summer as they begin to sell and are able to increase their stock), to say nothing of the overall costs associated with building out the store. 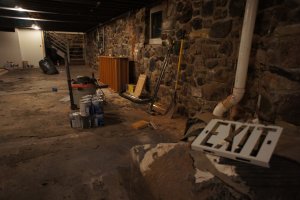