In a recent New York magazine article about the renaissance of indie bookstores in the city, Joe Keohane wrote, “New York’s independent bookshops were supposed to be long gone by now. After a decade of slow financial strangulation at the hands of the big-box stores, the web, the Kindle, and, finally, the recession, the fact that there are still Strands and McNally Jacksons standing seems positively miraculous.” Yet what is interesting about this article is not just the fact that new stores are opening and thriving in the city, but that McNally Jackson Books is likened to an institution like the Strand, which has been in business since 1927. Although Sarah McNally’s bookstore at 52 Prince Street in Manhattan certainly feels as though it’s always been a part of the New York City literary scene, the truth is that it was founded only six years ago, in December 2004. 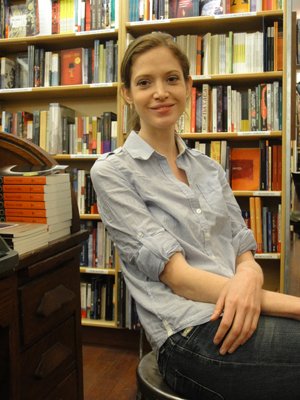 Perhaps part of the store’s sense of legacy has to do with the fact that McNally herself comes from a bookselling family. Her parents own several McNally Robinson bookstores in Canada—the flagship store in Winnipeg, and another in Saskatoon. In fact, though always owned and operated by Sarah, the store in New York City originally opened as a McNally Robinson. It became McNally Jackson in August 2008, both to end confusion about the store being independent from those run by her parents and to commemorate the birth of her child with her then husband, Christopher Jackson, executive editor at Spiegel & Grau.

It’s also clear that this store is an integral part of the fabric of this neighborhood. It’s located in a vibrant area of lower Manhattan—though technically in NoLita (North of Little Italy), it’s also on the eastern fringe of SoHo (South of Houston)—that is filled with boutiques, hip coffee shops, and trendy restaurants. On the Thursday morning that I showed up, there were already several people waiting for the place to open. One person sat casually on a bench outside the bookstore’s café, others chatted together on the sidewalk, and a few peered in the front windows at the beautiful display of arranged books.

“Beautiful” is perhaps the best way to describe Sarah McNally’s bookshop. The store is light and open and modern, yet still warm. Similarly, the worn hardwood floors and the gray slate tile in the café are a wonderful contrast to the glass and brushed aluminum staircase that leads to the lower level, as well as the sculptural “chandelier”—for lack of a better word—that hangs over the staircase, a piece resembling an enormous bunch of grapes the size of beach balls that has been constructed from bright, distorted, partially mirrored globes. From the lighting choices to the side tables, everything feels deliberate, unhurried.

It also feels personal. Every display in the store has a bit of cloth and flowers, a touch that McNally learned from her mother growing up. Similarly, the wallpaper that decorates the café is made up entirely from pages of McNally’s own collection of books. However, she jokes that it’s not quite as personal as she’d hoped it would be. When she brought her books to the wallpaper company, she’d selected specific pages that she’d written on, with the intention that after they’d been scanned and printed her marginalia would be visible alongside the text—a record of the conversation that she, like so many readers, has had with her books. But company personnel, thinking they were doing her a favor, laboriously erased every underline and scribble before they were finished printing. And because the remodeled café was scheduled to reopen the following day, she decided to hang the wallpaper anyway. Still, there is something comforting about sitting in her café, surrounded by all those pages of books.

McNally herself is a wonderful presence. When we met, she welcomed me into the store as if it were her home. She introduced me to staff, made sure I had something to drink when we settled at a long wooden table in the café, and asked me about my own writing projects before we began. Her vitality and openness not only draws a person to her, but also permeates the entire store. She is energetic yet grounded, with a genuine excitement for new ideas. And throughout our conversation she was quick to joke, never taking herself too seriously. Yet her commitment to bookselling and literature itself is deeply serious. She has high standards—for publishing, for her store, and for herself.

You grew up in a bookselling family in Canada. Did you know you wanted to be a bookseller from a young age?
No. I moved to New York to work in publishing, which always seemed so glamorous growing up in a Winnipeg bookselling family. And I did that for a few years, but it didn’t ultimately work well with my temperament. Perhaps I would be happier in an office now than I was then, but at the time it was torture, which I think is maybe what a lot of young people feel who work in offices. [Laughter.]

So while I was at Basic Books and Counterpoint, I did a few African American books. I used to go to the Harlem Book Fair every year and work at the publisher’s booth. Have you ever been to the Harlem Book Fair? You would not believe the throngs of people—you cannot move to get through the crowds. But people were coming up to my booth and discussing books of mine that they’d read. And just that electrifying moment of talking to a reader about a book that I’d edited made me realize how far I’d traveled away from that experience.

When you’re in publishing, your reader is so abstract. Your only readers are reviewers. Or your sales team. In-house, as an editor, you’re often the only person to read the book. I mean, when you get to be higher up you do books that people spend hundreds of thousands of dollars on and other people read, but I was not at that level. [Laughter.] So I missed actually talking to readers about books, and I thought, “This is where I want to be.” And I’ve never ever regretted that decision. The primary reason I love my job is because of talking to readers. 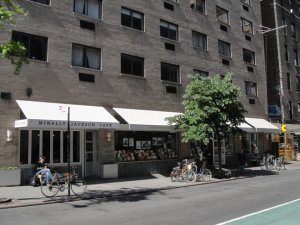