On Sundays at a community bookstore in the Washington Heights neighborhood of Manhattan, a group of a dozen or so people, ranging from high school kids to retirees, gather to make nonfiction comics. The eight-week course was started in 2018 by writer, illustrator, and graphic novelist Ellen Lindner to encourage people from all backgrounds “who are generally interested in art but for whom comics is a new medium” to tell personal stories in a new way. During the classes students learn how to draft ideas, write a script, make mockups, ink, and color, drawing inspiration from works like Lynda Barry’s One Hundred Demons (Sasquatch Books, 2002) and Emil Ferris’s My Favorite Thing Is Monsters (Fantagraphics, 2017). The session ends with presentations of the students’ work from the course. 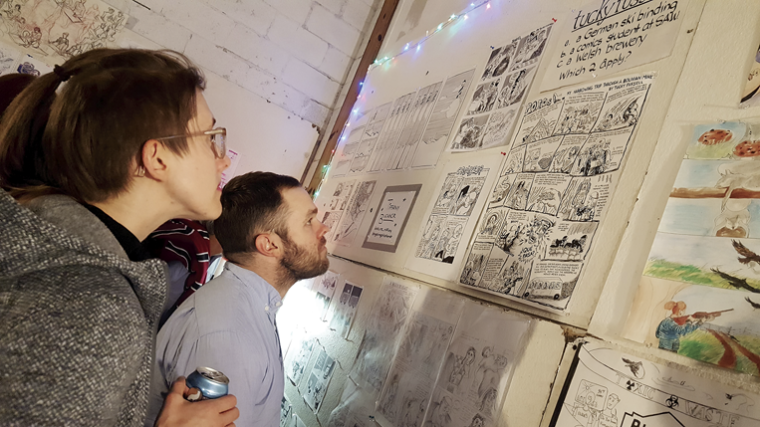 Graphic-storytelling classes like Lindner’s have popped up all over the country in recent years, in bookstores, libraries, and other community spaces, as well as at colleges, MFA programs, and summer workshops. This boom follows the rise in popularity of graphic novels and memoirs that bring forth the literary potential of the comic form. (Practitioners often call their work “comics”—which encompasses everything from one-liner New Yorker cartoons to photocopied zines to hundred-page literary graphic novels and memoirs—and many of them, who refer to themselves most frequently as “cartoonists,” make work spanning all of these categories.) Lindner, whose graphic novels include The Black Feather Falls (Soaring Penguin Press, 2015), says the mass-market success of books like Marjane Satrapi’s Persepolis (Pantheon, 2003) and Alison Bechdel’s Fun Home (Houghton Mifflin, 2006) led to graphic novels “entering the collective consciousness” in the United States in the early 2000s, while the rise of visual digital media (like Instagram) has created a culture that is more visually attuned. “Telling stories with images used to just be for children,” she says. “Now it can also be for adults.”

Cartoonist Josh Neufeld, who has taught numerous classes and workshops over the years and whose own work includes nonfiction comics that have tackled such topics as Hurricane Katrina and the cultural influence of the media, agrees. “We’re becoming more of a culture connected to visual literacy, and the pithiness and efficiency of comics fits into the era of Twitter and quick hits.”

Although he had previously given more informal workshops, Neufeld says he first started teaching “for real” in 2010, when the U.S. State Department sent him to Algeria, Burma, and Egypt to serve as a kind of cultural ambassador and talk about comics and lead workshops for people ranging from middle school students to local cartooning professionals. Today he teaches in the BFA program of the School of Visual Arts, Queens College’s English MFA program, and Pine Manor College’s Solstice Low-Residency MFA program. Neufeld’s art school classes tend to focus more on drawing technique and culminate in grueling critiques with the department chair, while his classes for writers emphasize questions of how images are used in storytelling and how to “convey prose with a gesture or angle”—what writing teachers like to call “showing instead of telling,” except in visual form. At Solstice and Queens College, Neufeld feels like a writing teacher, exploring the themes, characters, and pacing of a comic more than the act of drawing itself. While most of his creative writing students don’t know how to draw, he says they’re “eager and excited about working in a new form.” He helps students work past insecurities about their technically imperfect drawing skills (“I remind them of some of the great comics by people who can’t draw very well, like Matt Groening and Lynda Barry”) and breaks the class into small workshop groups.

Jason Adam Katzenstein, a cartoonist for books such as The White Man’s Guide to White Male Writers of the Western Canon (HarperCollins, 2019), says he thinks of learning to create comics as learning a new language, one that combines words and pictures in a very particular way in order to communicate. Katzenstein graduated in 2013 from Wesleyan University, with a degree from the same English department for which he now teaches; he wrote a graphic novella as his thesis project. He remembers that as a student he particularly enjoyed working with poets. “Comics are a staccato medium, with evidently small elements adding up to bigger ones,” he says. “Comics panels feel like stanzas in a poem.”

As Lindner points out, there’s a great tradition of comics poetry. She mentions Ink Brick, a “micro press dedicated to comics poetry,” and comics poets like Alexander Rothman and Paul K. Tunis (cofounders of Ink Brick), as well as Vidhu Aggarwal, Alyssa Berg, Matt Madden, and Bishakh Som, who have furthered the melding of poetry and illustration. “Some of the first comics I made were illustrated poems,” Lindner says. “Comics as a discipline is all about boiling down and distilling writing.”

Tom Hart, founder of the Sequential Artists Workshop (SAW), a nonprofit comics school in Gainesville, Florida, encourages writers to take the art beyond illustration. “Writers know structure and how to tell a story,” says Hart, whose graphic memoir, Rosalie Lightning (St. Martin’s Press, 2016), was a New York Times best-seller, “but when they approach the page of a comic, the tendency is to take words and illustrate them, which is a very dry approach.” In SAW’s classes students learn instead to fuse words and pictures to help convey a coherent story. Hart, who thinks of himself as a writer first and an artist second, teaches numerous classes at SAW, including the online course Comics and Visual Storytelling for Writers. He thinks making comics helps writers to gain “more dexterity” in precise storytelling and “stimulates the visual imagination.”

“The key with comics is words and pictures that say the same thing, the synergy of the two,” says R. Kikuo Johnson, who has taught comics at the Rhode Island School of Design since 2009 and whose books include the children’s graphic novel The Shark King (Toon Books, 2012). Although he teaches art students, Johnson treats his course more like a “writing class with pictures.” Even his class’s critiques are framed more like a traditional writers workshop: “Everyone talks about the comic except the person who made it,” he says. Over the years, Johnson has found that it’s particularly helpful for him to read each comic aloud to the class, which tends to reveal any holes in the storytelling. “It’s all about clarity,” he says, “and [determining whether] what I think is on the page [is] actually on the page.”

Back at the bookstore in Washington Heights, Lindner takes pride in the fact that her graphic memoir class gathers such a diverse group of students. (Class materials are available in both English and Spanish.) “Comics is much nicer as a medium when people from all different backgrounds [participate],” she says. “It’s a very elastic form and one of the cheapest media on the planet. All you need is a pen and paper. It taps into the DIY tradition in American culture.” Comics also taps into the culture of democracy—it is an art form truly open to everyone, regardless of writing or artistic skill or even native language.

Elena Goukassian is an arts writer who lives in Brooklyn, New York. Her most recent work appears in Artsy, Aperture, Lapham’s Quarterly, and the Nation.

An increasing number of classic books, such as To Kill a Mockingbird and Anne Frank’s diaries, are being adapted into graphic form.

The Written Image: Imagine Wanting Only This
by Staff | News and Trends 4.12.17

Writer and artist Kristen Radtke’s debut graphic memoir, Imagine Wanting Only This, combines vivid illustrations with an unflinching investigation of loss, memory, and the construction and dissolution of the self.