Twenty-five years ago, a group of young black poets made a pilgrimage to New York City’s Cathedral Church of Saint John the Divine to pay their respects, along with a host of contemporary literary lights, to James Baldwin, who had recently passed away. While the grief accompanying the loss of a force in African American literature was palpable, poets Thomas Sayers Ellis and Sharan Strange found themselves imbued with a certain energy by the memorial service, returning to their shared house in Boston with a mission—to forge connections and help others connect with living black authors whom they saw as their elders. Earlier this year Ellis, Strange, and a group of fellow writers from the community that was formed as a result of that mission traveled to the nation’s capital to celebrate their ties as members of the Dark Room Collective (DRC). 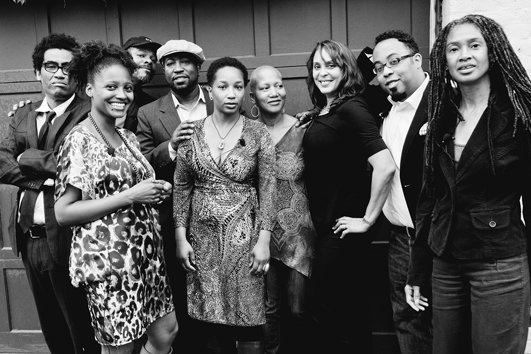 “It’s a revival,” said Ellis after the DRC gave a group reading at Washington’s Lutheran Church of the Reformation, the second stop on the “Nothing Personal” reunion tour (the first DRC reading series to take place in fourteen years), which kicked off in April at the Poetry Foundation headquarters in Chicago. “I got the feeling onstage that we were sharing a space all over again. That’s the thing that gets carried over—the togetherness.”

The idea of shared space was key to the vision Ellis and Strange worked to realize more than two decades ago, as they began to reach out to established authors such as Samuel R. Delany, Ntozake Shange, Derek Walcott, and Alice Walker and invite them to Boston for readings and discussions with apprentice writers. Along with writer and lyricist Janice Lowe, Ellis and Strange set up headquarters at 31 Inman Street, a Victorian house they shared in Cambridge, where the two were already embarking on another project of literary appreciation: building a collection of first editions by black authors in a space in their home once used as a photography darkroom—hence their chosen moniker.

For Lowe and the other young writers who eventually joined the collective—Tisa Bryant, Major Jackson, Carl Phillips, Tracy K. Smith, Natasha Trethewey, and Kevin Young among them—the readings at 31 Inman became a refuge. “The racism in Boston at that time was not subtle,” recalls Lowe. “At bookstores it was hard to find books by black writers.” Lowe was actually brought into the fold after a chance encounter with Ellis at a local bookstore during which he offered to lend her a copy of an Ishmael Reed novel unavailable in the shop. “And as a young poet, I was the only black person in my writing workshops, and it was very lonely,” Lowe adds. “Only the poet-professor would deal with me and engage with my work.”

Novelist and former Ploughshares editor Don Lee, who now directs the MFA program at Temple University, found similar solace in the society the DRC created. A member of the collective’s “extended family,” as Strange puts it, Lee says that as a Korean American in late 1980s Boston, he would go to readings and find that he was the only “nonwhite” person in the room. “When I first went to one of the Dark Room Collective readings, it was really heartening and inspiring and startling to be with other writers of color.” Lee says he was so moved by these experiences that he wrote the Lannan Foundation and helped the DRC secure a grant to take the burden off the collective’s members, many of them students, who often paid for readers’ travel and lodging out of their own pockets—though many authors declined honoraria. (And the inspiration didn’t stop there: Lee’s latest novel, The Collective, published this month by Norton, is centered on a group of Asian American artists who band together in Boston, directly informed by the DRC.)

Strange recalls a particularly poignant moment during a reading by Alice Walker. At the time of Walker’s visit, the readings hadn’t yet moved from the intimate old Victorian to one of the larger venues—Boston’s Institute of Contemporary Art and the Boston Playwrights’ Theatre—they eventually occupied as the series grew. During the Q&A following Walker’s performance, a woman in the audience broke down and started crying. “The woman said, ‘For the first time I feel as though I’ve found community, and I don’t feel isolated in this town,’” Strange says. “And Walker got off her chair in the front of the room and went over to her and hugged her. And I thought, ‘Wow, I’m witnessing Alice Walker just being a person, not being a famous writer, when she comforts this woman.’ This is what the Dark Room is about, creating community and a sense of family, and helping people.”

In addition to offering a venue for established authors to read their work and cultivating an audience eager to listen, the DRC facilitated mentorships between the luminaries it “claimed” and emerging writers, many of whom have since carved out successful careers themselves. In a 1996 issue of the New Yorker, poet Cornelius Eady said the group “could turn well out to be as important to American letters as the Harlem Renaissance.” Indeed, its members have published dozens of books of poetry, fiction, and nonfiction, and many have gone on to establish themselves on the faculty of writing programs across the country. They have also received fellowships from the Guggenheim Foundation, Whiting Writers’ Awards, finalist nods for the National Book Award and the National Book Critics Circle Award, and recognition from the Lambda Literary Foundation. And just this year, Smith became the second DRC member to win a Pulitzer Prize in poetry, for her collection Life on Mars, published last year by Graywolf Press. (Trethewey won the prize in 2007 for Native Guard, published by Houghton Mifflin in 2006.)

“I feel like the Dark Room Collective gave me a vocabulary for envisioning what it would mean to be a writer,” said Smith, who now teaches at Princeton University, in a flush of excitement during a party for the recent tour stop in D.C. where, incidentally, the young writers of the collective had given their first group reading, back in 1990.

Ellis says he cofounded the DRC in part “to make it a little easier for those who come after us,” and other groups have arisen with similar goals in mind, most prominently Cave Canem, the poetry organization founded by Eady and Toi Derricotte in 1996. Still, Ellis, who teaches writing at Cave Canem’s retreats as well as at Sarah Lawrence College and Lesley University, emphasizes that there is much work to be done. “How many black writers get published?” he says. “How many people can tell you the name of a black editor? We still need to [in the words of James Weldon Johnson] ‘lift every voice and sing,’ because if we don’t all sing together, they might not hear us.”

The DRC continues its reunion tour this coming winter at New York City’s Poets House and will return next March to Boston to present at the 2013 AWP Annual Conference & Bookfair. For news and highlights from tour stops, visit the DRC page on Facebook, www.facebook.com/thedarkroomcollectivereuniontour.

Rochelle Spencer teaches at LaGuardia Community College in New York City and is the author of the novella Ella Jones and Her Magical Vagina, released as a Kindle Single in June.

Moving into new poetic territory, Major Jackson, in his third collection, Holding Company, corrals the ecstatic in a ten-line form.

A decade after the founding of Cave Canem, Eady speaks about the ways in which the organization has developed into a "safe haven for black poets." 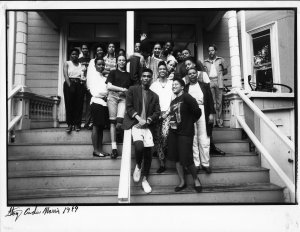 The Dark Room Collective, a community of black writers founded twenty-five years ago in Boston by poets Thomas Sayers Ellis and Sharan Strange and musician Janice Lowe, regroups this year for the Nothing Personal reunion tour. This slideshow offers...
X