Last month Cave Canem, a nonprofit organization committed "to the discovery and cultivation of new voices in African American poetry," celebrated its tenth anniversary with a four-day schedule of events in New York City, featuring a keynote address by Walter Mosley; panel discussions; a reunion of fellows of the organization's summer workshop and retreat; a reading by the winners of the Cave Canem Poetry Prize, given annually for a first book of poems; and a reading by Cave Canem faculty, including Cornelius Eady, who founded the organization with Toi Derricotte in 1996. 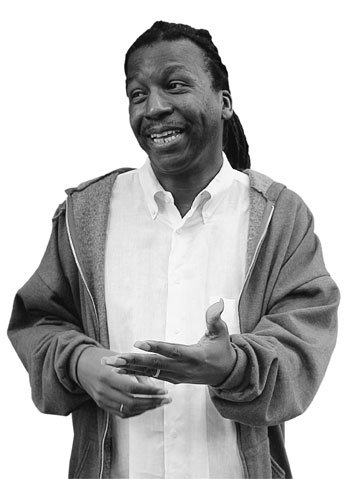 Eady is the author of six poetry collections, including Brutal Imagination (G. P. Putnam's Sons, 2001), which was a finalist for the National Book Award, and the recipient of fellowships from the Guggenheim Foundation and the Rockefeller Foundation, among others. He is currently the director of the creative writing program at the University of Notre Dame.

A decade after the founding of Cave Canem, Eady spoke about the ways in which the organization has developed into a "safe haven for black poets."

How is Cave Canem different from other workshops?
I have seen poets take breathtaking leaps of faith while at Cave Canem, and I think it's because, in part, they know they're in a context where it's okay to risk failure. I don't think the Cave Canem workshops are any different per se from what you call a "mainstream" workshop, but I do think Cave Canem participants infuse everything with an energy that comes from feeling involved and invested in the space. Toi and I felt that was the case from the very first summer, when we looked at each other and asked, "Who's running this?"

What made you realize that the world, particularly literary America, needed Cave Canem?
One isn't always lucky enough to know what the results of his actions might be. Cave Canem is now seen as a bit of a literary movement, but I can tell you, Toi and I weren't thinking in such global terms back then. Our main concern was simply, "Would anyone come to such a place if we could get it up and running, and, if so, how long could we run it?" Nobody was beating down the doors to fund something like this. We decided to pay for the first two, three years out of our own pockets.

Has working with such a purposeful and culturally based community challenged or complemented your own aesthetic journey?
The focus of the workshop is, quite rightly, on the participants. But I've seen how it affects the faculty as well. Most of us have rarely had an opportunity to teach to this number of African American poets at one setting. I've taught at a lot of campuses, had a good number of workshops that I personally felt were very unique, and I will carry the experience with me. But there's nothing that compares with the Cave Canem workshop, and it changes you. I remember the summer my wife, Sarah Micklem, and I were driving Marilyn Nelson somewhere when she [mentioned] this idea she had for a writers retreat for writers of color. That became what's now known as Soul Mountain. That's how teaching at the workshop affects you; you want more, you want it where you live, and you want to share it with as many folks as possible.

In what new ways will Cave Canem shape the future of black poetry?
Cave Canem is a small pebble that, as it turns out, [has] had ripples ten years long. This is good luck and good timing of course, as well as very hard work, and I hope we'll keep this going as long as it makes sense and has good use for folks. But the work of illuminating the art of African American poetry is much larger than any one organization.

Thomas Sayers Ellis is a contributing editor of Poets & Writers Magazine. His first book of poems, The Maverick Room, was published by Graywolf Press in 2005.

Poets House, the nonprofit poetry library and literary center in New York City, announced recently that it will honor Cave Canem founders Toi Derricotte and Cornelius Eady with the Elizabeth Kray Award, given biennially to individuals who serve...