First we heard from authors (May/June 2003), then assigning editors (July/August 2003) on book reviewing, and in this issue we hear from the reviewers themselves. Our final installment of On Reviews presents the perspective of those who dedicate their time to reading, thinking, and writing about books.

When Michael Dirda was in seventh grade, someone told him that Crime and Punishment was a mystery. He liked mysteries, had read the Hardy Boys, among others, so he went to the library in search of Dostoyevsky’s tome. He checked it out and read it—in three days. “I couldn’t put it down,” says the Pulitzer Prize–winning critic. “I just thought it was the best book I’d ever read in my whole life. I still think it’s one of the best books I’ve ever read.” 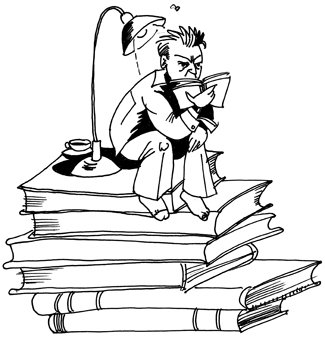 From that day on, Dirda says, he never read another kids’ book. Instead, while his friends were stealing ballpoint pens from the local five-and-dime, he spent his time perusing the paperback racks, discovering books like Immortal Poems of the English Language, and memorizing verse on the way to school. This was a boy from the Ohio steel town of Lorain (the same city where Toni Morrison was raised), a boy whose father, a high school dropout, would, on occasion, kick his son’s book from his hands. Dirda took reading seriously then, and he does now. In fact, this October Norton will publish his memoir, An Open Book, “a portrait of a reader as a young man,” as he puts it.

It stands to reason that book reviewers enjoy reading. After all, as was noted in the first two installments of this series, they must choose (often with the help of assigning editors), from the immense heap of books that accumulates each year, the titles to read and write about—in fewer and fewer words, under deadline, and for not much pay.

It wouldn’t be a stretch to call book reviewing a labor of love, except for the fact that it is so often a vilified profession. Reviewers are accused of having agendas and of cronyism, are called show-offs and career-killers. It’s a lot of heat to take for some free books, a few bucks, and a byline.

So what’s the draw?

“I think a lot of people have this itch to be in something that might be called the cultural conversation. [Reviewing] is one of the most direct paths in,” says Sven Birkerts, whose reviews have appeared in the New York Times Book Review, Esquire, and the Boston Globe, among other publications. “You really are interacting with authors and readers. You’re playing the culture sport, and there’s a lot of satisfaction in doing that.”

For Laura Miller, Salon senior writer and biweekly columnist for the New York Times Book Review, the appeal of writing reviews is the appeal of writing in general—“getting a chance to work out what you think and to put your point of view out there as part of the big conversation. And it’s great to be able to read all these books that I might not have the time to read otherwise if it weren’t my profession.”

Of course, not all books provide a singular reading experience, but there’s the thrill of finding those that do. “When you come across that sense of amazing discovery you think, ‘Boy, all those mediocre books—it was worth slogging through them to get to this,’” says Jonathan Yardley, Dirda’s colleague at the Washington Post Book World and also a Pulitzer Prize winner in criticism.

Dirda says that the happiest hours of his life are those six hours in the evenings when he writes his weekly piece for Book World. The act of writing and the idea that his work serves “to keep reading going, to keep the excitement of books alive for another generation or two,” compels him.

“Reading of any kind is a leisure activity,” says Miller, “and if we make people feel like they’ve wasted their time, they’re bored, they could have been watching Sex and the City, then all we do is discourage them from reading again the next time they have a choice. Our job is to be interesting and to make people feel like they’ve added something to their lives by reading what you’ve provided, even if all they’ve done is laugh.”

But not everyone is laughing. Book reviewers and the state of book reviewing itself are often under assault, especially by authors. In the inaugural (March 2003) issue of the Believer, a monthly literary magazine, novelist and coeditor Heidi Julavits wrote in her introductory essay, “I fear that book reviews are just an opportunity for a critic to strive for humor, and to appear funny and smart and a little bit bitchy, without attempting to espouse any higher ideals—or even to try to understand, on a very localized level, what a certain book is trying to do, even if it does it badly. This is wit for wit’s sake—or, hostility for hostility’s sake.… I call it Snark, and it has crept with alarming speed into the reviewing community, infiltrating the pages of many publications.”

Undoubtedly, “snarky” reviews receive a lot of attention. Take, for example, Dale Peck’s review of Rick Moody’s book The Black Veil: It has continued to be discussed and written about since it appeared in the New Republic last year. So, is getting attention the point? “There is a certain snarkiness that has arrived, a certain wise-ass quality, and a certain tilt in some quarters toward sensationalism,” says Birkerts, who has written for the Believer. “It’s a temptation that’s very palpable. You write a review and you know that the sassier you get, the more attention your review is likely to garner, and everyone is doing it more for the attention than the money. Most people try to resist that, but human nature is fallible.”

While Birkerts understands how it happens, he doesn’t condone it. He saw Peck’s review as sending poison into the system. “I went on record deploring it, really. To me it seemed all too transparent. It wore its hatchet on its sleeve, to mix a metaphor.”

Hatchet is an apt word for Birkerts to choose, considering that Peck’s collection of reviews, forthcoming from the New Press next year, is titled Hatchet Jobs. Peck says he was completely shocked by the reaction to the Moody review, as he had been writing reviews of the same nature—one calling for the end of gay literature, another slamming David Foster Wallace’s Infinite Jest, another lambasting the vogue of black women’s fiction—for about eight years. “All of those book reviews kerplunked into the silence out there,” he says. “To suddenly have this be a cause célèbre and to have people line up on one side or the other was really surprising to me.”

It’s likely, though, that the review was singled out for its opener, which accused Moody of being the worst writer of his generation. However, according to Peck, “As the next paragraph makes clear, that was nothing but hyperbole—a piece of hyperbole any number of publications seem to take great delight in quoting out of context.” Peck admits that he was being snarky—or to use his term, “bitchy”—but he says he doesn’t regret writing the review.

“There’s one thing that I care about more than anything else, and that’s literature—particularly the way that literature affects people. When I write these book reviews and I seem to get all hopping mad and angry, it’s because I am all hopping mad and angry. I tend to get more angry with people that I really think are just dicking around with their talent,” says Peck. “When I called Moody the worst writer of his generation, basically what I meant is that he has deviated farther from his natural and, I think, very considerable talents than any other writer.”

Peck agrees with Julavits that snarkiness has its limitations, and he doesn’t want to be pigeonholed as a negative reviewer. In fact, he has vowed that from now on he will dedicate himself to championing books by writers whose work he values. But, he says, “My biggest problem with the Julavits piece was that nowhere in it does she allow for the fact that people are saying what they actually mean, nor does she allow for the fact that people might actually be right.”

Book review editors—those powerful yet inundated tastemakers who choose from the more than 130,000 new books published each year the mere shelfful that are reviewed—get used to (and bored with) having nasty motives ascribed to them. This second...