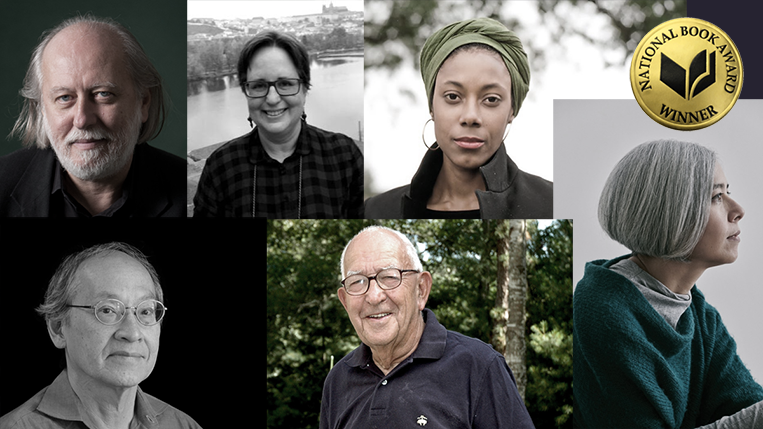 The annual awards are given for the best books of poetry, fiction, nonfiction, young people’s literature, and translated literature published during the previous year. The winners each receive $10,000.

Actor and longtime host of the PBS show Reading Rainbow LeVar Burton emceed the evening. He opened the ceremony by celebrating the importance of literature. “Literature is the birthright of every one of us—if you can read in at least one language, you are, in my definition, free,” he said. “No one can pull the wool over your eyes.”

Earlier in the evening, writer and indie bookstore owner Ann Patchett presented the Literarian Award for Outstanding Contribution the American Literary Community to Oren Teicher, the CEO of the American Booksellers Association. “The creativity, ingenuity, and resilience of booksellers is nothing less than remarkable,” said Teicher. “I accept [this award] on behalf of the thousands of indie booksellers across this country who every day thousand and thousands of times perform that special act of magic of placing the right book in a reader’s hands.”

Director, actor, and writer John Waters presented the Medal for Distinguished Contribution to American Letters to Edmund White, saying, “He is beyond distinguished…but he’s disreputable too.” A fiction writer, biographer, and cultural critic, White has published several books, including In Hotel de Dream and States of Desire: Travels in Gay America. According to the National Book Foundation, White and his work “remain central to any consideration of gay male life in late twentieth-century America.”

Established in 1950, the National Book Awards are some of the most prestigious literary prizes given in the United States. In 2018, the awards went to Justin Phillip Reed in poetry, Sigrid Nunez in fiction, Elizabeth Acevedo in young people’s literature, Jeffrey C. Stewart in nonfiction, and Yoko Tawada and Margaret Mitsutani in translated literature.