Feminism has roared to the forefront of the conversation in recent years, becoming a mainstream ideology of pop culture, business, and politics, and claiming spokespeople from Beyoncé to Sheryl Sandberg to Hillary Clinton. In the writing world this also holds true. A recent backlash against gender disparity in the literary community has led to projects like VIDA, whose annual count tallies bylines in major literary publications by gender and holds editors accountable for numbers that skew male. While some improvement can be seen—in recent years VIDA has documented several previously male-dominated magazines inching closer to byline parity—many numbers across disciplines remain stark: In 2015 a Women’s Media Center report found that women on average represented only 37 percent of bylines at major print newspapers, and a Writers Guild of America study found that only 29 percent of television writers in the 2013–2014 season were female. Another initiative on the front lines of the literary feminist movement is the biannual, bicoastal event known as BinderCon, a conference for women and gender-nonconforming writers that will hold its fifth major event in New York City from October 29 to October 30. 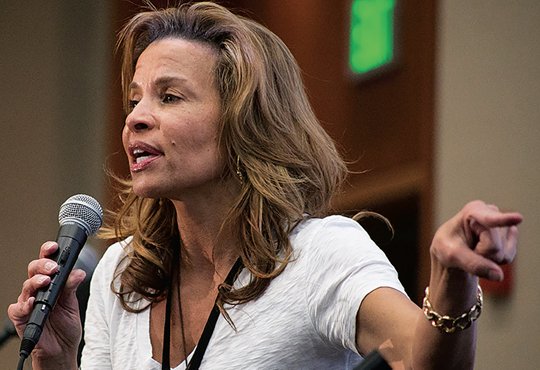 Launched in 2014, BinderCon cheekily references former Republican presidential candidate Mitt Romney’s infamous “binders full of women” gaffe, which came in response to a question about pay equity for women in a 2012 presidential debate. BinderCon, which alternates between New York City and Los Angeles in order to attract talent from both the publishing industry and Hollywood, combines panels, pitch sessions, keynote addresses, and networking opportunities, aiming its programming at experienced and emerging writers alike.

The idea for the conference began when a clandestine Facebook group of women and gender-nonconforming writers, founded by writer Anna Fitzpatrick, exploded in membership, attracting the interest of Lux Alptraum, a freelance writer specializing in sex and tech who formerly edited fleshbot.com, and Leigh Stein, a poet and author whose third book, the memoir Land of Enchantment, was released by Plume in August. The two wanted to create something similar to the online group, but out in the open and in the flesh. They cofounded the nonprofit organization Out of the Binders and launched their first conference within months of the initial idea. Since then the number of attendees has been on the rise—the last conference in New York brought in five hundred fifty attendees, and Alptraum and Stein expect more in October.

“We’ve been able to do a lot because Leigh and I are both workaholics,” Alptraum says. “But also because we have a social mission that has spoken to a lot of people.” Previous and future speakers include poets, novelists, book editors, agents, activists, investigative reporters, and editors from magazines such as the New Yorker and Rolling Stone. Speakers have included award–winning poet Claudia Rankine, writer and director Gina Prince-Bythewood, journalists Anna Holmes and Jill Abramson, and actor Lisa Kudrow. The keynote speakers for the October conference will be Elif Batuman, Porochista Khakpour, and Anna Quindlen.