This cross section of writers and performers encapsulates what makes BinderCon unique: While there have been feminist conferences for journalists such as Women, Action, and the Media, and women-oriented creative writing residencies such as the Hedgebrook program near Seattle, BinderCon combines the worlds of creative writing, journalism, publishing, and screenwriting, emphasizing the common obstacles that women and gender-nonconforming writers face in these fields, and encouraging attendees to try writing for new outlets. 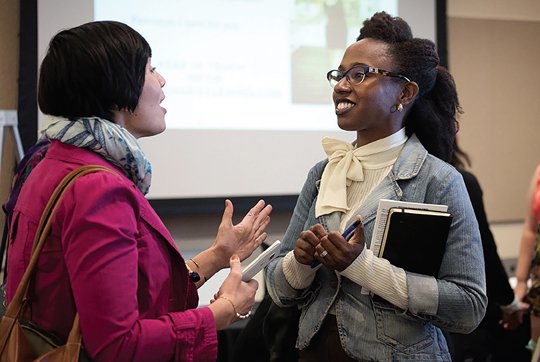 Sessions and panels at a typical BinderCon include practical topics such as starting newsletters, pitching work to agents, and craft talks on everything from fiction, poetry, copywriting, animation, and personal essays about illness. The BinderCon approach to writing is “about society” more than any industry, says Alptraum. “Fundamentally our approach is about getting women and gender-nonconforming people paid.” This isn’t a conference that involves marching or petitioning for pay equity and parental leave, but it does include those ideas as part of a broader mission: making sexist working and writing environments unacceptable, keeping editors and publishers accountable for the people they hire, and promoting the work of women and other marginalized writers. “People are starting to realize that a writers room or staff of just white dudes is not okay,” says Alptraum.

This past June Alptraum and Stein attended the United State of Women Summit at the White House and saw the same ideas expressed by major figures such as television writer and producer Shonda Rhimes and Michelle and Barack Obama. “Our vision for the world comes from the idea that the stories we’re exposed to affect how we see ourselves,” Stein says. As such, she and Alptraum want to make BinderCon a space where historically marginalized writers can share their stories.

It’s a lofty vision for an organization with no full-time paid staff, which relies on volunteers and sponsorships from foundations and publications to maintain its programming. Alptraum and Stein admit it’s a challenge, but they’re hopeful about BinderCon’s future. One significant goal has been to make the conferences more accessible, with initiatives including child care stipends, transgender-friendly bathrooms, scholarships, and an effort to continually address problems of inclusiveness and intersectionality. Whether or not feminism remains trendy on a national level, being a feminist organization means being open to critique from within, and the BinderCon staff vows to keep improving. “We’ve been listening to the community,” says Stein. Alptraum agrees: “It’s not just about trans and gender-nonconforming writers, but also writers of color and disabled writers. We’ll keep trying to accommodate as many people as possible.”

Sarah M. Seltzer is a writer of fiction, creative nonfiction, journalism, and ill-advised tweets. A lifelong New Yorker, she is the deputy editor of culture website Flavorwire.com.