An Artist’s Game of Telephone

In 2010, Nathan Langston, a multimedia artist and software engineer who had just moved from Portland, Oregon, to New York City, was lonely. He wanted to meet artists working in other genres and build a collaborative community but had no idea how to begin. Then it hit him: He could play a game of Telephone, the classic playground game in which a phrase gets whispered from person to person, inevitably changing along the way. The beauty of Telephone is that it’s simple and universal—for example, it’s known as dengon gēmu in Japanese, teléfono descompuesto in Spanish—and, in Langston’s version, gives just enough restriction to unleash creative freedom. Langston started with one fragment of poetry, gave it to an artist to translate into a new work, then took that piece, presented it to the next artist for reinterpretation, and so on. Those first rounds were low-tech, just “me on the subway in New York City, hauling a painting to some artist’s apartment—Here, turn this into a film or sculpture,” says Langston. He quickly realized that a physical switchboard of one wasn’t sustainable and transferred the process to the internet. By 2015, when he ended the first Telephone project, he’d gathered more than three hundred iterations from the initial launch. 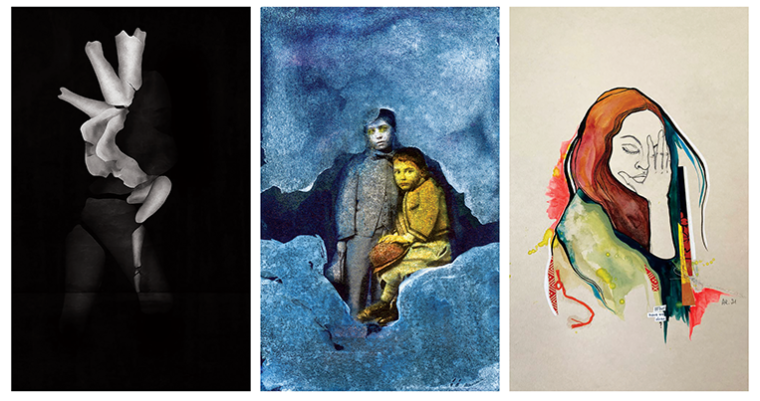 Langston hadn’t planned to run another game of Telephone—but then the pandemic hit. With many cultural institutions shut down overnight, and people isolated and scared, Langston realized the game could be a godsend. “No one would have to be in physical proximity,” he says, and the game “creates a weird and powerful intimacy between strangers.” So in March 2020, Langston, who was now living in Seattle, hopped back on the horn to start the game again. For this version’s seed, Langston selected a short prose passage by the British biologist Mike Shanahan about an Indian banyan tree. Langston wanted the passage’s message to reflect the themes of the project itself, and the banyan seemed germane, since a single plant can grow to look like a whole forest. The original passage inspired six pieces of art, and the project expanded for six rounds with contributions from artists from seventy-two countries. Langston then flipped the process: Instead of assigning one work as inspiration for two or three artists, he assigned two or three pieces as source material for a single person, so that the game would work forward and backward: a Telephone ouroboros.

Langston and his team tried to ensure that each writer, visual artist, or other creator would be translating not only the message, but the medium; for instance, a poet would be assigned a sculpture. “In general we tried to go abstract, figurative, abstract, figurative,” Langston says. Priscila Chu, a Hong Kong–based composer and arts educator, created the final iteration: a short piano composition in which one note bursts into several chords, contracting and expanding in dark chord progressions and occasionally releasing high notes like tendrils unfurling into the ether.

Langston launched an online exhibit of Telephone in April 2021, an interactive gallery that is part rabbit hole, part labyrinth, and all treasure trove. An elaborate game map charts the generations of artworks that inspired other artworks, a diagram that resembles a Hoberman sphere with pathways multiplying outward to converge again at the end. Viewers can click through the artworks, following the flow of ideas among contributors, looking for connections, and sometimes stumbling on coincidence that feels eerie.

For Kate Angus, a poet then based in New York City, Telephone was a lifeline. She had participated in the first game and loved it, she says, because the process forced her to “take herself out of the equation.” During the first game, she made a persona poem based on the artwork that was completely different from her usual writing and became an important piece in her book. But in the spring of 2020, Telephone meant much more. “It was a way to engage with something that wasn’t my own brain saying, I don’t want us to die,” she says. At that point in the pandemic, “All we could hear was silence or sirens.” Her partner had been diagnosed with cancer in January 2020, and he was just recovering from a major surgery when the city’s lockdown began. The two didn’t leave their one-bedroom apartment for nearly a year. Playing Telephone was one of the rare moments Angus could set aside worry and enter into conversation with someone else in a way that was physically safe yet emotionally vulnerable. “It was a gift to be able to get outside of myself and to share in this sustained global artistic creative community,” says Angus. The first game, she says, was a beautiful thing; this game was a “beautiful necessary thing.”

The finished Telephone exhibit is as much about the collective experience of making Telephone as it is about the individual pieces themselves. As Langston puts it, “You can think of this as an exhibition of a thousand works of art, but you can also think of it as one work of art.” The project’s data visualization is a work of art in its own right. But perhaps the most meaningful part of Telephone isn’t even the work itself but the way it highlights the creators behind the game. Each artwork’s page in the gallery includes a photograph of the location where the artist created their work, as well as an artist’s statement about the process and product. The world map in the exhibit shows where the artists involved live. The exhibit, then, shows the way art spreads and disseminates in real time, giving a voice to each node. Telephone proves a healing corrective to the pervasive images of contagion as spreading illness as well as a reminder that being a vector doesn’t have to be a death knell; we can spread creativity, too.

Adrienne Raphel is the author of Thinking Inside the Box: Adventures With Crosswords and the Puzzling People Who Can’t Live Without Them (Penguin Press, 2020), and What Was It For (Rescue Press, 2017), winner of the Black Box Poetry Prize.

Secrets Hidden in the Stacks
by Adrienne Raphel | News and Trends 6.10.20

The Book Traces project at the University of Virginia documents annotations, marks, and objects found in library books, creating a record of readers’ engagement with the book as a physical object.

Authors Thinking Outside the Book
by Adrienne Raphel | News and Trends 12.12.18

Using found objects and handmade pieces of art to publish new works of literature, a small press in Baltimore expands the understanding of what it means to be a book.