One might not expect to find the center of American poetry here, hanging off the northwest corner of the country, in a white building set on the grounds of a decommissioned military base. But this is where Copper Canyon Press operates: Fort Worden, in Port Townsend, Washington. From just a few rooms in what was once a cannon foundry, Copper Canyon has achieved outsize national and international acclaim. 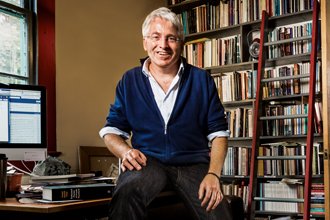 Founded on a shoestring in 1972 by Sam Hamill and Tree Swenson, with Bill O’Daly and Jim Gautney, Copper Canyon Press started as a letterpress printer of poetry. Four decades later it has published more than four hundred titles, including winners of the Pulitzer and Nobel Prizes and the National Book Award, and inspired countless other independent-minded editors to start their own presses.

At the center of the publishing operation today is editor in chief Michael Wiegers, who started working there in 1993 (two years after Swenson left the press, following her separation from Hamill). After working for years in the poetry section of bookstores in Boston and the Twin Cities, followed by a stint at Coffee House Press, where he learned about editing and publishing under the late Allan Kornblum, Wiegers joined Copper Canyon as its managing editor, and over time his responsibilities accrued. After Hamill left in 2004, Wiegers was named executive editor. Now with a small team, and still an independent nonprofit, Copper Canyon publishes twenty books a year.

How did you find your way to Copper Canyon?
After college I worked for a stint at a brewery and then in bookstores. I had a good education, but in bookstores I felt a new freedom and liberty to just have at it with books. I could take them home to read at night and return them to the shelves the next day. The poetry sections were always neglected, going back to my first bookstore job and at each job after that. People came to know me as the guy who read poetry and could recommend it. There’s a certain degree of intimidation with poetry. But given my experience, I wasn’t intimidated.

Why weren’t you intimidated?
To an extent I have always approached poetry like the village idiot; I don’t need permission to read poetry and I’ve never felt that it is elitist. It feels natural to me. Other people in the bookstores probably came to it with a different experience, where poetry was a secret code that needed to be figured out.

Like everyone in my Jesuit high school, I had to memorize poetry. But I was into punk rock, and around the same time, my mom—who was more of a free spirit—gave me my first two poetry books of my own: the collected e. e. cummings and Lawrence Ferlinghetti’s A Coney Island of the Mind. I discovered another way of expression that was not only okay but celebrated. As I read more broadly, and the bookstores encouraged me to know what was out there, I dove into it.

Was there a particular reason you mom gave you those books specifically?
Because she had them on her shelf. [Laughs.]

She was a reader of poetry?
Yes, but not much. She went blind when I was ten years old, and I’ve never asked her how much poetry she read when she was younger. She’s still a reader—she listens to books—but it’s all prose. The programs that provide books for the blind don’t carry much poetry.

During the late sixties, my mom started getting a different consciousness and exploring new things. My dad was a very conservative Catholic. A year or two before the divorce, my mom started inviting friends—I’ll call them hippie priests—into our living room to conduct Mass with guitars and Kumbaya. She had a little bit of a rebellion going on, and some of that may have been expressed in poetry.

She was probably responding to my own rebellions too. I remember trying to sell her on some kind of teenage bullshit—that punk rock was so philosophical. She’d say, “That’s not philosophy.” When I would turn to books like Stephen King, she’d say, “No, you don’t want to read that,” and give me something else. There was rebellion and snobbery, encouragement and redirection.

Where did you go to college?
I’m just your basic BA, pretty much self-taught. I went to Kalamazoo College, a small liberal arts school. From my Jesuit and college educations I learned good critical skills, but the bookstores were where the doors blew open and I read and read and read.

How did you get from Kalamazoo to the Twin Cities?
I lived with my mom in St. Louis for a spell. Then, when the constant audio books drove me crazy, I moved to Boston and worked in a bookstore there, barely making rent. My plan had been to save up to travel more overseas, but I decided instead to head across the country in the opposite direction. I had an old 1968 Volkswagen bus that I had bought in Kalamazoo when I was brewing beer.

Please tell me you had a name for it.
Um, yes I did. Uncle Henry. [Laughs.] After I left Boston, it broke down in Minneapolis. I had an old friend from Kalamazoo there; I crashed at her place, slept on her couch, and got a job at the local bookstore. I got the van fixed but never left. A couple winters later, the van wouldn’t start because of the snow, and I had already spent too much on parking tickets, so I walked into the bookstore and said, “There’s a free VW van to whomever can move it within the next two hours before the plows come.” One of my coworkers raced out and kept it going for another two years.

I had actually been heading to Seattle. These were the early grunge days. I’ve always been somewhat motivated by music, and I wanted to go be a part of the scene. Minneapolis ended up being a six- or seven-year detour on my way.

That sounds like a joke—you drove in, broke down, and decided to stay.
Yeah, and I loved it.

Eventually, a colleague from a Minneapolis bookstore got a job at a local newspaper and hired me to write book reviews, and that led to writing for a couple of other papers in town. One of those early reviews was of Hayden Carruth’s Collected Shorter Poems, which is still the touchstone book for me. He’s my poet, the one who drew me to Copper Canyon. That book won the National Book Critics Circle Award, was a finalist for the National Book Award, and I fell in love with it. I wrote a glowing review that led the people at Copper Canyon to know me.

Then, when I worked at Coffee House Press, we shared distributors and Copper Canyon’s managing editor and I would correspond. She recommended me to the board of directors when she left. That’s how I got here back in 1993. When the job came up, they flew me out on a beautiful day. I walked down the dock that goes out over the water here, looked out at Mount Baker, and said, “Hell yeah, I want this.”

Tell me about your time at Coffee House Press.
I loved working there and learned a lot from Allan Kornblum. My title when I started may have been editorial assistant, but I was really an administrative assistant. Then, as the slush pile grew it became mine to manage, so I hired volunteer readers and interns to get the work read. I started editing and copyediting, and became associate editor before I left. I was able to grow my editorial role there because it was more than a single individual can do. In a lot of ways this job is bigger than any of us. There’s always an opportunity to do more, to do better. Isn’t publishing, after all, about making public?

I’m sure there are things now that fall through the cracks, and I hope they are recognized and picked up as opportunities by interns and other editorial staff. Even though I want to do it all, and I am a bit megalomaniacal in that way, there are things that are going to fall off my desk. We need more intelligence, certainly, than my own to keep track of it all.

When you moved to Copper Canyon, what did your job entail?
When I started as the managing editor, it was just Sam Hamill and me. We hired a former intern as the office manager and assistant. I was doing bookkeeping on little notepads and marketing and publicity and production. Over many years my position evolved into executive editor and then to editor in chief. Three years ago we hired Tonaya Craft as managing editor, and her primary job is running production—being the conduit for our designers, copyeditors, authors, proofreaders, and me. She keeps the trains moving on time. Increasingly she’s doing some hands-on editing herself.

Back in 1993, how many books did Copper Canyon publish a year?
The first year I was here, we published four books. When Sam left in 2004 we were doing about fourteen, and now we’re up to about twenty.

Are you still looking to increase the number of books you publish?
I always want to publish more books. At heart I want to say no less and yes more often. Over many years you want to continue to commit to the people you’ve published in the past, but you also have to bring in new voices. But without publishing more books, people have to start dying or they have to stop writing. I hope neither of those things happen, because many of our poets are dear friends and close confidants. My impulse has been to support their work as best, and as reliably, as I can. So that has necessitated adding more books. When I sign on a new author, I’m looking at that book first and foremost. But I’m also looking at the author and the longer tail.