A Slender Hope: A Profile of Chimamanda Ngozi Adichie

Chimamanda Ngozi Adichie received the call on her thirty-first birthday, last September. She was taking a bath at her sister’s house in Lagos, preparing to go to dinner, when her brother told her she had an important call from Chicago. Wrapped in a towel, she grabbed the phone through a barely open door and heard from the MacArthur Foundation that she’d received one of its five-hundred-thousand-dollar fellowships, known as genius grants. With that call, Adichie joined a diverse group of scientists, artists, humanists, teachers, and entrepreneurs, as well as writers—company that still amazes her: “Half the time I think I shouldn’t be there. When I was in Lagos, anytime something happened, like the TV wouldn’t work, my friends would ask, ‘Well, what does the genius think?’” 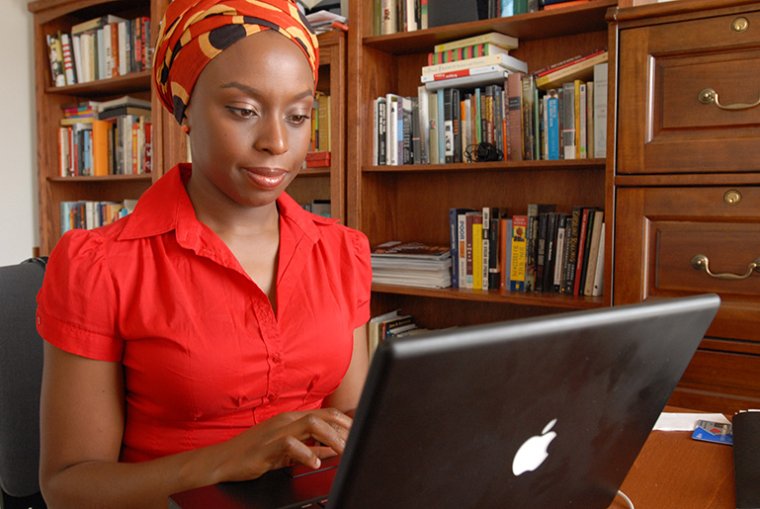 Although she was shocked at receiving a MacArthur, Adichie should have been used to hearing such news. Her debut novel, Purple Hibiscus (Algonquin Books, 2003), a coming-of-age story about a Nigerian girl who must endure the cruelty of her evangelist father, was long-listed for the Booker Prize, short-listed for the Orange Prize, and won both the Hurston/Wright Legacy Award and the Commonwealth Writers’ Prize. Three years later, her follow-up novel, Half of a Yellow Sun (Knopf, 2006), a story set in Nigeria during the Biafran War in the late 1960s, won the Orange Broadband Prize and was a finalist for the National Book Critics Circle Award. More than that, its publication marked her arrival as one of Nigeria’s most important voices.

Recently she returned to the United States, where she lives part time, to promote her June release, The Thing Around Your Neck (Knopf), a collection of short stories, some originally published in magazines such as the New Yorker, Granta, the Virginia Quarterly Review, and Zoetrope. She had been on tour in England, Scandinavia, New Zealand, Australia, and Canada for the book’s overseas publication earlier this year. Accustomed to being in transit, she divides her time between Nigeria and Maryland, where she lives with her partner, a family physician, who practices there. “I’m so emotionally invested in Nigeria as a country and society, which I feel has so much potential it hasn’t lived up to, that sometimes it gets exhausting. There’s so much to do, and I want to be involved. But then I find I need to leave to have some space. I quite like America, my home of convenience, where I don’t have to deal with things like electricity shortages.”

Adichie grew up piecing together “tiny stories,” as she describes them, about the Biafran War, which raged from 1967 to 1970 and ended almost a decade before she was born. The conflict resulted from ethnic tensions among the Christian Igbo population in eastern Nigeria, which seceded to form the Republic of Biafra, and the largely Muslim Fulani-Hausa in the north. At least a million people, mostly Igbo, died from massacres and starvation during this brutally violent period, though some estimates put that figure as high as three million. Both of Adichie’s Igbo grandfathers died as refugees who had to flee their hometowns. Her grandmothers survived and, as she says, “somehow kept children and relatives together. My parents, part of the postindependent [Nigeria gained independence from the United Kingdom in 1960], hopeful middle class when the war started, lost most of their property”—in addition to family and friends.

Her parents rebuilt their lives and raised a family of six children. Her father was professor of statistics at the University of Nigeria, Nsukka, where he was appointed vice-chancellor in 1982, and her mother became the first woman registrar. The fifth of the six children, Adichie grew up speaking both Igbo and English. She recalls the thrill of reading Chinua Achebe’s Things Fall Apart, the groundbreaking novel about the clash between Igbo tradition and British colonialism, when she was ten years old. “I realized that people who looked like me could live in books.” But her parents encouraged her to pursue a practical career, so writing had to wait.

She began studying to be a doctor in Nigeria but, urged by her sister Ijeoma, came to the United States on a scholarship to Drexel University, in Philadelphia. She transferred to Eastern Connecticut State University, in Willimantic, where she lived with her sister and her sister’s husband, and took care of their son while they started a medical practice. During that time, she wrote Purple Hibiscus, reworking it during her tenure as an MFA student at Johns Hopkins University, in Baltimore.

Set around the mid-1990s, when Nigeria was under the control of a junta led by General Sani Abacha, Purple Hibiscus is narrated by fifteen-year-old Kambili Achike, whose father, Eugene, is both a courageous champion of human rights and a religious zealot who terrorizes his wife and children. Kambili, though desperate for her father’s approval, cannot measure up to his impossibly high standards: “I needed him to hug me close and say that to whom much is given, much is also expected. I needed him to smile at me, in that way that lit up his face, that warmed something inside me. But I had come second. I was stained by failure.” After a military coup, Eugene sends his children to stay with their Aunty Ifeoma, an outspoken university teacher, who introduces Kambili to “a different kind of freedom,” including traditional religious beliefs and more humane and expansive relationships. Even in this debut novel, Adichie depicts characters whose personal lives are played out on the larger canvas of a society beset by corruption and violence.

Moving back in time, Half of a Yellow Sun takes its title from the flag of the doomed Republic of Biafra and tells the story of the civil war from three interconnected perspectives. The main characters move back and forth between the earlier more peaceful part of the decade and the bloodshed that ended the 1960s. Adichie, who spent four years researching and writing the novel, tells the political saga through the lives of well-to-do twin sisters Kainene and Olanna, the urbane, intellectual Odenigbo, and the white British journalist Richard as their comfortable lives unravel into a struggle for survival. At the center of the novel is Ugwu, a thirteen-year-old who comes from a poor rural village to work as Odenigbo’s houseboy and is eventually conscripted into the Biafran army. Reviewers praised the novel for its epic scope. Rob Nixon, writing in the New York Times, lauded Adichie for positioning “her characters at crossroads where public and private allegiances threaten to collide.”

Adichie says she always knew she would write a novel about Biafra. At sixteen, she wrote what she describes as “an awfully melodramatic play” called “For Love of Biafra,” and earlier in her career, she wrote short stories that dealt with the war. In “Ghosts,” one of the stories in The Thing Around Your Neck, she revisits this time period with a meeting between a seventy-one-year-old mathematics professor retired from the University of Nigeria and a colleague, who was assumed to have died as a result of the 1967 violence but had, in fact, been living in exile. Adichie says this story is “in some ways a love letter to my father,” and the tenderness of that tribute comes through in the professor’s reflections on his past:

We hardly talked about the war. When we did, it was with an implacable vagueness, as if what mattered were not that we had crouched in muddy bunkers during air raids after which we buried corpses with bits of pink on their charred skin, not that we had eaten cassava peels and watched our children’s bellies swell from malnutrition, but that we had survived. It was a tacit agreement among all of us, the survivors of Biafra.

That period has remained a powerful political issue in Nigerian society, but Adichie felt that the conversation about it retained “an implacable vagueness” and was largely uninformed, particularly for her generation. Half of a Yellow Sun, which was well received in Nigeria, changed that to some extent. “I often get feedback from friends, from friends of friends, about how the novel has become a starting point for talking about the war. My Nigerian publisher told me about a family in Lagos—the man is a newspaper publisher. Their daughter read the book and asked her mother about the war. To the husband’s surprise, she began to tell their daughter stories of what her family went through—yet he had never heard these in all the years of their marriage.”