A Slender Hope: A Profile of Chimamanda Ngozi Adichie

In a 2007 article, Vanity Fair featured Adichie—along with Doreen Baingana, Uzodinma Iweala, and Helon Habila—as part of the new generation of young writers leading an African literary renaissance. The piece described Adichie at a literary festival in Nairobi, looking “radiant, fresh off her rock-star-style tour of Nigeria and splashy New Yorker debut…part[ing] the crowds, Cleopatra-style” and hailed her as the heir to her countryman Achebe, whose Things Fall Apart celebrated in 2008 fifty years of continued popularity and influence. 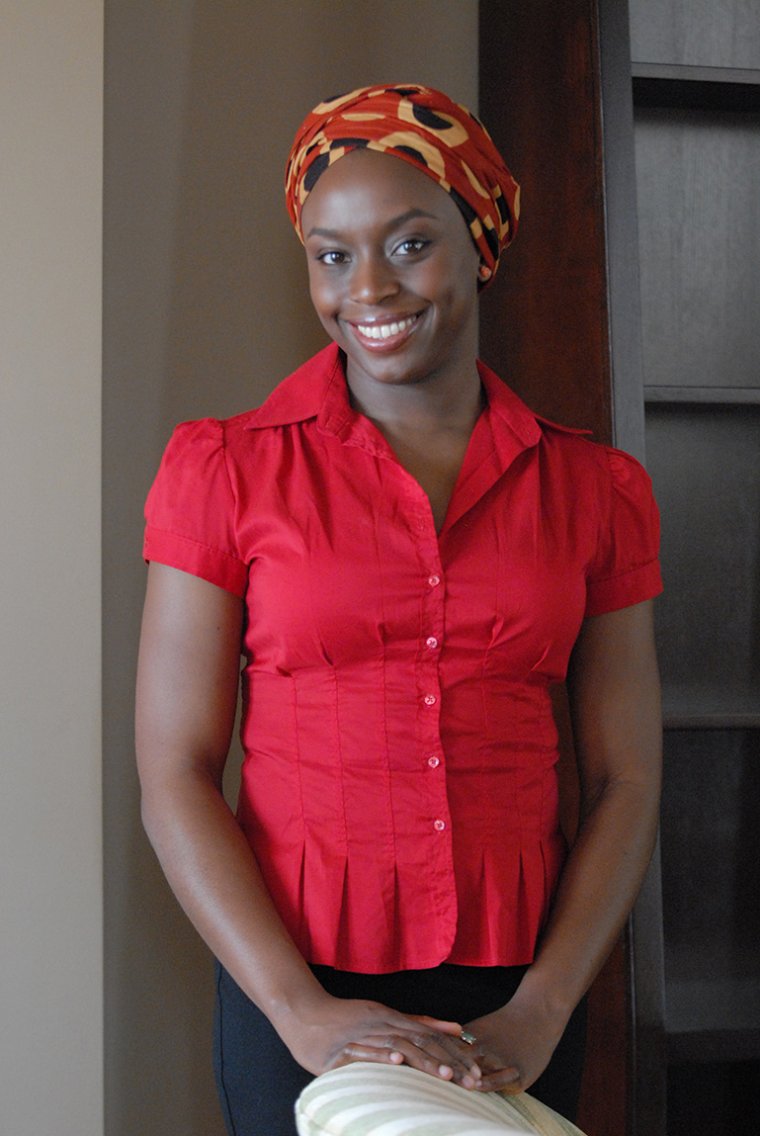 Adichie says Achebe is her hero and guiding literary spirit. While there is remarkable variety in the work being written by the Nigerian authors in her generation, Adichie believes they all share a certain freedom that was forged by Achebe’s writing. “When Achebe published Things Fall Apart in 1958, it was a novelty,” she says. “There may have been five other African writers writing in English. I can’t imagine what it must have been like for people like him, feeling they had this burden of responsibility, of being a pioneer, thinking, ‘the dignity of my people rests on my shoulders.’ I don’t have that burden. I’m not representing anyone—and I owe this freedom to that generation.”

Most of the twelve stories in The Thing Around Your Neck focus on contemporary situations, whether the setting is Nigeria or the United States. They explore the subjects of immigration and exile, shifting values, and cross-cultural communication among families and communities. In “A Private Experience,” two Nigerian women—one a privileged Igbo student who is visiting her aunt while on holiday from her medical studies, the other a poor Hausa trader from the marketplace—find themselves hiding together during a violent riot provoked by a man who drives over a copy of the Koran that had dropped on the street. Based on an actual incident in northern Nigeria, the story explores the brief intersection of these women’s lives during a dramatic moment that links them regardless of their tribal, religious, economic, and educational differences. “Sometimes we like to say we’re really not different,” says Adichie. “I think we are, yet what interests me is that we still can make connections.”

“Cell One,” one of two stories previously published in the New Yorker, depicts a well-off family whose son, Nnamabia, is a member of a gang whose members “had mastered the swagger of American rap videos [and] were undergoing secret and strange initiations that sometimes left one or two of them dead.” Nnamabia, the spoiled brother of the female narrator, is arrested after a gang shooting. Although it is unclear whether he is guilty, in prison he experiences the corruption of the prison guards and finally confronts his own selfish and irresponsible behavior when he speaks up for another inmate who is being brutalized by them. At the story’s end, he seems deeply changed, but can he sustain this transformation? “I believe in redemption,” Adichie says quietly, then adds, “I’m very suspicious of excessive happiness. The way the world works is a struggle, but I believe in hope—in slender hope.”

In many of these stories, hope seems in scarce supply when it comes to marriage. The wife in “Imitation” tries to take in, via long distance, the news that her husband’s mistress has moved into their home in Lagos while she waits for him in their affluent home on Cherrywood Lane in suburban Pennsylvania. In “The Arrangers of Marriage,” a new wife resists changing her name
from Chinaza to the Americanized Agatha, only one demand made by her husband in an effort to speed up her assimilation—and acceptability. Patriarchal attitudes seem to dominate, regardless of the Nigerian or American setting, as an expression of the imbalance of power, particularly when sex is part of the bargain.

“I’ve always had a problem with marriage as an institution,” says Adichie. “The way it’s set up, women automatically make more compromises than men.” Despite the inspiring model of her parents’ forty-five-year marriage, she gets angry at the way our society makes a fetish of marriage. “Undue privilege is awarded to married people in so many ways. I’m all for partnerships as long as they’re mutually beneficial, satisfying, respectful. I’m part of a couple and I’m quite happy, but I also think I could be quite happy if I were not part of a couple. In Nigeria, sometimes women act as if their lives are complete because they’re married—and it’s just not true. Maybe it’s the feminist in me, but I see the lies that people tell themselves about marriage and think how unwilling we are to admit that it’s not always a perfect thing.”

Although the subject is different, a similar fierceness fuels the story “Jumping Monkey Hill,” whose title refers to the name of a resort, where an aging British intellectual and his wife lead an African writers workshop. As two narratives unfold—the third-person narrative that describes the workshop and the story that the Nigerian participant Ujunwa Ogundu is writing—so does a brutal indictment of postcolonial paternalism. In the final scene, the pompous academic dismisses Ogundu’s story, saying, “This is agenda writing, it isn’t a story of real people.”

“That is the one story propelled by rage,” Adichie says. “I’m not interested in writing about myself, but that one is personally based on what really did happen to me. I felt diminished.” In fact, she had to change her thinly disguised portrayal of the workshop leader before Granta would publish it because of fear of a lawsuit. She still makes no apology for the unflattering depiction: “For me it’s about who is policing the production of literature, who is saying what is acceptable, especially for Africans. If someone tries to tell you what your own story should be, that’s ridiculous.”

Adichie takes her commitment to authentic storytelling well beyond her own writing. Along with her efforts to promote literacy in Nigeria, for the past two years she has led workshops in Lagos for aspiring writers. In 2007, when Fidelity Bank invited her to give a reading, she agreed but said she wanted to do more for the community. She proposed a series of workshops “to help writers polish their craft, to give them a chance to be with other writers, to demystify the publishing process—and hopefully to get them comfortable with the idea of being read by others.” The first workshop was advertised with no requirement other than a brief writing sample—and over two hundred applied. Adichie chose twenty-five participants and had enough success that the bank agreed to expand the project. In 2008, applicants exceeded seven hundred, mostly from Nigeria but a few from Cameroon and Zimbabwe. Dave Eggers from the United States, Binyavanga Wainaina from Kenya, and Marie-Elena John from Antigua joined her as guest faculty serving a group ranging in age from eighteen to fifty. “Friendships formed. People exchanged books and stories. One person from the first summer ended up at the Iowa Writers’ Workshop, another just published his first novel in Nigeria,” Adichie says. “Some participants formed Web groups where they continue to read and support one another. So I like to think that their writing lives are better, in general, because of the workshop.”

Nigerian Breweries has signed on as sponsor for the next three years, and this September Eggers will return along with other international writers. The workshops received wide media notice, and the accompanying literary events during the evenings drew substantial crowds. Adichie says the attention has been both “moving and humbling” but also useful. “Being known has given me a platform to talk about the things I care about, which is an incredible luxury.” For Adichie, success has meant more than making a name for herself as an author. It has given her the ability to see her slender hope realized in the lives of her fellow Nigerians—and to see the rest of us inspired by her work.

Renée H. Shea, professor of English and modern languages at Bowie State University in Maryland, has written profiles of Andrea Levy, Rita Dove, and Sandra Cisneros, among others, for Poets & Writers Magazine. She is coauthor of the book The Language of Composition: Reading, Writing, Rhetoric (Bedford/St. Martin’s Press, 2007).