A Lending Library of Joy, Storytelling

Nestled into a block with a dance studio and a tax-services business in El Monte, California, Matilija Lending Library greets visitors with a sign in the window announcing its name in English, Spanish, and Chinese. There’s also a poster with the dictum “Protect Our Elders” and another that reads “This Is Tongva Land,” referring to the Indigenous people who have long inhabited the region. Inside, bright yellow and exposed-brick walls frame shelves of books. Colorful papel picado flutters overhead, and a vintage typewriter sits on a side table. 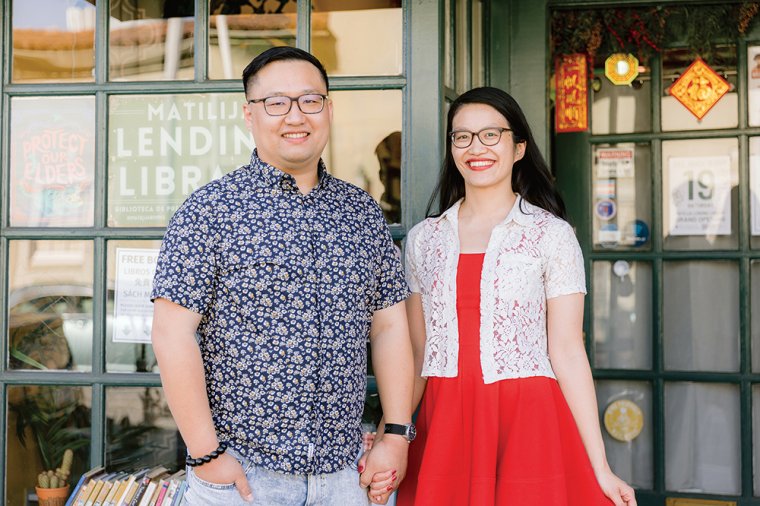 The decor’s nod to a wealth of cultures reflects the mission of Amy J. Wong and Andrew Fung Yip, the couple who opened the lending library to the public in March. Named after the Matilija poppy—a California-native plant that flowers in fire-ravaged landscapes—the library aims to “reflect our people of color communities in the San Gabriel Valley, and build multiracial solidarity.” Boasting a collection of more than 1,500 books by mainly BIPOC authors, Matilija allows patrons to check out three volumes for four weeks at a time. Recently displayed titles have included Chiang Yee’s The Silent Traveller in Boston, Nguyen Phan Que Mai’s The Mountains Sing, and Nikole Hannah-Jones’s The 1619 Project: A New Origin Story. Guests can also congregate in the space during the library’s hours of operation on Thursdays, Fridays, and Saturdays. At a time when people of color are struggling under the weight of increasing racist and anti-immigrant violence nationwide, Matilija functions as a sanctuary as well as a lending library.

The Matilija Lending Library is the culmination of a dream Wong and Yip shared. Initially they hoped to open a shop focused on books by BIPOC writers. But some of the hurdles to owning a bookstore, such as purchasing inventory—plus the duo’s desire to create a free space—shifted their focus.

To prepare for launching Matilija, Wong and Yip visited other California grassroots libraries—including Libros Schmibros in L.A.’s Boyle Heights and Café con Libros in Pomona—taking notes on how they functioned. They found space in a former shoe-repair shop on Lexington Avenue, owned by a friend. The two received the keys in December 2021 and started prepping to open. Since then, monetary donations have paid for utilities and books, both used and new. Wong and Yip purchased furniture from thrift shops—including long church pews repurposed as benches—which they hoped would invite folks to sit a while.

The couple manage the library themselves, a labor of love they do in addition to their full-time jobs at Active San Gabriel Valley (ActiveSGV), whose mission is “to support a more sustainable, equitable, and livable San Gabriel Valley.” The lending library has become an extension of Wong and Yip’s identities as lifelong residents of the region, a second home where they welcome chatter and even music from a record player in the space.

“This library is a small step toward…the future that we want to see in the San Gabriel Valley, where the voices and the stories of people of color are centered,” says Wong.

Christine Tran, multimedia storyteller and executive director of the Los Angeles Food Policy Council, sees Matilija as an important gathering place in El Monte, one that reflects the “really deep history” between the area’s large Latinx and Asian communities. It is also uniquely inclusive. Public libraries require borrowers to be at least eighteen years old and Los Angeles County residents before they can apply for an official library card on their own. Matilija, on the other hand, offers easier access as well as a direct line to the community. For example, the library has posted polls on social media asking patrons to suggest programming, leading to planned movie screenings, a mah-jongg workshop, and karaoke. Matilija also collaborates with community groups, including South El Monte Arts Posse (SEMAP) and ActiveSGV, which recently held a poetry reading in the library that Tran participated in.

“We are a community of storytellers and story listeners,” says Tran, who grew up in the San Gabriel Valley. “And it’s really hard to find space for that level of intergenerational and historical connection.”

Certain moments stand out in Wong’s memory as illustrative of the library’s success in supporting BIPOC readers. A visitor once told Wong that she hoped Matilija would encourage her daughter’s appreciation of her Chinese and Mexican roots. On another day, Wong looked on fondly as a father and his two daughters plucked books from the shelves and sat down to read as jazz played in the background.

“It’s those moments of peace and quiet affirmations that bring me joy and allow me to see that these spaces are important,” Wong says. “We wanted a space to center joy and to center storytelling and positive aspects of our lives here.”

Eva Recinos is a journalist and creative nonfiction writer based in Los Angeles. Her writing has appeared in Air/Light, Electric Literature, and Pank, among other publications.

A Place Built by Poets for Poets
by Jessica Kashiwabara | News and Trends 12.15.21

After collecting poetry books to lend to students, poet and educator Hiram Sims opened the Sims Poetry Library in Los Angeles. Today the library boasts a collection of over six thousand books and serves as a home base for poets in the community...

The Impact Library Program, an initiative of the nonprofit Little Free Library, brings free miniature libraries to communities where books are scarce to encourage a love of reading and improve literacy across the country.