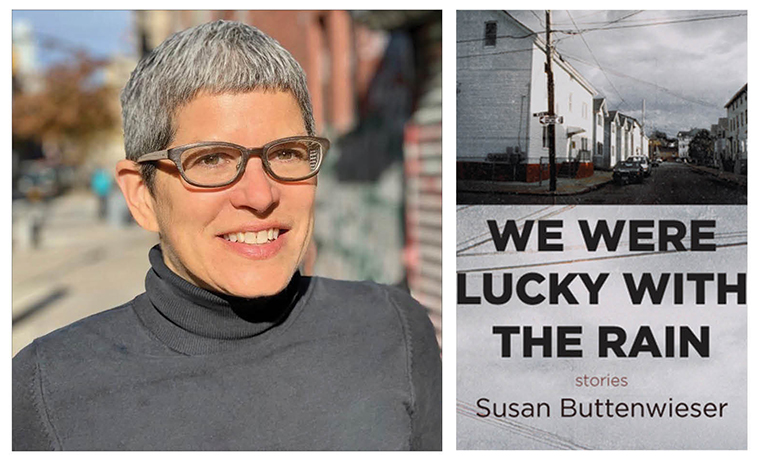 Susan Buttenwieser, author of We Were Lucky With the Rain, published in September by Four Way Books. (Credit: Keith Summa)

We Were Lucky With the Rain

Lacey can’t resist spying on her parents when they fight. Which happens whenever her mother has disappeared for a few hours or, occasionally, the entire evening. Lacey lies flat on the wooden floor of their upstairs hallway, peering through the banister at her parents, who are yelling at each other in the living room below.

Her father wants to know where her mother has been and why she never picked up Lacey from her piano lesson this afternoon, or her younger sister, Eileen, after school.

“I told you this morning that I was going to this Mom lunch thing at Hoolihan’s. So I was late, okay?” Lacey’s mother throws her purse onto the floor. Only her legs are visible underneath a red dress, as she roams around the living room. She bumps into the coffee table, left ankle buckling.

“You weren’t late, you didn’t show up. You didn’t answer your phone. We had no idea where you were. And now you’re a complete mess.” Her father’s voice goes up an octave. “You could have killed someone, you know.”

Her mother starts laughing. “Jesus, relax. I took a cab.”

“Then where is the car, goddamn it?”

If Lacey tilts her head a certain way, she can see her father’s slippers pacing back and forth. She strokes her fraying rope bracelet that she got at her school’s Fall Festival. Her fingers always work their way to its soft underside whenever she’s waiting for her turn to bat for her softball team or perform in a piano recital.

“The car is fine, all right?” her mother says. “I left it in the parking lot at that Star Market by Hoolihan’s.”

“It’s not fine. It won’t be fine. You can’t leave the car there overnight. It’s going to get towed!” Her father’s slippers stop moving. Then he stomps his left foot on the floor and throws a sofa cushion out into the hallway. A table lamp crashes to the floor and her mother shouts at him to Stop it, just stop it.

Lacey can’t understand how Eileen always sleeps through their parents’ arguments, which often involve things being broken. A few weeks ago, her mother hurled a bottle of red wine against the front door. Another time it was plates. She’s also thrown glasses, shoes, and once a dining room chair. But her father always cleans it all up, and in the morning, there is never a trace of the mess, not even one thing out of place anywhere.

Every Friday, Lacey’s mother picks her up after her piano lesson at 4:30. But this afternoon, 4:30 came and went, then it was 5:00. Lacey waited for her mother through the next lesson, and the one after that. Her mother never came.

Lacey sat out in the hallway on a bench, her back pressed up against the wall. The lessons were in the living room and Lacey could hear the metronome and Mrs. Szabo counting, “one and two and one and two,” fumbling scales going up and down the piano. The hallway’s striped yellow wallpaper was covered with faded photographs. It smelled of old furniture and rugs, mold and dust, like Lacey’s basement. She pulled out her notebook to work on a sketch of the teacher she’d started during math class. He wore suits with purple basketball sneakers and was known for throwing chalk at anyone not listening.

“Still no mother?” Mrs. Szabo said when all the lessons were finished for the day and then asked if Lacey wanted to call her. Her mother’s phone went straight to voice mail, so Lacey returned to the hallway bench while her teacher started dinner. The black baby grand was shoved in a corner of the living room. During the lessons, Mrs. Szabo always sat next to Lacey on a folding chair, making sure her hands didn’t slouch onto the keys, that she sat up straight, back like a board, shoulders down. Lacey hadn’t practiced very much during the week -- one piece she didn’t work on at all -- and Mrs. Szabo was annoyed with her. “You’re not trying. Put some porridge into your playing,” she’d said, wiping her nose on the ball of Kleenex that was always tucked inside her sweater. There was going to be a recital in three weeks and Lacey wasn’t close to being ready. Usually she received stars on all her pieces, but this week she got none.

By the time Mr. Szabo got home, the hallway had become a mixture of smells, sautéing garlic, grilled chicken, and damp basement. Lacey could hear them discussing her in the kitchen, sometimes slipping into another language. “They’re survivors, honey,” Lacey’s mother would say in a hushed voice whenever Eileen wanted to know why they “talked so funny.”

“Mister will give you a ride home,” Mrs. Szabo came out to the hallway. “You must practice an extra half hour each day this week.”

As he drove, Mr. Szabo leaned way over the steering wheel and waited a long time at intersections to make sure nothing was coming. Cars honked at every traffic light, and Lacey hoped they wouldn’t see anyone from school. “Missus tells me you are a good piano player,” he said when they finally arrived at her house.

Lacey let herself in through the kitchen door and went through the dark house turning on all the lights downstairs. She sat in the window seat of their breakfast nook and pulled out her notebook and finished the sketch of her math teacher. The stove clock flipped over numbers and an occasional car drove by.

After a while, her father’s Jeep Cherokee turned into the driveway, Neil Young blasting out of the open windows. When Lacey’s father came through the door, he was singing to himself, but stopped abruptly at the sight of Lacey alone and the absence of dinner.

“Where’s Mom?” He pushed his glasses back onto the bridge of his nose.

“Didn’t you have your piano lesson today?”

“Did your mother pick you up?”

Lacey shook her head. He stood in the middle of the kitchen, running his hands through his starting-to-gray curly hair, which could never seem to find a comfortable place on his head. “What about Eileen?” he asked. “She’s not home either?”

“Nope.” Lacey was starving, but her father would be distracted trying to find Eileen and her mother. Dinner wasn’t going to happen as usual when Lacey’s mother disappeared.