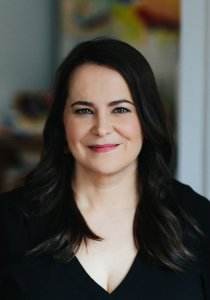 Poet and essayist KC Trommer is the author of We Call Them Beautiful (Diode Editions, 2019) as well as the chapbook The Hasp Tongue (dancing girl press, 2014).

A graduate of the MFA program at The University of Michigan, Ann Arbor, KC has been the recipient of an Academy of American Poets Prize and has been nominated for a Pushcart Prize. Her poem "Fear Not, Mary" won the 2015 Fugue Poetry Prize, judged by Kevin Prufer.

Her poems have appeared in AGNI, The Antioch Review, Blackbird, The Common, Diode, LitHub, The Sycamore Review, Poetry Daily, Prairie Schooner, Poetry East, as well as in the anthologies Resist Much, Obey Little; All We Can Hold; Bared; and Who Will Speak for America? Her essays have appeared in VIDA Review, LitHub, and in the anthology Oh, Baby! True Stories About Conception, Adoption, Surrogacy, Pregnancy, Labor, and Love, (Creative Nonfiction, 2015).

She has been awarded grants and fellowships from the Queens Council on the Arts, the Table 4 Writers Foundation, the Center for Book Arts, the Vermont Studio Center, the Haystack Mountain School of Crafts, and the Prague Summer Program.

In 2017, the Grammy Award-winning composer Herschel Garfein created the song cycle “Three Rides” for soprano, cello, and piano from her work. The first of the songs, “The Cyclone,” had its world premiere in New York as a part of the 2017 Five Boroughs Music Festival’s Five Borough Song Book, Volume II.

KC studied collage and painting at the Nova Scotia College of Art and Design, School for Visual Arts, and Parsons. Her collage work has been featured in group and solo shows in Ann Arbor and New York City. She is the Assistant Director of Communications at NYU Gallatin and lives in Jackson Heights, Queens, with her son.

2012 “We Leg It Up the Hillside to Kill My Darlings,” Finalist, Gigantic Sequins First Annual Poetry Contest, judged by Nick Flynn

QUEENSBOUND - a poetry project on the 7 train

Gives readings:
Yes
Travels for readings:
Yes
Identifies as:
White
Prefers to work with:
Any
Fluent in:
French
Born in:
Crossville, TN
Tennessee
Raised in:
Bangor, ME
Maine
Please note: All information in the Directory is provided by the listed writers or their representatives.
Last update: Sep 10, 2019
X