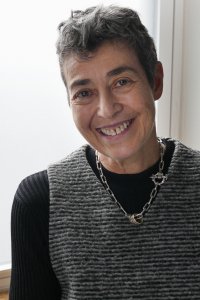 HELEN FREMONT, a lawyer and writer, was raised Roman Catholic by her Eastern European emigre parents.  It was not until she was thirty-five that she discovered that her parents were, in fact, Jewish Holocaust survivors.  The story of her parents’ survival of the Soviet and Nazi occupations, as well as her own efforts to piece together her family’s hidden identity is recorded in her memoir, After Long Silence, published by Delacorte in 1999 (now available from Penguin Random House).  A national bestseller and Featured Alternate of the Book of the Month Club, the book has been published in England and Germany.

Her critically acclaimed new memoir, The Escape Artist, was recommended as a New York Times “Editor’s Choice” new book in 2020.  It has also been named one of the best new books by People Magazine in February, 2020, and BookPage named is one of the 25 most anticipated books of 2020.

Helen is a graduate of Wellesley College, Boston University Law School, and the Warren Wilson MFA Program for Writers.  She has been an attorney with the Massachusetts public defender agency since 1985, and was a consultant with the U.S. Justice Department.  She was also a Resident Scholar at the Brandeis University Women’s Studies Scholars Program, a fiction editor of the Marlboro Review, and has taught at Harvard University, Emerson College, and the Radcliffe Institute for Advanced Studies. She was awarded a fellowship at the Bread Loaf Writers’ Conference and was selected the Common Book Author by Otterbein College in Columbus, Ohio.  Her fiction and essays have appeared in Prize Stories: The O. Henry Awards, Ploughshares, Harvard Review, and Lilith, among other publications.

Helen lives in Boston with her wife, Donna, their giant mutt, Roshi (a rescued Houston Street Dog) and Louie, the cat who deigns to live with them.  An avid rower and outdoorswoman, Helen can be found most mornings before dawn rowing on the Charles River, or working out at the Y.  She co-hosts The Unauthorized Eleanor Wilner Reading Series for Friends of Writers, Inc.

Helen is available for speaking events and workshops.

Gives readings:
Yes
Travels for readings:
Yes
Identifies as:
Jewish, LGBTQ
Prefers to work with:
Any
Fluent in:
English
Born in:
NY
New York
Raised in:
Upstate New York, NY
New York
Please note: All information in the Directory is provided by the listed writers or their representatives.
Last update: Apr 07, 2020
X