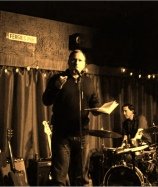 Ernest Hilbert’s debut poetry collection Sixty Sonnets (2009) was described by X.J. Kennedy as “maybe the most arresting sequence we have had since John Berryman checked out of America.” His second collection, All of You on the Good Earth (2013), has been hailed as a “wonder of a book,” “original and essential,” an example of “sheer mastery of poetic form,” containing “some of the most elegant poems in American literature since the loss of Anthony Hecht.” His third collection, Caligulan (2015), has been called “brutal yet beautiful,” defined by “pleasure, clarity, and discipline,” “tough-minded and precise,” filled with a “stern, witty, and often poignant music,” “a page-turner in a way most poetry books can never be.”

Hilbert supplies opera libretti and song lyrics for contemporary composers Stella Sung, Daniel Felsenfeld, and Christopher LaRosa, as well as scripts for the post-punk conceptual band Mercury Radio Theater. Hilbert is as a senior specialist at Bauman Rare Books in Philadelphia, where he lives with his wife, Keeper of the Mediterranean Section at the University of Pennsylvania Museum of Archaeology and Anthropology, and their son. He is also the poetry concentration director for the World of Versecraft Low-Residency MFA program at Western State University of Colorado.

What I'm reading now:
The Bookshop by Penelope Fitzgerald, History of English Prosody by George Saintsbury, A Few Green Leaves by Barbara Pym, Yellowdog by Martin Amis, The Forever War by Joe Haldeman

Gives readings:
Yes
Travels for readings:
Yes
Identifies as:
White
Prefers to work with:
Any
Fluent in:
English
Born in:
.
Raised in:
., NY
New York
Please note: All information in the Directory is provided by the listed writers or their representatives.
Last update: Aug 02, 2018
X