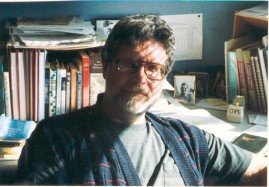 David Cope was born in Detroit and raised on the Thornapple River in Western Michigan; married 48 years, he has three grown children and is an avid gardener, bicyclist, and kayaker. Cope worked 18 years as a school custodian while educating himself in the poetries and traditions not then a part of his college curriculum, and began publishing his Nada Press/Big Scream magazine during those years. He is a graduate of the University of Michigan (August, 1974), and earned his MA plus 30 credits in Shakespeare, English Renaissance Drama, and Dante Studies at Western Michigan Unversity (1994). He eventually taught full time at Grand Rapids Community College, where he developed courses in Multicultural Literature, Shakespeare, and as part of a feminist group, an Introduction to Women’s Studies, also helping colleagues develop their own courses: Women’s Literature and LGBTQ Literature. During his tenure as a professor, he also developed extensive web pages in Shakespeare and Women’s Studies as resources for students.

David is author of seven books of poetry, including The Invisible Keys: New and Selected Poems. He has received a Pushcart Prize (1977), an award in literature from the American Academy/Institute of Arts and Letters (1988), and was Grand Rapids Poet Laureate (2011-2014). He is editor of three anthologies: Nada Poems (1988), Sunflowers & Locomotives: Songs for Allen (1998), and Song of the Owashtanong: Grand Rapids Poetry in the 21st Century (2013). David has continuously edited and published Big Scream for over four decades, putting over 200 poets in print. He has been a visiting poet at Naropa University on several occasions, working with Allen Ginsberg and Anne Waldman in developing lineups for the 1990 Ecopoetics Conference and the 1994 Beats and Rebel Angels Conference (1994). He has read his poems in the summer sessions with Carl Rakosi, Jack Micheline, Sharon Olds, Galway Kinnell, and Ed Sanders, shared lectures with Allen Ginsberg, and was primary author of the 1990 Declaration of Independence, a document co-edited with other conference presenters and published in Disembodied Poetics: Annals of the Jack Kerouac School, ed. Waldman and Schelling ( U of New Mexico, 1994).

Over the past several years, David’s work has been translated into Chinese by Zhang Ziqing, and the translations have appeared in the Journal of Jianghan University (Wuhan), Poetry (Beijing), and Houston Garden of Verses. His “River Rouge” is being published in RESPECT: Poems About Detroit Music, ed. M. L. Liebler (Michigan State U P, 2018). He has recently completed editing The Correspondence of David Cope and Allen Ginsberg (1976-1996), but has not yet had time to begin seeking a publisher for it.

Gives readings:
Yes
Travels for readings:
Yes
Identifies as:
European American
Prefers to work with:
Any
Fluent in:
English
Born in:
Detroit, MI
Michigan
Raised in:
Grand Rapids, MI
Michigan
Please note: All information in the Directory is provided by the listed writers or their representatives.
Last update: Nov 07, 2018
X