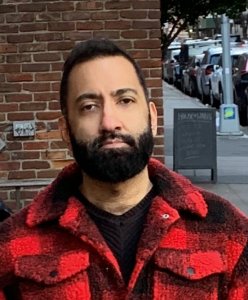 Ashok Rajamani is busy dancing among the dewdrops in the garden since hearing that his Pulitzer Prize-Luminary Commended Memoir, 'THE DAY MY BRAIN EXPLODED: A TRUE STORY' (Algonquin Books 2013), will be optioned to be a major motion picture.

Hailing from New York City, he is an author,  artist, poet, radio host, and speaker. Most importantly, he is the survivor of a catastrophic, near-fatal brain hemorrhage at the age of 25.  Though surviving, he was left with lifelong bisected blindness, epilepsy, distorted hearing, erratic transient amnesia, metal staples in his brain, and ultimately, a carved skull courtesy of open brain surgery.  The final consequence of his body's very own 9-11: his first book -- an irreverent and decidedly unconventional memoir about a day that exploded not only his brain, but the world around him, entitled THE DAY MY BRAIN EXPLODED: A TRUE STORY.

After the hemorrhage, he emerged as a proud brain injury rights advocate, becoming a board member of the International Brain Injury Survivors Network, Subject Matter Expert (SME) for the Brain Injury Association of America, and guest host on Brain Injury Radio.

Ashok is also an accomplished artist, having studied at the Art Institute of Chicago and School of Visual Arts. His artwork has been submitted and exhibited in galleries and shows such as Greenpoint Gallery, Exit Art New York, and the Pancakes & Booze shows -- the nationwide Art Pop-Up events.

Finally entering the digital age following his memoir, he decided to release other works electronically: a flash audio production, If These Saris Could Talk, and a book of literary criticism on Literature and Myth, entitled Imagine Carnivalesque: A Duo of Psychoanalytical Essays on South Asian Literature and Gender Identity.

Ashok's prose has appeared in other books/journals/magazines including: Scholars & Rogues, South Asian Review, The Opiate, Orion Headless, Catamaran, Monsters of the Rue Macabre, Armageddon Buffet, Pulp Metal Literary Magazine, and dozens more.  His poems have appeared in multiple poetry journals, including: Arcturus, Voices on the Wind,  Mad Swirl Poetry, and Clutching at Straws. He will soon be participating in the 24th edition of the prestigious 'Curtea de Arges Poetry Nights' World Poetry Festival in Romania.

Gives readings:
Yes
Travels for readings:
Yes
Identifies as:
Indian American
Prefers to work with:
Any
Born in:
Raised in:
Please note: All information in the Directory is provided by the listed writers or their representatives.
Last update: Oct 13, 2020
X