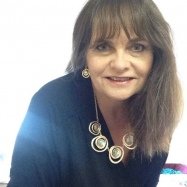 Anna Scotti is a poet, writer, and teacher living in Southern California. A former journalist, Anna has written for national and regional magazines including InStyle, People, The Los Angeles Times Traveling in Style, Bon Appetit, Los Angeles, Redbook, Good Housekeeping, YM, and Sugar. She was a foreign correspondent for WhoWeekly (Australia) and a columnist for the late, great Buzz Magazine. Anna's work appears occasionally in The New Yorker and other journals. She is the author of several pseudonymous novels, and has work upcoming in Ellery Queen Mystery Magazine and a variety of periodicals. Anna has received a number of prizes, nominations, and distinctions for her work, which has been singled out for praise by Robert Pinsky, the late Thomas Lux, Patricia Smith, Aimee Liu, Nikky Finney, James Poissant, Chris Ransick, and other notables. Much of her published work can be found at www.annakscotti.com. Anna earned an MFA in Creative Writing at Antioch University in 2007. Additional degrees, coursework and training may be seen on her website. She gives corporate presentations on writing and grammar to local businesses and teaches English and history at a French International school. Anna enjoys working with adults, teens, and children.

Gives readings:
Yes
Travels for readings:
Yes
Prefers to work with:
Any
Fluent in:
English
Please note: All information in the Directory is provided by the listed writers or their representatives.
Last update: Feb 18, 2020
X