by
Staff
News and Trends
November/December 2008

The story of Harold Louis "Doc" Humes is at once sad, fascinating, funny, and tragic. Doc, a new documentary by his daughter Immy Humes, which, to use her father's words, "puts a frame around the wreckage" of the story, will premiere on the PBS series Independent Lens on December 9. A cofounder of the Paris Review in 1953, Doc published two acclaimed novels, The Underground City (Random House, 1958), which prompted a reviewer in the New York Times to call him "alarmingly talented," and Men Die (Random House, 1959), and then the author never wrote again. Instead, he led crusades for artists' rights in the early sixties, 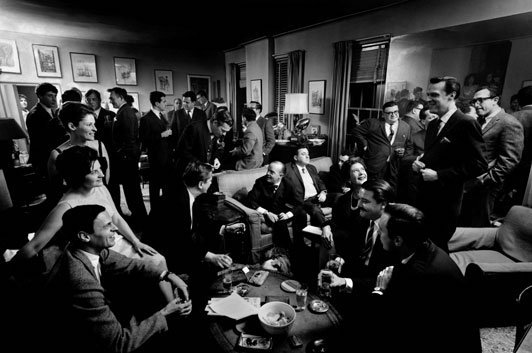 championed the use of medical marijuana, managed Norman Mailer's 1961 run for mayor of New York City, led a riot in Washington Square Park, played piano in a Harlem jazz club, shot a low-budget movie titled Don Peyote, and invented a waterproof and flame-retardant house made of paper. He was also deeply paranoid and, after taking LSD in London with his friend Timothy Leary, began suffering extreme delusions for which he was eventually hospitalized. He surfaced at

Columbia University in 1969, and, for the next twenty years, presented himself as "a hipster visionary neo-prophet," as Paul Auster described him in his memoir Hand to Mouth, on the campuses of Columbia, Princeton, Bennington, and Harvard. He died of cancer in 1992. The image above, taken from Doc, is a photograph of a party thrown in 1963 for the founding of Filmwrights International, Doc's idea for a filmmaking writers union. Authors in attendance include: (1) George Plimpton, (2) William Styron, (3) Ralph Ellison, (4) Peter Mathiessen, (5) H. L. Humes, (6) Truman Capote, and (7) Mario Puzo.