It was one terrible night during the forest fires that finally convinced Anouar Rahmani to leave Algeria. Yes, the frequent interrogations got to him, as did the lengthy trial for “insulting state officials.” But until then it all felt worth it: publishing four novels exploring queer and feminist themes; challenging his country’s conservative religious mores; using the attention to spotlight the thousands of civilians who were disappeared in the 1990s by state security forces during Algeria’s civil war and more recently jailed atheists and dissidents—some of whom were subsequently freed. Then in August 2021, as flames raged in the Algerian city of Tizi Ouzou, artist and activist Jamal bin Ismael was beaten and burned to death by an angry mob. The government denied involvement. For Rahmani the culprit didn’t matter; he had lost trust in his own society. “You feel like a target,” he says. “The regime can attack me, yes. But someone else can attack me too.” He wrote to every journalist and human rights organization he could find asking for help. In January 2022 he finally arrived in Pittsburgh to start a new life, thanks in part to the International Cities of Refuge Network (ICORN). 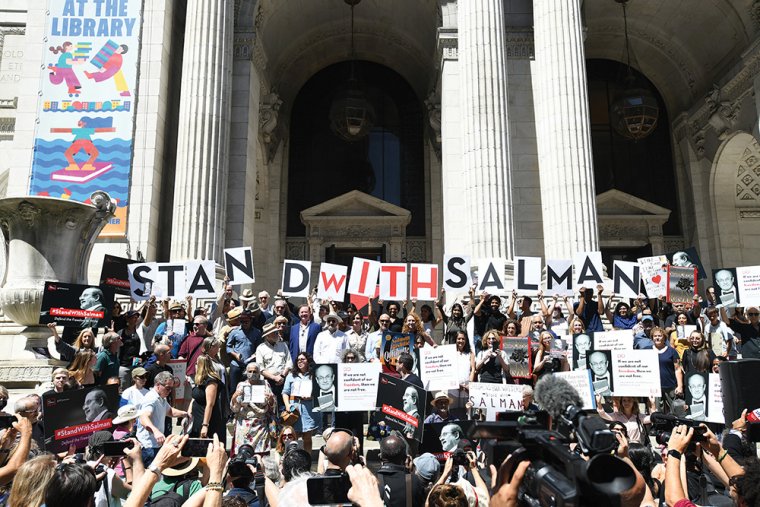 A crowd gathers at the New York Public Library in August 2022 after the attack on Salman Rushdie, showing support for the author and the freedom to write.  (Credit: Jennifer S. Altman)

Since its inception in 2006, ICORN has helped more than three hundred poets, lyricists, essayists, and novelists under threat. Originally founded a decade earlier under a different name, it was the brainchild of a cadre of outspoken authors, including Salman Rushdie, whose attack in August—which reportedly damaged his sight in one eye and mobility in one hand—thrust the issue of his profession’s risks into the spotlight. Threats to writers are on the rise worldwide, buoyed by increased nationalism, a broad political swing to the right, and the polarizing, polarized wilds of social media. With the pressure on, ICORN now works with a network of organizations at the intersection of academia, arts, and human rights to support writers abroad like Rahmani as well as scribes in peril closer to home.

“When regimes or fundamentalist groups are trying to force their views or their system on other people, the bearers of the information are the first to be curtailed,” says Marianne Hovdan, a protection manager at ICORN.

When ICORN started, it received about thirty applications a year, Hovdan says. From 2020 to 2021 it received more than four hundred. At PEN, Karlekar sees a need that’s not just deeper, but also broader in context. Beyond the violence and legal threats wrought by openly repressive regimes like Iran, Russia, China, and Afghanistan, she has increasingly found herself tracking threats in historically more democratic countries—including the United States.

“We used to focus 75 percent on international issues,” she says. But in the past several years, focus has “shifted dramatically” to domestic threats, including censorship on college campuses and, increasingly, the harassment of authors whose books have been banned in some communities. Violent rhetoric has also spiked in the borderless realms of social media, which compounds the problem.

At home, abroad, or online, the writers Hovdan and Karlekar work with face censorship, intimidation, or worse. Both cite as one example a group of Bangladeshi atheist bloggers who several years ago had their names and addresses published on a “death list” in newspapers. Not long after, ICORN helped an Iraqi journalist who had survived three assassination attempts. “We have people who have been in prison for thirteen, fourteen years, gone through horrible torture,” Hovdan says.

Endeavoring to keep cases like these in the public eye, Karlekar and her colleagues have maintained a Writers at Risk database, which now lists nearly eight hundred writers who have been jailed or threatened for their work. They also grant an annual Freedom to Write Award to a persecuted writer or poet. The prize includes compensation, but the major benefit is more profound: Of fifty-one nominees since 1987, forty-five have been freed from prison. Karlekar attributes this feat to a diversity of tactics: press statements, social media campaigns, meetings with congressional bigwigs or United Nations working groups. That’s how PEN America helped secure the release of two jailed Burmese journalists in 2018 and a trio of Saudi women’s rights advocates in 2019.

For more practical matters, Karlekar often connects writers with partner organizations like the Iowa Writers’ Workshop’s International Writing Program, which has hosted writers for three-month residencies since 1967, as well as Scholars at Risk, Journalists in Distress, and—especially if a writer is looking to flee their home country—ICORN. The organization now connects more than eighty cities around the world, including Detroit, Pittsburgh, and Ithaca, New York, in the United States. Cities host writers like Rahmani, typically through two-year residencies that provide them room, board, and connections to other resources. In addition to help from City of Asylum in Pittsburgh, ICORN’s local arm, Rahmani is also receiving support from the Artist Protection Fund and Carnegie Mellon University’s Department of Modern Languages.

When a new application arrives, Hovdan and her colleagues try to determine how urgent a writer’s situation is and what kind of support they might provide during the period between acceptance and arrival in a host city. Staff might buy computers or other equipment for writers who have had to leave their belongings behind. They might help make a security plan in an inviting city. And they often coordinate mental health support, which is a major program priority. “It’s not like you whisk them out of Iran, and everything is fine, and they can keep doing what they’re doing,” Hovdan says. “It’s often a much longer process.”

For Rahmani, leaving his family evoked a “storm of sadness.” The dark, empty streets of midwinter made it harder; he sometimes wondered if prison would be preferable. But spring came. The director of City of Asylum sometimes brings him to the symphony. New friends are teaching him the strange ways of Americans: their hand gestures, their changing moods. And he found a new partner, Luke, who is smart and kind. For now, Rahmani is trying to focus more on the outcomes of his work than on what it has cost him. “Through my writing, I was able to do a lot of things that a lot of people couldn’t do,” he says. “If I did nothing else in that country, at least I spoke the truth.”

Alissa Greenberg is a writer at PBS Nova and a freelance journalist reporting at the intersection of science, history, and culture. Her work has appeared in print and online at the Atlantic, the Washington Post, the New Yorker, and more.

NEA at Risk: The Future of Arts Funding Under Trump
by Kevin Nance | Special Section 4.12.17

Trump’s 2018 budget outline includes withdrawing funding for the NEA, making him the first president to propose the total elimination of the fifty-year-old federal agency.

PEN American Center, the central U.S. outpost for the international writers organization, will welcome a new president this spring and bid farewell this summer to its longtime executive director.