After nearly four and a half decades of work and a host of setbacks, this month Oxford University Press is publishing the world's most comprehensive thesaurus. The two-volume, 4,448-page Historical Thesaurus of the Oxford English Dictionary is not only twice the size of Roget's version, the current standard, but it also lays claim to being the first historical thesaurus compiled for any language, covering almost a million words from Old English to the present. 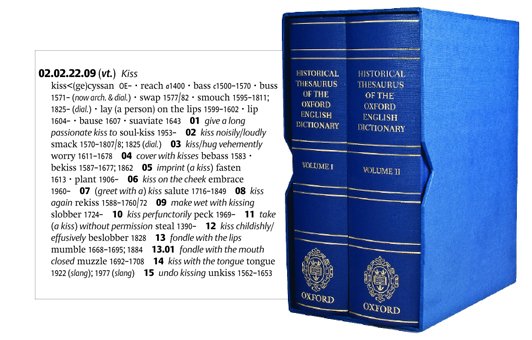 Begun in 1965 under the auspices of the University of Glasgow, the project has passed through several technological incarnations—moving from paper slips to microfilm to computer files—and survived the death of founders and dodgy financial backing. Christian Kay, one of the work's four coeditors, was twenty-seven when she joined the endeavor as a research assistant. She's now a sixty-nine-year-old professor. "Fund-raising produced all sorts of cliff-hangers," Kay told the Times of London. "People didn't know if they would get paid or not. Just as the money was about to run out, you would get a little bit more from one academic foundation or another."

Work in the early years progressed slowly, with researchers combing the twenty volumes of the Oxford English Dictionary and transcribing lists of synonyms on 6 x 4-inch cards. In 1978, things nearly went up in smoke when the building housing the sole copy of the work-in-progress caught fire. The nineteenth-century structure was burned to a shell, but the thesaurus—safely ensconced in metal cabinets—survived the blaze. "We were always very good about putting things away at night," Kay told the Daily Mail, "and the Victorian doors stood up well, although you can still see singe marks on some of the documents."

The project's chief intellectual hurdle was devising a classification system capable of organizing the more than 920,000 lexical items collected over the decades. "We started off using Roget's classifications," Kay told the Times, "but it soon became apparent that wasn't adequate, as it wasn't detailed enough. Then we virtually started from scratch with a new system. That's why it took so long."

The finished thesaurus comprises two volumes. The first is divided into 354 thematic categories—"food and drink," "aesthetics," and "war," for example—arranged within three primary sections: the external, mental, and social worlds. Organizing the work "was a very circular process," says Kay, "with disagreements between people about where to put a word, for example, whether sin should go in religion or as a general concept."

Within the first volume, listings of synonyms—including obsolete and archaic terms—are presented chronologically, allowing readers to track semantic migrations. The word sad, for instance, falls under the heading "satisfied" for the period spanning the years 1000 to 1450; appears under the rubric "steadfast, firm" for the years 1315 to 1667; and takes hold as a synonym for sorrowful in the period from 1366 onward. The second volume of the Historical Thesaurus contains a more familiar alphabetical index.

At $395, the new reference isn't likely to grace many home offices, but plans are under way to link the work online with the Oxford English Dictionary, which is available by subscription for $29.95 per month.

Adrian Versteegh is a freelance writer and associate editor of Anamesa. He lives in New York City.

I should get this for a friend. It would be much appreciated.
At $29.95 per month, within one year equals the cost of the print edition. You may as well buy it.
X