Where the Writing Will Take Her: A Profile of Jesmyn Ward

There’s another way, too, in which Ward owes her very identity as a writer to her family’s tragic history. Growing up, she dreamed of being an author and wrote poetry and, later, short stories in middle and high school, but was never satisfied with them. “I didn’t think I had the chops,” she says now, “and didn’t think I’d ever be able to develop the skills to be a writer, so I didn’t even try.” As an undergraduate at Stanford, she took some creative writing classes, but was stymied by a crippling sense of inadequacy in comparison with most of her classmates, who were far better read. “I don’t know why I’m here,” she told herself frequently. “I’m probably here just because I fulfilled a demographic.” 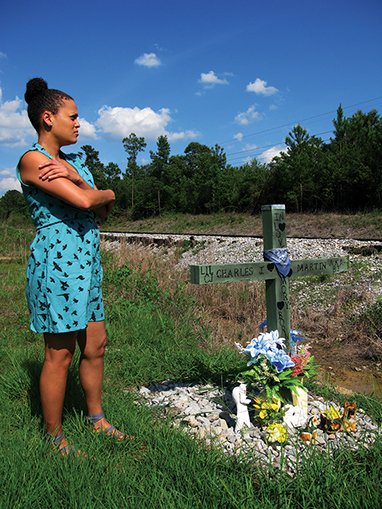 Jesmyn Ward at a memorial for her cousin, one of the men whose deaths she confronts in her memoir, Men We Reaped.

It was only after her brother’s death, on October 2, 2000, that she fully committed to writing as a career. “That sense of insecurity just fell away after my brother died,” she recalls. “It’s trite, I know, but I thought, ‘Who knows? I could die next week. I could die in a month. Maybe I’m not going to see thirty, just like my brother. So what can I do that would make me feel like my life is worth living? What can I do that would give my life meaning, in the limited time I have left?’ And the answer was writing. And I thought, ‘I might fail, but at least I will have tried.’”

At that point, Ward set about reading “seriously,” as she puts it, with an eye toward learning the craft of fiction. She read William Faulkner—The Sound and the Fury, which she found great but so difficult as to lack utility for her purposes, and As I Lay Dying, perhaps equally great but far more easily digestible—as well as books by Ernest Hemingway, Virginia Woolf, and other modernists. She also found inspiration in books by Black writers such as James Baldwin, Toni Morrison, and Walker, whose The Color Purple was important to Ward “because it showed me that you could take the Black female experience and make literature out of that.”

Lyons, who met Ward soon after her brother’s death, found her poised for literary greatness. “Her intelligence, her commitment to her writing, her level of seriousness struck me right away,” Lyons says. “Equally clear was her commitment to where she came from and the people she grew up with, along with the critical eye necessary to tell the story of her upbringing in that place and among those people. That’s why I felt from the beginning that she could and should write a memoir.”

By 2010, when Ward decided to write Men We Reaped, she was in full command of her powers as a prose stylist but still found herself delaying, in part because she felt she needed a kind of permission from her family. She had shared some early chapters with former Stegner fellows, who were encouraging, but she needed to hear from her mother and sisters. “It’s a story people need to hear,” her sisters told her, although her mother, a private, reserved woman, expressed some misgivings about divulging certain aspects of the family history. “I was so nervous that I avoided telling my mother that I was writing a memoir until I had a full draft of it,” Ward admits. “And my mom said something like, ‘Just tell the truth.’ Not that she thought I was going to lie, but she wanted me to get the truth out there, especially about the circumstances of my brother’s death. At the same time, she wouldn’t want the world to know some of the things I’ve written about my brother, such as the fact that he sold crack at one time or another, as a stopgap. And I think she’s afraid that I won’t communicate that she worked really hard to raise us on her own, which wasn’t an easy thing. When I was a kid, you know, I was resentful and angry about the way things were at home, and she probably felt like I was judgmental of her when I was a teenager. I think she’s afraid that it’s that teenage me that’s the one who wrote the book. That’s not the case, of course.” Even so: “I haven’t given the galley to her yet.”

She has given copies to her sisters, who have reacted supportively, despite signs of distress. Nerissa, for example, revealed that she cried while reading about how, on Jesmyn’s eighth birthday, their parents couldn’t afford to buy her a gift, so they made a swing in the yard for her with a piece of rope. Nerissa, who had a child of her own at the age of thirteen, said the passage made her appreciate how hard it was not to be able to provide for your family.

When Charine read the chapter about C. J., to whom she was very close, she called the next day. “That was really hard for me,” she told her sister. “I almost couldn’t finish it.”

On a broiling summer afternoon, Ward drives us, at my request, to the railroad crossing where C. J. was killed. A makeshift cross marks the spot, adorned with plastic flowers. A slight Gulf breeze jostles the nearby pine trees. Standing next to the memorial, Ward does not look at it for long, gazing instead at the horizon, the shivering pines.

“I told her I was sorry,” she says, speaking of Charine. “I told her, ‘A part of me didn’t want you to read it, to have to read it.’ I didn’t want her to have to think about those things, like whether C. J. was still alive when the car caught on fire, although of course I know she does.”

She breathes in the hot air as the sun beats down. “I hope when they get to the end of the book,” she says, “they’ll feel it was worth it.”

And then we get back into the car, which air-conditioning has made blessedly cool, and drive off toward home.