Where Big Books Are Born: Reginald Dwayne Betts on the Cave Canem Retreat

Once, at the tail end of my prison sentence, I considered applying to Cave Canem from a cell in Virginia. During those days, the bios on the backs of books were my North Star. Somewhere I’d read that Lucille Clifton, Yusef Komunyakaa, and Elizabeth Alexander were all a part of this thing, a writing workshop (what was a writing workshop?) and a retreat (and this?) for black poets. The existence of this place, after nearly a decade of honing my writing in cellblocks across Virginia, suggested not just a place for poetry, but one suited and (dare I imagine) invented for me. You leave prison looking to figure out the treble and scope of the song called freedom. In service of that, I penned a list of goals on a piece of scrap paper: get a job, get into college, get a driver’s license, get into Cave Canem. And despite the absurdly competitive admission into Cave Canem, even then it seemed to me the kind of space where the doors opened if your poems contained the necessary funk. That first summer at the retreat, my first two books—the poetry collection Shahid Reads His Own Palm and the memoir A Question of Freedom—became possibilities. Lucille Clifton gave a talk early one morning. I sat in the front row and thought of the years I spent reading her poetry in a cell. I had changed my name to Shahid and then back to Reginald Dwayne Betts, the name my father carries, because, in a poem, she said hers was already an African name. After her talk I remember stopping in the parking lot and weeping for the first time in nearly a decade. All that time in prison without a single tear and all of a sudden there was a joy worth weeping for. Later, after staying up until the sun returned, after drafting poem after poem, after having more conversations with more writers than I’d ever had, I felt like I’d found a kind of home. Where else could I stay up with a half dozen poets and the Pulitzer Prize–winning Rita Dove chopping it up about poetry until 3 AM? Where else would I be able to talk poetry with Cornelius Eady and Toi Derricotte, as if we were old friends. But this is what made it all special. One night Elizabeth Alexander gave me a copy of her essay collection Black Interior. I’d asked her for some of her work about black men, and she passed me the well-worn book that she’d been reading from for months. Today, a decade later, the book still has her multicolored stickies between the pages. When she gave me the book I was reminded of the time I’d requested her collection Antebellum Dream Book from a local library and literally slept with it for a month. Her essay “A Black Man Says Sorbet” became the reference point for my memoir. Why did it matter? Besides the books that came out of it? There will never be a moment like meeting Lucille Clifton. Over the span of an hour I raised my hand to ask her questions every five minutes. At some point I felt a little obnoxious, asking her questions about poems she’d written decades ago, monopolizing the time and the space as if I was the only one there. But I swore that her work had been a rope pulling me toward this thing called freedom and poetry for a long time. Cave Canem opened up the space to think about who I was, and for me that meant it gave me permission to chase the thing that might make me weep. And what is writing, if not this? 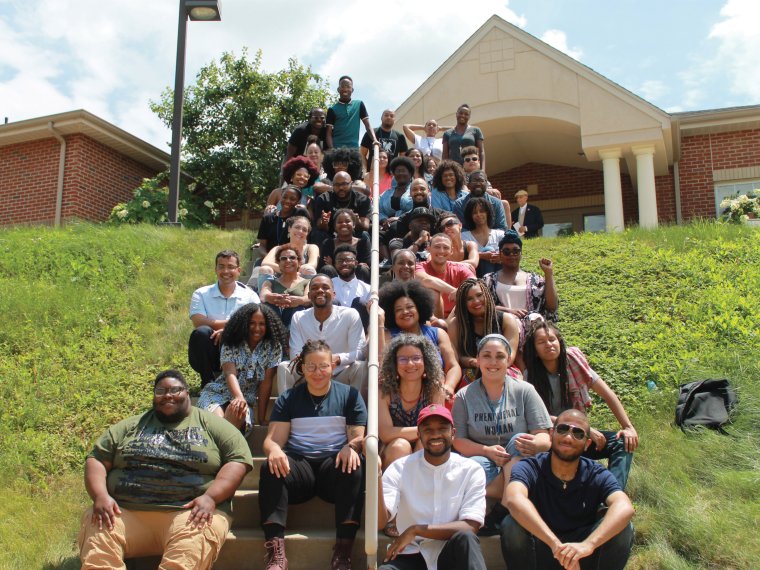 Three Points of Productivity:
1. Community and purpose. You cannot beat learning that you don’t exist on an island.
2. Lineage. Not only does Cave Canem expand your network of immediate peers, but you get the finest education from writers you’d not otherwise meet.
3. Complexity. It don’t always sing true or beautiful, but it sings, and learning that in a place like Cave Canem was essential.

Reginald Dwayne Betts is the author of three books, including the poetry collection Shahid Reads His Own Palm, published by Alice James Books in 2010.