When Editors Are Edited: Three Debut Authors on the Ultimate Role Reversal

Elizabeth Gaffney, Adrienne Miller, and Adrienne Brodeur have grown accustomed to being topics of conversation in literary circles. Publishing insiders know the editorial positions they have held: advisory editor of the Paris Review, literary editor of Esquire, and founding editor of Zoetrope: All Story, respectively. But recently, each of them acquired a new, even loftier title: debut novelist. 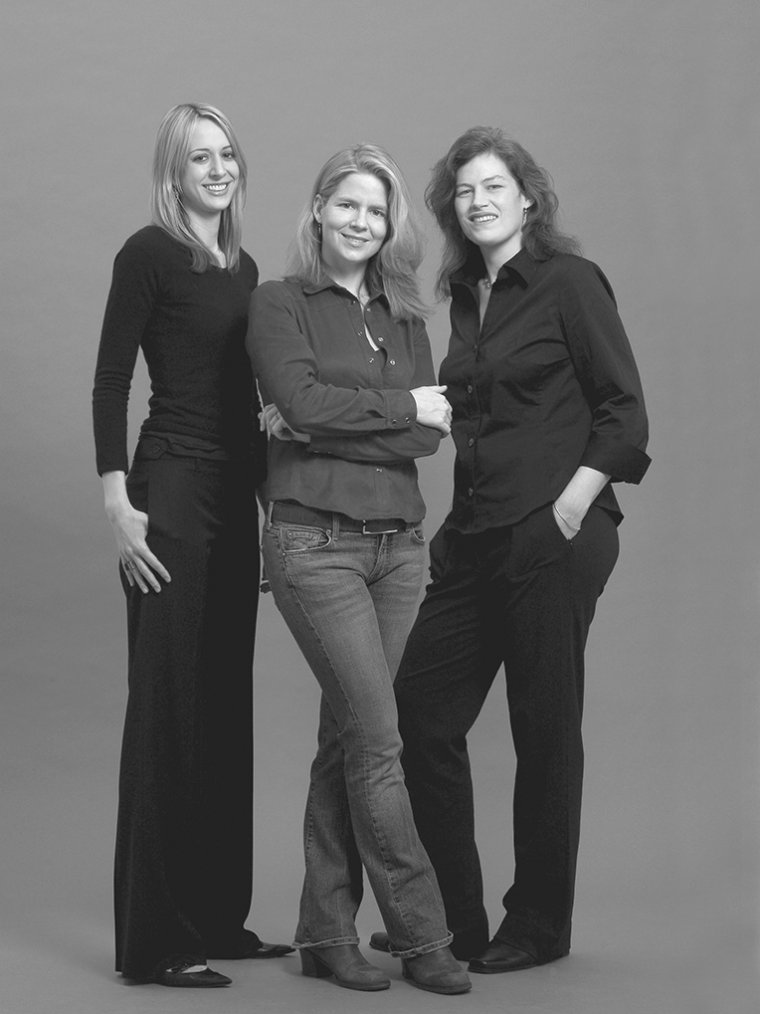 Gaffney’s first novel, Metropolis, was published in March by Random House; Miller’s The Coast of Akron will be published by Farrar, Straus and Giroux this month; and Brodeur’s novel, Man Camp, is forthcoming from Random House in July. The three books could not be more different—either in plot or writing style. There is a sprawling, Dickensian narrative set in New York City in the years following the Civil War; a funny yet compassionate portrait of a dysfunctional family in Ohio; and a lighthearted story of two young women who hatch a scheme to bring out the “inner man” in the men they love.

The quality of writing in the books will speak for itself. Not reflected in the novels, however, are the challenges that each of these women faced—finding the time to write novels on top of their editorial workload, managing the influence that editing some of the best writers in the country had on their own writing, and negotiating the dual instincts of writer and editor in the creative process, to name a few. Their experiences offer insights into the industry, as well as lessons for every working writer.

Elizabeth Gaffney worked at the Paris Review for 16 years, starting out—as many staffers do—as an unpaid editorial assistant, soon after she graduated from Vassar College with a degree in philosophy. She worked her way up to managing editor, the highest-paid position when founding editor George Plimpton was alive. “I always thought I was a very good managing editor,” Gaffney says. “I was committed to it and I would work late, but I didn’t write enough. And I wanted to write.” In 1995, she decided to give up her job and the comforts that went with it—health insurance, a full-time salary, and a degree of security. But Gaffney had no doubts. “It was a big certainty. I knew that I really wanted to try.”

Plimpton was supportive of her decision, and kept her on staff as a part-time editor-at-large while she pursued an MFA at Brooklyn College. “I had a lot of anxiety about going to one of the better-known New York programs because most of [those students] had been our interns,” she says. “No one from Brooklyn College had even applied for an internship at the Paris Review since I had been there. Brooklyn College was a very isolated little island out there.” While the decision to cast off the chains of a full-time job and enroll in a graduate program allowed Gaffney to concentrate on writing, she didn’t consider an MFA to be a badge of legitimacy or a guarantee that her new goals would be achieved. “I don’t think the MFA is anything other than a kind of social construct that enables people to focus on their work, and maybe meet a good community of people,” she says.

The program at Brooklyn College did in fact enable her to focus on her own work. By the time Gaffney received her MFA, in 1997, she had written some early chapters of the manuscript that would eventually become Metropolis. It took Gaffney seven more years to finish the book, which weighs in at over 450 pages, all the while editing short stories for the Paris Review and freelance copyediting for New York magazine. “I still needed to make money, and I didn’t sell the book until I had finished the whole manuscript, so I was always working full time.” Gaffney set up a grueling schedule that involved doing all of her editorial work, including 12-hour copyediting shifts, within a minimum number of days. The rest of her week was open to writing. “So I was busy, really busy,” she says. “But it gave me whole days—a different structure to my time—and that was the transformation for me, to being able to focus on my work.”

Adrienne Miller was able to concentrate on the writing of The Coast of Akron despite her full-time responsibilities as literary editor of Esquire, a position she has held since 1997. Like Gaffney, Miller didn’t have a contract to write her book—she finished the novel before her agent, Christy Fletcher, sold it to her editor at FSG, Eric Chinski. “I just kind of wrote it in darkness and secrecy for years,” Miller says. At Esquire she edited stories by Don DeLillo, David Foster Wallace, Tim O’Brien, George Saunders, and Elizabeth McCracken, among others, and wrote her book at night and on weekends. “You just kind of make time for it,” she says, and pausing, adds: “The early morning people I don’t really understand. The ‘I rise at four A.M. and write for eight hours’ people—I don’t get that. I basically just didn’t have an enormously exciting social life for several years.”

Despite her self-imposed seclusion, the position in which Miller found herself—editing stories by famous writers for a 72-year-old, award-winning magazine while writing a novel that would eventually be bought by a major publisher—is sure to elicit a fair amount of literary envy. But Miller, who was born in Columbus, Ohio, and grew up in Akron, says she never envisioned such charmed circumstances. “I come from a very practical, midwestern family, and the idea of becoming a writer was to me, for years, just so outrageous, so unheard of. If I had come from a different kind of family, and if I had different values, I probably would have gone to graduate school right out of college and tried to make a go of it as a writer. As it is, I feel like I’m getting a little bit of a late start in publishing this book,” says Miller, who is 32. She got her start in publishing at 22, when she was hired as an editorial assistant at GQ.

When it became clear to her that the work-in-progress had the potential to become a book, Miller, like Gaffney, approached her boss and asked to take some time off to pursue her writing. “David [Granger], the editor in chief, was really wonderful and flexible about letting me continue to do fiction but scaling back my other roles at the
magazine.”

Unlike Miller and Gaffney, Adrienne Brodeur sold the idea of Man Camp to a publisher before writing the book. For her, juggling the demands of a full-time job with those of writing a novel was not a practical option. “I get very involved in what I’m doing,” she says. “I would really have to find a ‘very administrative, not involved’ job to try to figure out how to balance both.”

Like Gaffney, Brodeur started out in publishing as an editorial assistant, at the Paris Review, but in late 1995 she teamed up with director Francis Ford Coppola to cofound Zoetrope: All Story. The first issue was published in 1997, and within five years the literary magazine had won a National Magazine Award for Fiction, an honor that Brodeur says was the high point of her career. For Zoetrope, Brodeur edited and published stories by such luminaries as DeLillo, Gabriel García Márquez, and Cynthia Ozick.

But in 2002, Brodeur was looking for a change. “I knew I wanted to step down from Zoetrope for quite some time—not because I wasn’t happy—but because I think a magazine can have a life under a certain editor and [then] it needs some new blood,” she says. When Coppola expressed his interest in moving the editorial office of Zoetrope from New York to San Francisco, Brodeur decided it was time to find another editor for the magazine. “I really didn’t know what I was going to do next, but I’d had a couple of books in the back of my brain for a long while,” she says. “One thing that became apparent is that I didn’t immediately want another really grueling job.” So Brodeur met with an agent, Heather Schroder, and told her about the idea for Man Camp. The two agreed that Brodeur should write a proposal and a few chapters and try to sell it in advance of writing the whole book.

“I had this very romantic notion that I would take the summer and go to Cape Cod—my first big restful period,” Brodeur says. But when she received an offer to serve as a judge for the 2002 National Book Awards, Brodeur couldn’t refuse. “It fit into this romantic notion so easily,” she says. “Of course, it meant that 300 books arrived at my little cottage in Wellfleet, and I had no summer and no writing—just frantically reading and stressing out.” After the winner was chosen—Julia Glass, for Three Junes—Brodeur started writing the proposal and sample chapters in earnest. In May 2003, she received a book deal for Man Camp from Random House.

Once again, Brodeur was about to get “very involved” in what she was doing: writing her first novel. But this time she didn’t have an office and she didn’t have a staff. Nor did she have the director of The Godfather and Apocalypse Now checking in to offer his support. “It sounded so wonderful at first—and I won’t pretend it isn’t pretty great to have your own schedule and flexibility and all that—but it’s also, as any writer will tell you, quite crazy-making to be alone in a room and not to have all of the typical things that you have when you’re at work that provide you the feedback that you’re doing a good job each day,” Brodeur says. “No one is patting you on the back and no one writes you a little fan letter. You’re just sort of thinking, ‘Is this good, is this horrible?’” Brodeur knew a little something about the support and encouragement—not to mention the editing—that most writers need. She had been offering it to her authors at Zoetrope for years. But now the roles were reversed, and Brodeur, like Gaffney and Miller, was in the unique and sometimes awkward position of applying what she had learned as an editor to her own writing.