Tracy Fullerton, a game designer at the University of Southern California (USC), has felt a connection to Henry David Thoreau’s Walden ever since her father gave her a copy of the book when she was a kid. After rereading it during a stressful time in her life, Fullerton was inspired by Thoreau’s meditations in the novel—namely, how to meet our basic needs, refresh our souls, and connect with nature. “That spoke to me as a game designer,” she says. “I wanted to make a virtual experiment out of it.” Walden, a Game began to take shape. 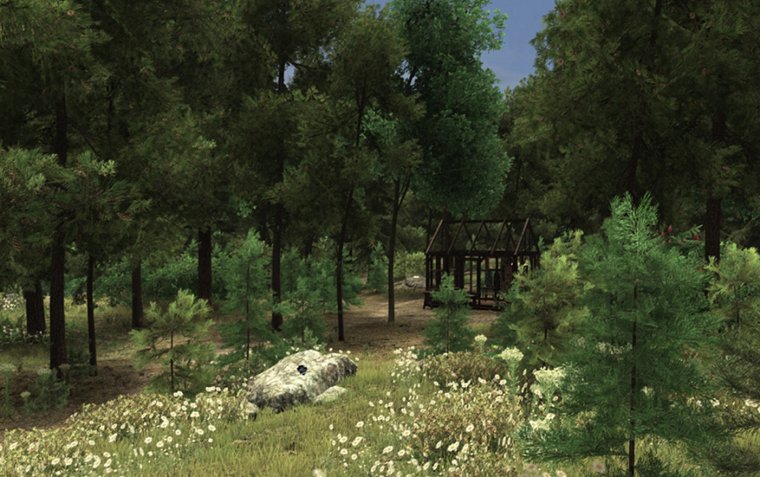 The cabin in the woods near Walden Pond that players build in Walden, a Game.

After ten years of development, the game is now nearing completion and is set for release later this year, to coincide with the bicentennial of Thoreau’s birth on July 12. In the game, players take on the role of Thoreau when he moved to Walden Pond in the summer of 1845 and started building his cabin. As players move through the seasons, they make choices about shelter, food, and clothing to ensure survival. But the game also aims to re-create the reflective tone of the book, encouraging players to pause and observe nature around them. In fact, if players become too busy focusing on tasks, the game sounds a warning: “Your inspiration has become low but can be regained by reading, attending to sounds of life in the distance, enjoying solitude, and interacting with visitors, animal and human.”

The video game field has long been dominated by stories featuring violence, sporting action, or cartoon characters on simple missions. But more and more, literary adaptations and digital narrative immersions like Walden, a Game are carving out their own space in the gaming world. At Boston College, English professor and James Joyce scholar Joseph Nugent and a team of students are developing Joycestick, an adaptation of Joyce’s sprawling stream-of-consciousness novel Ulysses. In the adaptation, players strap on a pair of virtual-reality goggles and explore the world of the novel. There is no quest or end goal; instead, players are invited to explore individual settings from the book, such as a café in Paris or the Martello tower in Sandycove, Dublin, where the novel opens. When players touch different objects that figure into the novel—such as a bowler hat or a can of potted meat—they hear narration from the book. Joycestick will be unveiled at various festivals and conferences this summer, including in Dublin on Bloomsday, which is celebrated each year on June 16, the date that Ulysses takes place.

Ulysses and Walden are not the first books to have become virtual experiences. In 2014, Inkle Studios, based in Cambridge, England, adapted the classic Jules Verne novel Around the World in Eighty Days into a game titled 80 Days. Players race around the globe, compete with fellow travelers, and decide on the best route and mode of transportation—steamer, train, horse, or hot-air balloon—to complete their journey. In January the Canadian studio Bit ByterZ released Memoranda, a game based on Haruki Murakami short stories. And in February the New York Times Magazine featured an interactive video narrative based on George Saunders’s novel, Lincoln in the Bardo. Viewers can click and drag their mouse on the screen and see a 360-degree view of a cemetery, in which ghosts featured in the book tell their stories.

Adapting a work of literature into a game or virtual experience poses a unique set of challenges for developers, who often try to capture a book’s essence, if not its plot. “Novel-esque storytelling is very difficult to gamify,” says Jon Ingold, the narrative director at Inkle Studios. “Games, unlike stories, are usually based around repetitive actions.” Like Ingold, Nugent finds the complex characters of novels particularly difficult to develop. “It’s a different mode for people to identify with a character and emotional experiences,” he says. “It brings up fascinating questions of the nature of literature and representation. What does it mean to be a participant? Through whose eyes are you seeing the scene?”

These questions are part of why Fullerton and Nugent believe their games can have an educational impact, especially as students might struggle with dense books like Ulysses and Walden. Nugent acknowledges few students have read Ulysses and hopes that Joycestick, along with being an educational experience for the Boston College students who are making it, can offer others a taste of a book they might otherwise be too intimidated to read. Fullerton also hopes Walden, a Game can be used in the classroom, and has already heard from many teachers who want to use the game to make the book more approachable. In public tests of the game at film festivals and gaming shows, Fullerton has witnessed firsthand how people who don’t necessarily connect with the book can latch on to the game. “People come up to us and say, ‘We know this book; it’s so boring,’” she says. “But then they start to play and say, ‘Oh, yeah, I remember this part; we should do this or that.’ They completely change their tone.”

Literary games also seem to be garnering more respect in the arts world. Walden, a Game has received funding from the National Endowment for the Arts and the National Endowment for the Humanities. “This might have been seen as a technical form before,” Fullerton says, “but in the past decade digital gaming has come to the point where people are working with it as an artistic form, and it’s being recognized.” Nugent agrees, pointing out that creating a virtual experience of a book as classic as Ulysses calls for the effort and attention of an artist. “Ulysses is a work of literature,” he says. “It would be untrue and indecent and improper and wrong for the followers of Joyce to not turn this into something beautiful.”

Rachael Hanel is the author of We’ll Be the Last Ones to Let You Down: Memoir of a Gravedigger’s Daughter (University of Minnesota Press, 2013).

Taking inspiration from Haruki Murakami’s short stories, a Vancouver-based game studio has created a point-and-click video game that allows players to live in a world created by words.