As a hallowed stage for world-class readings, the Unterberg Poetry Center at the 92nd Street Y in New York City has been compared by a host of writers to venues such as Madison Square Garden (Paul Muldoon), Carnegie Hall (Kay Ryan), Buckingham Palace (Frank McCourt), and Yankee Stadium (Sherman Alexie). Ian Mc-Ewan called it “probably the best place to give a reading on the planet.” Now in its seventy-fifth year, the venerable venue will be celebrating the milestone with a season of special programming that kicks off this fall.

The Poetry Center was founded in 1939 by William Kolodney, the educational director of the 92nd Street Young Men’s and Young Women’s Hebrew Association in New York City, to encourage and enhance the writing and understanding of poetry. The center offered classes on writing and reading poetry, and for fifty cents a ticket New Yorkers could hear William Carlos Williams, W. H. Auden, Marianne Moore, or Langston Hughes read their work.

The center has since expanded its programming to include fiction and nonfiction, and the number of classes and events has multiplied, but its mission remains the same: in a world of shrinking attention spans and constant distraction, to serve as a haven for writing.

“We offer a kind of oasis where concentration and attention are rewarded,” says Bernard Schwartz, the director of the Poetry Center. “The modern world is left at the door—which is not to say we are old fashioned.”

Like the act of writing itself, the yearlong anniversary celebration will be introspective and generous: Schwartz and his colleagues have scoured the center’s archives for historical gems—images, documents, and recordings—to be presented publicly over the course of the year.

First up is an exhibition called Love the Words, a collection of more than eighty photographs, letters, and other ephemera detailing the center’s history and inner workings, which runs at the 92nd Street Y’s Weill Art Gallery until November 25. Visitors can see the center’s first brochure, an early expense report listing pricey phone calls to noted poets, and letters from writers about their upcoming and recent readings.

Some of the most notable artifacts include several letters of John Malcolm Brinnin, the director of the center from 1949 to 1956, which were borrowed from his archive at the University of Delaware. Truman Capote wrote Brinnin of his troubles finding a ship from Paris in time for his reading. T. S. Eliot explained that he was nervous his repertoire wasn’t big enough to justify another reading. Arthur Miller asked to be reminded as the date of his reading approached, in case he forgot. Elizabeth Bishop declined an invitation, apologizing for being a bad reader.

“The idea that you’d invite a writer to read is totally normal today,” Schwartz says. “Decades ago that wasn’t necessarily true, and some reacted with less than full enthusiasm.” Highlights among the exhibit’s photos, some never before seen, include Tennessee Williams reading with Carson McCullers; a young Seamus Heaney relaxing backstage; Allen Ginsberg reading with his father, Louis; Philip Roth with his arm around his friend Saul Bellow; and Dylan Thomas, whose battle cry “Love the words,” uttered backstage before the premiere of his play Under Milk Wood at the center in 1953, inspired the exhibition’s title.

The Poetry Center is also offering an anniversary gift to those outside New York: a free collection of seventy-five historic audio and video recordings from the institution, selected and introduced by luminaries of the present. A handful are already available for streaming online at 92yondemand.org, including a 1949 E. E. Cummings reading with an accompanying essay by novelist A. L. Kennedy, and Vladimir Nabokov’s penultimate public reading (of mostly poetry), in 1964, introduced by Bryan Boyd, one of his biographers. Another highlight is Pablo Neruda’s first U.S. reading, from 1966, described by translator Edith Grossman. The seventy-five pairings will be posted a few at a time throughout the 2013–2014 season.

The anniversary year will boast a rich lineup of readers, too, including Philip Roth (October 24), Colum McCann (December 16), Joyce Carol Oates and Claire Messud (February 13, 2014), John Ashbery (April 3), and Derek Walcott (April 9). In January, Harold Pinter’s eponymous play based on Proust’s Remembrance of Things Past, first produced in London in 2000, will see its U.S. debut on the Unterberg stage.

“Stepping onto that stage feels like a great big homecoming,” says Gary Shteyngart, who will read from his forthcoming memoir, Little Failure (Random House), at the center on February 3. “It’s the most enthusiastic audience I’ve ever read for.”

Novelist Rivka Galchen, who has headlined at the center and has both taken and led classes there, recalls seeing Saul Bellow read at Unterberg not long before he died. “The auditorium had that sort of magic that evening,” she says, “with the bare, large stage and Bellow under the bright light, and even the balcony full of us, who had probably spent many hours alone with his books. His voice wasn’t at its best, but somehow he still had, well, the duende with him.”

Among the nearly twenty writing workshops and seminars offered at the Poetry Center next spring are a class on memoir taught by Mark Doty and one on fiction led by Susan Choi. Such courses—which have proven useful to poets and writers of all levels as an alternative or supplement to MFA programs—have produced several distinguished alumni, including Galchen and Shteyngart. Galchen recalls watching Joyce Johnson line-edit one of her paragraphs, making it twice as good. As for Shteyngart, he took a class with Sigrid Nunez in the late 1990s. Not yet having committed to an MFA program but seeking feedback on his first novel-in-progress—which would become The Russian Debutante’s Handbook (Riverhead, 2002)—Shteyngart was drawn by the institution’s cultural cachet. “Getting feedback from Sigrid was great,” he says. “I had some stupid titles for the book. One was ‘The Pyramids of Prague.’ Sigrid said, ‘Oh, no.’”

The center’s annual “Discovery”/Boston Review Poetry Contest has also offered important recognition for emerging poets since 1952, when an unknown John Ashbery won the inaugural prize. Ashbery will help judge the 2014 contest, along with three other former winners. Four poets will each receive five hundred dollars, publication in the Boston Review, and a reading on the Unterberg stage. The submission deadline is January 24.

The perks are enviable, but the power of the prize—much like that of the Poetry Center itself—is also intangible. In a 1975 letter to Brinnin, included in Love the Words, Ashbery wrote that the prize “gave me the courage I needed then to continue writing.”

Jonathan Vatner is a fiction writer living in Brooklyn, New York. He is the staff writer for Hue, the alumni magazine of the Fashion Institute of Technology. 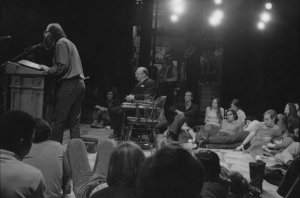 This year the storied Unterberg Poetry Center at the 92nd Street Y in New York City celebrates its seventy-fifth anniversary. The first in a series of events to mark the occasion, an exhibition called Love the Words—which includes more than eighty...
X