Novelist Tom Perrotta visited the University of New Hampshire in Durham as part of its Writers Series on an early March afternoon that was sunny enough for New Englanders to shed their wool caps and warm enough for the giant sand-filled snow banks that lined the roads to recede ever so slightly. Hosted by the school’s English department, the series invites poets and writers of fiction and nonfiction to spend time in the classrooms with writing students as well as give an afternoon reading. Perrotta, the bestselling author of five novels, including The Abstinence Teacher (St. Martin’s Press, 2007), was the latest guest in a lineup that includes Russell Banks, Billy Collins, Ha Jin, Edward P. Jones, Li-Young Lee, Phillip Lopate, Alistair MacLeod, and ZZ Packer. 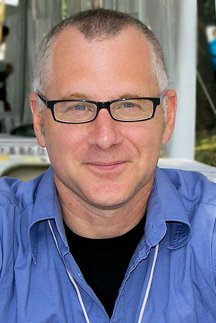 Newsweek once noted that Perrotta is like “an American Nick Hornby: companionable and humane, lighthearted and surprisingly touching.” It’s a description that held up during the event in New Hampshire: Perrotta was open, affable, and self-effacing at every turn.

“I’m going to do something I don’t usually do,” said Perrotta, dressed in black and smiling, to an audience of sixty or so students, professors, and Durham residents gathered in a room that resembled a single-screen movie theater. “I am going to read from two of my novels rather than just one." He explained that he would read a "quiet" piece from his 2004 novel Little Children (St. Martin’s Press) then a “comedy” piece from The Abstinence Teacher.

“Before I begin this,” Perrotta continued as he opened a well-worn copy of Little Children, “I should clear up a potential confusion.” He explained that the character Todd that he would be reading about—also known as “The Prom King”—underwent a name change in the 2006 film adaptation of the novel. When Perrotta cowrote with director Todd Field the screenplay for the film, Field wasn’t comfortable having another “Todd”attached to the project. So the character’s name was changed to “Brad.”

“Of all the little indignities that writers suffer when a book is adapted to film, that one felt particularly strange,” said Perrotta, adjusting his thin-frame, Euro-style glasses, “and it confused me as I worked because I’d spent so much time thinking of this character as Todd.” The collaboration did, however, go on to earn an Academy Award nomination for Best Adapted Screenplay.

Perrotta sipped from a small bottle of Poland Spring water as he read a section in which Todd/Brad, a married thirty-year-old wistful about his changing life, is supposed to be studying at the neighborhood library for his third attempt at the bar exam. Instead, he avoids the work and lingers outside, dreamily watching a group of skateboarding teenagers jump and flip their boards. Todd wonders how the events of his life have led to that moment.

As Perrotta read into the microphone, the crowd grew increasingly quiet. Cell phones were shoved away into the depths of thick book bags. No one so much as shifted in his seat. You could hear the white noise of the speakers hissing in tandem with Perrotta’s voice as he read the last lines of the passage: “I must have been like this. I must have been one of them.”

Setting up the excerpt from The Abstinence Teacher—which he is adapting into a screenplay with Little Miss Sunshine directors Jonathan Dayton and Valerie Faris—Perrotta explained that he wanted to tackle a novel that featured characters that resemble the Christian Right voters who helped reelect George W. Bush in 2004.

Once again, Perrotta’s reading had the audience hanging on his every word, but this time with wide smiles on their faces. He read a section in which a chauvinistic gym teacher is forced to attend a Saturday morning “refresher” course on the benefits of abstinence. The teacher explains that he is there because he showed his students a Playboy centerfold from the 1970s—his attempt to derail their interest in surgically enhanced breasts. Perrotta kept the room rippling with uneasy laughter.

After the reading, Perrotta took a short round of questions from students and faculty.

“I guess I would compare myself to those crustaceans that have these little, slow accretions,” the author said in response to the question of how long it takes him to write. “I never write five pages in a day…maybe one a day.” Perrotta explained that each day he polishes and edits what he wrote the day before then hopes for a “blip” of new material. “It doesn’t come easy,” he said. “I don’t just start, I have to slowly pick up steam.”

When asked if he outlines, Perrotta said he doesn’t because “until you really know the characters, you don’t really know what they’ll do or what their reactions will be.” He did admit that the lack of structure made “Lucky Winners,” his first—and still unpublished—novel, “too sprawling.” He conceived of Election in part because it had time constraints (the length of a high school election) that gave it narrative organization; his novel The Wishbones (Putnam, 1997) is confined to the time period between a wedding proposal and the wedding day.

When it came to a question about research, Perrotta said he would never take it to a “Tom Wolfe-level” and warned that research can bog down writers. “With every book, I try to make one pilgrimage,” he said. For The Abstinence Teacher that meant attending a rally for the evangelical Christian organization the Promise Keepers; for Joe College (St. Martin’s, 2000) it meant riding along on a lunch truck for the day. With Little Children, a large chunk of his “research” was done before he began: “I have two kids and when they were young I spent what felt like years at the playground. Out of writerly despair, I thought, ‘I’d better make something out of this!’”

Tom Paine, a new professor in the University of New Hampshire’s MFA program and author of the short story collection Scar Vegas (Harcourt, 2000) and the novel The Pearl of Kuwait (Harcourt, 2003), asked Perrotta how he has established depth in his characters.

“I think I do it in a very old fashioned way: flashbacks,” said Perrotta. “It’s a very exploratory process for me where I put a character in a situation and see what happens.”

Near the end of the question-and-answer session, Perrotta discussed the scene from Little Children that he had read earlier. He admitted that when he was writing the novel a group of teenage skateboarders regularly zipped up and down his street. The loud buzz of the polyurethane wheels on the asphalt distracted him. Perrotta recalled how he would leave his desk and his writing to stand at the window and watch them: “I would think to myself, ‘I hate you…and I wish I was you.’”