Not since the Great Depression have we had it so bad; this is what we hear. Parallels to 1930s America are easy hunting: a battered stock market, bank closings, mass home foreclosures, and war. While the ebb and flow of our national maladies fluctuates, the punishing particulars get fixed in the pages of our national literature. Now, as the presidential election approaches, our national hand-wringing has ramped up and everyone is once again focused on the perennial question: What makes America America? 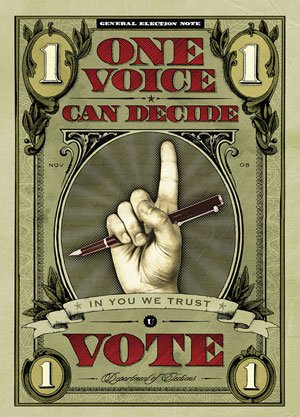 The question underlies much of the talk in our news media, but two recent literary anthologies—State by State: A Panoramic Portrait of America (Ecco), edited by Matt Weiland and Sean Wilsey, and State of the Union: 50 Political Poems (Wave Books), edited by Joshua Beckman and Matthew Zapruder—show just how far this popular introspection reaches into our creative communities of writers and artists.

"Artists must raise their voices when there is wrong in the world. If writers remain silent to the questions of their time, they leave the framing and the investigations of the moment to journalists and politicians," says Brian Turner, a contributor to State of the Union, which offers poetic responses to a wide range of politically red-hot topics such as race, terrorism, the nation's reaction to Hurricane Katrina, and the Bush administration. The anthology also showcases a variety of poetic styles—from the abstract and beautiful juxtapositions of John Ashbery's "Annuals and Perennials," to the cool observations of Lucille Clifton's "Tuesday 9/11/01," to the war pictures rendered by Turner in "Observation Post #71."

"Some poems want to yell, others want to be quiet and contemplative. This is what we found and what we wanted to show," says Beckman of the work he and Zapruder collected for State of the Union, the profits from which are being donated to the nonprofit veterans organization Swords to Plowshares. The editors, both poets themselves, knew that good political writing remained alive and well in the United States; all they had to do was find it. Over the course of four years—roughly the period since George W. Bush won reelection—they read widely and found poems in print while also conducting an open call for new political poems that produced more than fifteen hundred submissions.

As the military campaign in Iraq approaches the six-year mark next March, it should come as no surprise that war is a major theme in the collection, and Turner, a seven-year veteran of the army, whom Dana Goodyear dubbed a "war poet" in the New Yorker, is one of its strongest voices. "My work is definitely political, though sometimes that effort is subtle," says Turner, whose award-winning debut collection, Here, Bullet, was published by Alice James Books in 2005 and remains part of the literary conversation about the war in Iraq. "Poetry, when shared, often creates opportunities for the person experiencing the poem to be moved or changed by the experience. I believe one would be hard-pressed to discover a poem that doesn't have a political aspect to it," Turner says. Indeed, Beckman says the poems in State of the Union are "only a tiny part of what's happening in political poetry today."

Matt Weiland and Sean Wilsey edited quite a different anthology, but one that is equally engaged in the question of what makes America tick. Inspired by the WPA (Works Progress Administration) Guides produced by the Federal Writers' Project from 1935 to 1943, State by State is an inquiring and playful mix of hometown reporting and personal memoir about each of the fifty states. The list of authors who contributed to the book is impressive and includes William T. Vollmann on California, Jonathan Franzen on New York, Jhumpa Lahiri on Rhode Island, Louise Erdrich on North Dakota, and forty-six others—Heidi Julavits, Dave Eggers, Myla Goldberg, Rick Moody, Susan Orlean, George Packer, and Ann Patchett among them.

Weiland, deputy editor of the Paris Review, describes in the book's preface what he and Wilsey, editor-at-large of McSweeney's Quarterly, set out to accomplish: "We wanted something broad-minded and good-hearted; something bold, intimate and funny; something full of personal anecdote and strange characters and hidden truths. What we wanted, we realized, was a road trip in book form." The two compiled a list of a couple hundred writers they admired and picked combinations that seemed to strike a chord—for example, Joshua Clark, author of Heart Like Water: Surviving Katrina and Life in Its Disaster Zone (Free Press, 2007), on Louisiana; and Charles Bock, author of Beautiful Children (Random House, 2008), on Nevada.

Varying in style and approach, the contributors to State by State share both current facts and cultural history related to their state while also telling a personal story. In his essay on California, longtime resident Vollmann reaches playfully back to "conquistador times" in a quick saga that touches on water and cheese, cattle and cars. Franzen, in one of the funniest romps in the book, writes up a mock interview with a fictional publicist for the state of New York.

In addition to essays, State by State features a series of tables, some serious and some silly, that rank states in such categories as toothlessness (40.5 percent of West Virginians over the age of sixty-five have had all their natural teeth extracted), population without health insurance (24 percent of Texans), and alcohol consumption (21.8 percent of Wisconsinites binge-drink).

What the work in these new anthologies says about America varies from contributor to contributor, and, indeed, from state to state. But the editors hope that the literary snapshots of the country they offer—not unlike the social portraiture of Sinclair Lewis, John Steinbeck, Upton Sinclair, and other social realists of the last century—will be read and discussed long after the ills that currently plague us are history.

Joe Woodward lives in Los Angeles and is at work on a biography of Nathanael West to be published by Atlas & Co. in Spring 2010.

This is going to sound petty, but seeing Lucille Clifton's poem with the capital letter is a little jarring. The poem is titled "tuesday 9/11/01."
X