After one of the Telling Room’s first student readings in 2007, Gibson Fay-LeBlanc, the nonprofit youth writing center’s first employee, knew they were onto something. The room was packed with people who came to hear immigrant and refugee high school students tell their stories of coming to America. “That night was electric,” recalls Fay-LeBlanc. “Everything rested on a very simple idea: a group of young people together, in a room, with writers, telling stories.” The reading encapsulated the mission of the Portland, Maine–based Telling Room: to empower youth and build community through storytelling. 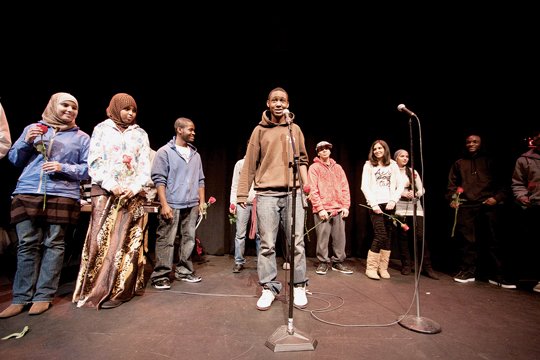 The Telling Room began about ten years ago, in 2004, as so many ambitious endeavors between friends begin—from conversations held in living rooms, around kitchen tables, and at coffee shops. In those days, founders Susan Conley, Sara Corbett, and Michael Paterniti met wherever and whenever they could to plan writing workshops they hosted at local high schools and at the Salt Institute for Documentary Studies in downtown Portland. As working writers and parents of young children, all three founders shared the unflagging belief that would go on to define the Telling Room: that children and young adults are natural storytellers, and that stories contain the power to change the lives of both tellers and listeners. The founders were also keenly aware of Maine’s influx of refugees from Sudan, Somalia, and Iraq, among other countries, and that storytelling presented an opportunity to connect the myriad cultural communities within Portland.

“We are trying to give kids a positive message about their own voices—the power of expression,” says Corbett. “You so often encounter adults who say, ‘I hate writing.’ In most instances it’s because someone early on made them feel like they were bad at it. We work to counter that. If you’re a kid, and you have a community that’s consistently interested in your voice, you’re going to keep using it, to greater and greater effect.”

The Telling Room currently partners with more than fifty schools throughout Maine and serves more than twenty-two hundred students annually through workshops, summer camps, field trips, readings, and in-school residencies. Each year at least four hundred volunteers donate their time, and since its founding the Telling Room team has expanded to a staff of nine, plus five interns and a twelve-person board of directors. Meanwhile, the organization’s annual budget has grown from roughly $100,000 six years ago to just under half a million dollars today.

In its early years, the Telling Room founders built the organization’s reputation by reaching out to Portland-area schools and to the local writing community. “When we started, we realized we had to turn the ‘Build it and they will come’ mantra on its head,” says Conley, who served as the organization’s first executive director. “No one was coming. No one knew what we were offering. So we fanned out across the city to every middle and elementary and high school and we found the English department heads and we found the teachers and the principals and we asked, ‘What do you need? How can we help you teach story writing?’” The founders brought authors Jonathan Lethem and Susan Orlean to town for literary events, and hosted Dave Eggers and Valentino Achak Deng for a reading and student discussion about Eggers’s novel What Is the What (McSweeney’s Books, 2006).

The tide turned for the Telling Room around the time of that student reading in 2007. The organization’s work with local immigrant and refugee high school students to bring their stories to the greater community grew into the Story House Project, which included a partnership with Maine College of Art students to build actual “story house” art installations, and the publication of I Remember Warm Rain, an anthology of the students’ stories. Later that year, the Telling Room settled into its first permanent home in Portland’s historic Old Port district and hired more staff. George Saunders visited with students in the new digs. By the time Elizabeth Gilbert visited, in 2008, at the zenith of Eat, Pray, Love fervor, the organization had firmly established itself as part of the community.

Today, the Telling Room offers a wide range of programming. In addition to its workshops, residencies, and summer camps, the organization also hosts community events like the Super Famous Writers Series, which brings in authors from around the country to give readings and discussions, and Slant, a spoken-word storytelling event inspired by PRX’s The Moth Radio Hour. Executive director Heather Davis is currently leading two newer programs, Young Writers & Leaders and Young Emerging Authors. “These programs,” says Davis, “allow international English Language Learners and talented teens with literary ambitions to spend a whole school year or more working with staff to hone their writing skills and publish and present their work to the community with the help of one-on-one mentors.” The first class of Young Emerging Authors wrote and published chapbooks in 2014.

In 2014 the Telling Room also marked its tenth anniversary with perhaps its most ambitious publication to date: The Story I Want to Tell, released by Tilbury House Publishers, pairs twenty Telling Room student writers with notable contemporary authors such as Richard Blanco, Eggers, Gilbert, Lily King (a Telling Room board member), and Richard Russo, each of whom offers a response to a student’s work. With the inclusion of contributor interviews and writing prompts, the anthology also functions as a textbook for creative writing instructors.

In the next ten years, the Telling Room team plans to expand programs, work in new communities around the state, and engage alumni on a deeper level. “Now that we’re ten years old,” says Davis, “there are students who have aged out of our programs and graduated from high school. We want to provide opportunities for those students to stay involved. Creating a real path to leadership within the organization for our participants is a huge part of fulfilling our mission to increase students’ confidence and make a positive impact in the community.”

A decade ago, it was cofounder Michael Paterniti who suggested the name for the organization that he, Conley, and Corbett had dreamed up. Today, Paterniti reflects on what the Telling Room has become: “The big thing, the really big thing,” he says, “is that this all happened with a hundred shoulders to the stone, people giving away a lot of time for free to create and support programming that dignified young storytellers and gave them a space and audience for their work. From the start, the Telling Room was an idea that everyone owned, and generously passed along.”

Joshua Bodwell is the executive director of the Maine Writers & Publishers Alliance. He has profiled a number of authors for Poets & Writers Magazine, including John Casey, Andre Dubus III, and Richard Ford.

I was really intrigued by your article about The Telling Room. I live in Portland, OR, where there is a similar non-profit called the Independent Publishing Resource Center. Their Outreach Progam not only includes youth, but is also open to adults as well. They host a Certificate Program, which is a two-semester program in DIY Publishing in its sixth year. The cost is $750 for the September-May program, and it covers virtually every aspect of self publishing. It's so nice to hear about other cities doing the same thing. Empowering people to use their words to tell stories, find meaning, and overcome hardship are really important is always a great asset to cultural life.