We leave my pension and Talaat Harb, and Abu il Dahab leads me through Old Cairo, weaving down side streets and through squares to a basement bar: two rooms, a TV, some tables, a bathroom. We order Egyptian Stella beers and sit in the back and talk, while cockroaches dart along the brick wall beside us. He tells me about a television interview he sat for a month ago when he accused other contemporary writers of lying about their support for the political changes taking place in the country. “What’s Egypt going to do now? We don’t know what’s in the future. Now our future lies with the Ikhwan Musliman [the Muslim Brothers].” He describes a plan he has heard about that will place an Islamic cultural center at the heart of every city; the way he describes it makes it sound like an Orwellian attempt to monitor cultural activities and censor books on a local level.

We finish our beers and venture out to an outdoor restaurant serving kushari, the Egyptian street food that mixes noodles, rice, chilies, tomatoes, and other ingredients. “Things will become hard for writers who write like me,” Abu il Dahab says. “Many of my friends and I wrote in, you can say, a free way about sex, religion, politics. It seems like in these days to come, this will be difficult.”

The following evening I return to al-Maadi for a final meeting with Karam Youssef at Kotob Khan. I get off a packed subway train from Tahrir Square and take a taxi to her bookstore to sit surrounded by wooden bookshelves and the bright spines of books. The Vulcan features of Naguib Mahfouz stare down from a poster; from hidden speakers, Bob Dylan is singing with his customary moral certainty.

Youssef introduces me to three writers—a young female short story writer, Eman Abdel Rehim, and two male novelists, Mohamed Rabie and Al Taher Sharkawy—but for the next fifteen minutes she barely allows them to get a word in edgewise. She wasn’t in the square yesterday, but her friends were, and they updated her by cell phone. After pitched battles that led to more than a hundred injured, the anti-Morsi forces succeeded in driving the Muslim Brotherhood members out of the square. “They hit me. Do you think I am going to take it?” she says, speaking, at least this time, metaphorically. “What we discovered in the last few weeks is, maybe, we overestimated them. Yesterday, we saw signs that we were blowing them out of proportion. We went out yesterday, and we can go out next week and the week after.” She waves her fist; she’s sorry she wasn’t there, sorry she missed the fight.

The writers in front of her listen quietly. Abdel Rehim is a merchandiser for a company that exports ready-made clothes to American stores; Rabie is a civil engineer; Sharkawy is the editor of a children’s magazine and the manager of a newspaper. Change and conflict figure prominently in all their work. Rabie was in Riyadh during the Gulf War in the 1990s, and Abdel Rehim also spent years in Saudi Arabia before returning to Cairo as a fifteen-year-old. For Sharkawy, the conflict is more internal. He was educated in religious schools in a community north of Cairo, and he says he had to fight against self-censorship, but eventually he succeeded in putting his own misgivings to rest. “There is nothing in Islam to stop a creator from his creativity,” he says. “On the contrary, poets in the Abbasid period [the Islamic golden era that lasted from 750 to 1258] were very respected by the khalifa and the sultan because they had a connection with unseen powers. As a creator, you have a right to go through all the taboos and break them in order to study them.”

He is fearful of the turn he has seen in the January 25th Revolution, fearful that the Muslim Brothers and the Salafis—the most conservative Muslim political group—will begin to dictate their religious opinions to the population as a whole. “I fear that there is a group that thinks they have the correct interpretation of Islam; I fear that there will be a conflict between my opinion, my fiction, and the ‘correct’ opinion. They think their leaders never make mistakes, that things are ‘sacred’ and cannot be debated.”

The religious turn of the revolution troubles all of them. Recent events have caused Rabie so much stress that it has become hard for him to write; his current novel is three months behind schedule. Abdel Rehim has begun a short story about a civil war in Egypt. “War is becoming part of daily life,” Youssef says.

She has seen Salafis recently appointed to government posts, and she’s begun to hear talk about “cleaning” the films shown in movie theaters, and “cleaning” literature and fiction. Her voice rises as she points out that the works of Kate Chopin and James Joyce were once censored in the United States but liberal-minded people overcame the forces of conservatism and intolerance.

“This country cannot be ruled by Muslims,” she says forcefully. “We will not be Saudi. We will not be Pakistan. We have a big diversity. You cannot do this to Egyptians!”

Postscript: Since October 2012, clashes between secular groups and President Morsi’s Islamist supporters have grown fiercer and larger. The situation escalated in November when Morsi fired a top judge and granted himself additional powers, a move that caused his opponents to compare him to the ousted dictator Mubarak. Despite opposition from women’s groups and secularists, a new constitution championed by Morsi was approved by a national vote on December 22. On the streets, secular disapproval caused protesters to torch the offices of the Muslim Brotherhood’s Freedom and Justice Party in the cities of Suez and Alexandria. In Cairo, Karam Youssef joined protesters in Tahrir Square. “Egypt has been and will always be the Beacon of the Middle East and the Arab world,” she writes. “We will accomplish our revolution no matter how long it takes.”

Stephen Morison Jr. is a contributing editor of Poets & Writers Magazine. He has reported on the literary communities of Afghanistan, China, Jordan, Myanmar, Vietnam, and North Korea. He lives in Madaba-Manja, Jordan. 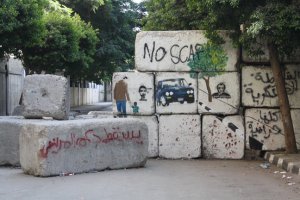