The Light at Dusk: A Profile of Joan Didion

No one, least of all Joan Didion, would consider The Year of Magical Thinking (Knopf, 2005), her National Book Award–winning memoir about coping with the sudden death of her husband, the writer John Gregory Dunne, a happy book. In fact it’s a harrowing journey through a blasted heath of grief and loss, with denial (he wasn’t really sick, he isn’t really dead, no, not really) her only solace. But the writing itself was healing. Didion has never been a great talker—she’s referred to herself as “neurotically inarticulate”—but is, as critics have repeatedly pointed out over the past forty years, peerless on the page, blessed with a fluid yet miraculously compressed prose style that somehow melds the thunderclap clarity of Hemingway and the sinuous depths of Henry James. In eighty-eight fever-pitch days at the typewriter, she wrestled with Dunne’s ghost, emerging, as always, victorious, or close enough. A chaos of emotions was brought into a semblance of order. There was closure, a cauterizing of wounds, a dulling of pain, even a measure of peace. 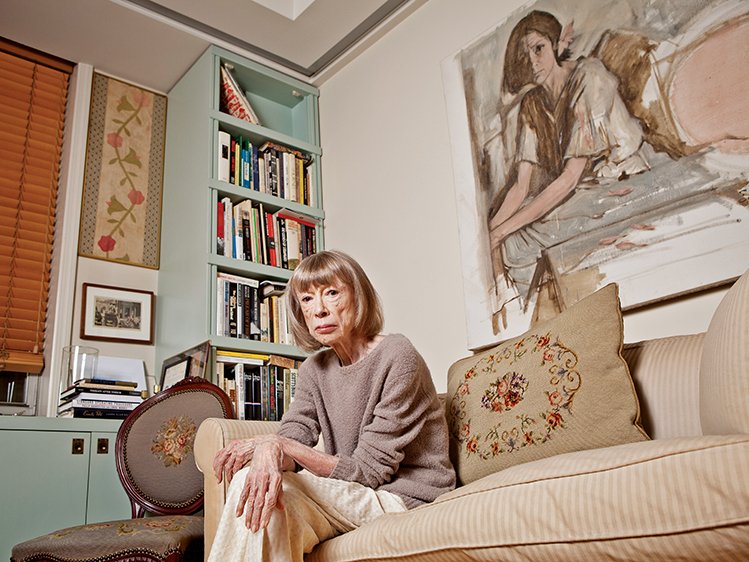 Not this time. Not with her new memoir, Blue Nights, published this month by Knopf, in which she returns to the subject of the loss of a loved one: her daughter, Quintana Roo Dunne, who soon followed her father into the dark, but whose death was not to be talked or thought of, not with any great rigor, and certainly not written about. “I wouldn’t want to have a long conversation about Quintana’s death,” Didion told New York magazine in late 2005. But about two years ago, she did have that conversation—with herself. It was one of those dreaded talks, like the one with your parents, when you’re a teenager, about the facts of life, or when you confront a friend about going into rehab. There was, for one thing, the complication of Quintana’s privacy. Didion wondered whether she had the right to write about Quintana, to reveal her secrets, including the circumstances of her adoption as an infant, her history of emotional and mental problems (including depression, obsessive-compulsive disorder, and borderline personality disorder), and the details of the cascade of illnesses (brain hematoma, pneumonia, septic shock, a coma) that claimed her life at the age of thirty-nine.

“The Year of Magical Thinking was about my life together with John, and it didn’t deal much with Quintana, in part because I wasn’t comfortable with that—Quintana’s life was her life,” Didion says one recent afternoon in her apartment on New York City’s Upper East Side, her voice as small and reedy as her petite, famously frail physique. “But after a while, I just started it, and once I’d made that decision, I knew I had to shake off that doubt. It was time to think about Quintana, and about our relationship. It was time.”

What Didion realized—after finally training on herself the steely, pitiless gaze that in earlier years had stripped the armor off icons like Ronald Reagan and Bob Woodward, leaving them naked as deluded emperors—was that she had achieved, as Quintana’s mother, something a good deal less than perfection. She had failed, as mothers often do, to appreciate the complexity of her daughter’s often surprisingly dark personality, aspects of which manifested themselves early. When Quintana was five, the Dunnes came home to their beach house in Malibu, California, to discover that she had placed a telephone call to Camarillo, a nearby state psychiatric hospital, to inquire about what she needed to do if she was going crazy. On another occasion she called 20th Century Fox to ask what she needed to do to be a star. In her early teens, she produced “a novel I’m writing just to show you,” featuring a girl named Quintana who, believing herself pregnant, tells her parents. “They said they would provide the abortion,” the budding novelist wrote of her fictional parents, “but after that they did not even care about her any more.”

And yet Didion—as she came to see while writing Blue Nights—persisted in treating her beautiful blonde daughter as simply a normal child, hardly more than a doll in a dollhouse, there to be fed, clothed, nursed, and dearly loved but not to wonder much about, not to suspect of roiling, vertiginous depths. “Quintana had more self-knowledge, even early on, than I ever had of her,” she says now in a halting voice. “Did I fail her? Totally. Obviously. I thought of her as a baby, whereas very clearly, if you look at the things that she was doing when she was four and five and six years old, she was not a baby, even then. Even then, she had these dark feelings, dark thoughts.” As if in her own defense, Didion points out a framed photograph of John and Quintana when she was four or five. “Look at her! She doesn’t look like a child with dark feelings, does she?”

She doesn’t. In the photo, Quintana looks like a doll in a dollhouse, albeit one with—if you didn’t know she was adopted—what appear to be her mother’s eyes: cool, sober, steady, disinclined to look away.

In this flowing, nonlinear, often elliptical memoir, Didion recounts her memories of Quintana throughout their lives together, rediscovering—or, more often, discovering for the first time—the significance latent in small episodes, fragments of dialogue, moods, and moments. All of it is poignant, though not all depressing; there are, amid the darkness, pinpricks of light. “In a lot of ways, given all the problems she had, I didn’t give her credit for being as on top of things as she was,” Didion says now about her daughter. Elsewhere she fashions a gauzy shroud of remembrances of others, many now dead: friends from the movies (including actress Natasha Richardson, who died after a freak skiing accident in 2009 and whose mother, Vanessa Redgrave, starred in Didion’s Broadway adaptation of The Year of Magical Thinking), Chicago mob fixer Sidney Korshak, and Washington Post publisher Katharine Graham. But she keeps returning to Quintana, craving her presence, haunted by her non-presence, filled and refilled like a chalice at Communion, replenished by memories that are forever running out.

Unlike The Year of Magical Thinking, then, Blue Nights was not a therapeutic experience for its author. Not exactly. “Well, obviously it was, in a sense—anytime you get something out of your hidden mind into your front mind, I guess you could call that therapeutic,” Didion says quietly. “But in Magical Thinking, dealing with John’s death, I didn’t come to any negative conclusions about my own part in it. I didn’t come out of it thinking that I was in some way more responsible, more culpable, than I had thought. It wasn’t my fault. But to some extent, I came away from this book about Quintana thinking that it was about my failure, and that I had not appreciated that it had been my failure. It’s less finished than Magical Thinking, more sad, more not right. And in Magical Thinking, although I may not have realized it, I was working my way toward a satisfying resolution. If someone dies a natural death and you think that you could not have in any way affected the outcome, you feel that it’s resolved in a satisfactory way. Quintana’s death…” Didion’s hands, fragile and ridged with dark veins, float in the air, describing something that words cannot. “Her death I can’t resolve in a satisfactory way,” she says, her voice just above a whisper. “There’s too much business left unfinished between us. That can never be finished.”

She finished the book, though, and is bracing herself, at the age of seventy-six, for a round of press interviews for which she has no prepared script, no “cool way,” as she puts it, to answer the questions she knows will come. And although Blue Nights proved far more difficult to write than The Year of Magical Thinking—instead of eighty-eight days, it took nearly a year to produce the 188 pages—she seems to take a certain grim satisfaction in the fact that she confronted head-on what was perhaps the most painful aspect of her own history. If her procrastination in writing about Quintana was symptomatic of a fear of revealing secrets—not only her daughter’s but also her own—in the end she got down to business, as she always does, and spared no one, least of all herself.

“I’ve always had the sense that if there was ever any doubt about whether I should deal with something, then I have to deal with it,” she says, some strength reentering her voice. “The image that always comes to my mind is that if you keep your eye on the rattlesnake, the rattlesnake can’t get you.”