The Difference Between Nothing and Nothingness: A Profile of Rae Armantrout

The front yard of Rae Armantrout’s modest house in San Diego is an exotic garden of desert plants, few indigenous to Southern California: euphorbia from Yemen and the Canary Islands, a palm from Madagascar, frankincense from Somalia, proteus from South Africa. All were collected by her husband, Chuck Korkegian, to withstand drought and the couple’s frequent absences while Armantrout, who won the National Book Critics Circle Award and the Pulitzer Prize for her eighth poetry collection, Versed (Wesleyan University Press, 2009), gives readings around the country. In her new book, Just Saying, published this month by Wesleyan, the yard—once “a blond patch,” she writes in “My Taste,” now “a stylish desert, / bronze crushed granite // between bushes / flowering furiously”—makes a number of appearances. “My leaves form bells, / topknots, / small cups of sex, // overweening, unstoppered,” a euphorbia boasts in “Scripture.” “Not one of you / with all your practice // is so extravagantly / coiffed.” 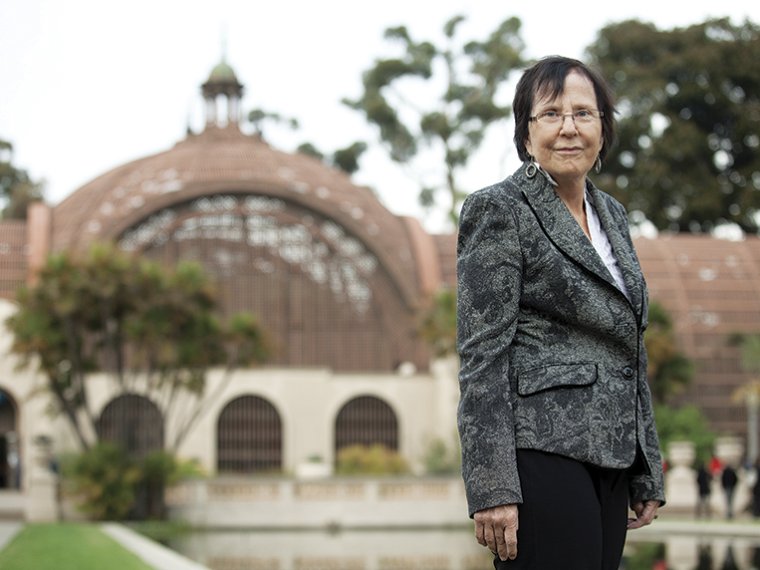 The most haunting vegetal presence of all is an absence. A majestic elm once stood near the house, shading the yard; handsome but inconvenient, its roots invaded the sewer line and lifted the slab of the patio, where the couple envisioned building an outdoor fireplace. With money from Armantrout’s 2008 Guggenheim Fellowship, they had the tree uprooted and carted off. “We came home one day and the tree had been taken down,” Korkegian recalls. “There were a couple of birds that used to perch in the tree now sitting on a butterfly bush, which was so thin that it couldn’t bear their weight. The birds were staring in the direction of where the tree had been. We felt so guilty that we climbed into bed in the middle of the day, depressed.” In Just Saying’s “New Intelligence,” Armantrout imagines an alternate universe in which “I’m gone // and the shadows / of the leaves // of the elm I had pulled down // still make a fuss / over the earth.”

In one way, the passage is unusual in Armantrout’s poetry, in which personal anecdotes are sporadic and spare. Like many of the so-called Language poets, the Bay Area collective with which she was closely associated in the 1970s and ’80s, she mostly steers clear of the confessional mode, looking outward rather than inward, nearly to the point of self-erasure. Her famously short lines—observational, aphoristic, elliptical—focus on what’s being seen and done, not who’s seeing or doing it. “Things that happen to me do get into my poems, but I don’t tend to provide much backstory,” says Armantrout, sixty-five, lounging on the leather sofa in her living room one uncharacteristically drizzly winter afternoon. “If I was walking to the store and I saw something that shocked or intrigued me, I wouldn’t start with, ‘As I was walking to the store…’ I would jump directly to the interesting sight, but it’s me seeing it, right?” Despite the rarity of the word I in her work—when it does appear, it’s often in the voice of someone not herself (occasionally God, in whom she does not believe)—her readers are always aware of the poet’s sharp, controlling intelligence. We feel her there, like that missing elm, her shadow fussing over the page.

In another way, however, the reference to the late, lamented tree—and a world in which the speaker is no more—is part of a new, elegiac mode that entered Armantrout’s work in Versed, written in the aftermath of surgery and chemotherapy treatment in 2006 for what was believed to be an aggressive form of cancer of the kidney. The prognosis was grim; most people with the disease died within six months of diagnosis. “We got on a plane and went to a rainforest resort in Costa Rica, paying attention to each and every moment,” Korkegian remembers with a catch in his throat. “It was a time in which Rae expressed an appreciation for the life that she’d had. She was glad to have written long enough to receive some recognition, but she was also sad—for the end of our relationship, for not being able to see our son get married. There was a sense that time had slowed down, and we did a lot of living in a fairly short time.” Accordingly, in “Dark Matter,” the harrowing sequence that comprises the second half of Versed, the poet struck a deeply personal note, indivisible from her own specific existence, which is to say her coming nonexistence. “Chuck and I are pleased / to have found a spot / where my ashes can be scattered,” she reported in a dream sequence (which happened to parallel an actual incident) in “Around.” “Death is a smudge / on a film,” she mused in “The Light,” “a spot / on the horizon.”

“Rae’s work has gotten deeper, particularly as she’s gotten older and had some reverses in life,” says her friend of more than forty years, the poet and critic Ron Silliman. “Her struggle with cancer gave her a depth of understanding about confronting death that’s almost without parallel in American poetry. I can’t think of anyone who writes about it as meaningfully as she does.”

As it happened, the tumor on Armantrout’s kidney did not recur; the surgery and chemo were apparently successful. Six years later, the cancer is still in remission, although her regular six-month checkups remain a source of anxiety. The specter of death, that uninvited guest, has crossed the threshold of her thoughts and can never be expelled. “Even if I don’t die of cancer, I’m no longer young, so mortality is often on my mind,” she says matter-of-factly. “I admit that I think about it a lot.” And so, after the thematic detour of Money Shot, which was published by Wesleyan in 2011, the shadows dance again in Just Saying, in which “My dead friends / don’t visit me; // they say I didn’t / know them” (“Remainder”), and in which, in “Ghosted,” “a black monarch / sits, folding / and unfolding / its wings.”

Where their living room once featured a hospital bed, it is dominated, on the gloomy December day of my visit, by a Christmas tree, its multicolored lights burning bright. “A normalcy has returned,” Korkegian ventures, “and the assumption is that we will wake up alive and continue to be so.”

Growing up in the 1950s in the working-class San Diego subdivision of Allied Gardens, built on the Levittown model, Rae Armantrout—she knows little about her unusual last name, as her father, a career Navy man, was adopted—manifested an early interest in poetry. Her mother read children’s verse to her, and, as she grew older, longer, somewhat more complex works such as Longfellow’s “Hiawatha.” But from the very beginning, little Rae seems to have shared the minimalist, imagist instincts of one of her eventual idols, William Carlos Williams. Her first poem, written as a first-grader, read in its entirety:

The little fish swim
around and around
and away.

But there was little in the budding poet’s background that suggested a career in the art. “I didn’t really know for sure that there were any living poets,” Armantrout says. “The idea that you could grow up to be any sort of working artist was completely foreign to me.” After his retirement from the military, her father worked as a janitor at San Diego State University; her mother was a Christian fundamentalist who continued to proselytize her daughter for years after she became an atheist at the age of twelve. “She always had a preacher who thought he knew when the world was going to end, and she was always trying to convince me to convert by X date, though it always passed without anything happening,” she says. “It caused me to not be as close to my mother as I had been, because she thought I was going to hell.”

In the seventh grade, one of her teachers gave her an anthology of modern poetry, edited by Louis Untermeyer, in which she discovered the modernists and found herself drawn to the most radical of them, including Williams, Ezra Pound, T. S. Eliot, Gertrude Stein, and H. D. The same anthology also introduced her to Emily Dickinson, whose abstraction, spirited debates with God, and interest in mortality resonated. “I was surrounded by really conventional thinking, and I could tell that Dickinson wasn’t afraid to challenge convention, argue with God, and so forth,” Armantrout recalls. “I’m sure she was the first woman poet I read who was bold that way, and she still may be the boldest poet we have.” Inspired, Armantrout began to write poems seriously, albeit secretly, “as I didn’t feel they’d be welcomed.” This proved prescient. When her mother discovered some of her poems—which were “melodramatic and dark and bleak,” she says, “in the usual teenage way”—she encouraged Rae to see a psychiatrist. “She thought, ‘You’re unhappy, obviously, so you must be crazy.’”

Armantrout wasn’t happy, but she wasn’t crazy, either. “I grew up inside a fenced yard in a neighborhood where we didn’t know our neighbors very well,” she says. “All I had was my nuclear family, with whom I didn’t always get along. I was pretty isolated, and to be with other people and trust them, to even go up and ask a stranger for directions, was very difficult for me for a while.” At San Diego State, which she attended for a while before transferring to the University of California in Berkeley, “It’s fair to say that I was bored out of my mind,” she wrote in an essay published in Newsweek last year. “When I was eighteen or nineteen…my friends and I would go downtown to stare shyly at the sailors, the tattoo parlors, the whores and trannies. They call that slumming, I know. But we were just looking for color, movement.”

In time, Armantrout and Korkegian, who met at San Diego State, took part in the burgeoning counterculture, living in communal situations and sampling mind-expanding drugs, including LSD. “I was a bad hippie,” she recalls with a smile. “I tried, for a while, but it didn’t take. I didn’t like tie-dyed T-shirts or baking. I tried to string beads but found it extremely boring. I’d read Aldous Huxley’s The Doors of Perception [about his experimentation with mescaline], and was more interested in drugs than beads. I was interested in ways you could see the world differently. I had the realization that everyone has who takes acid—and this is so boring!—that your ego is not that important, and that ambition is not so important, and that love is important. Of course I forgot it later.” She laughs. “No enlightenment lasts. Whatever enlightenments we have fade away, to be replaced by other enlightenments.”